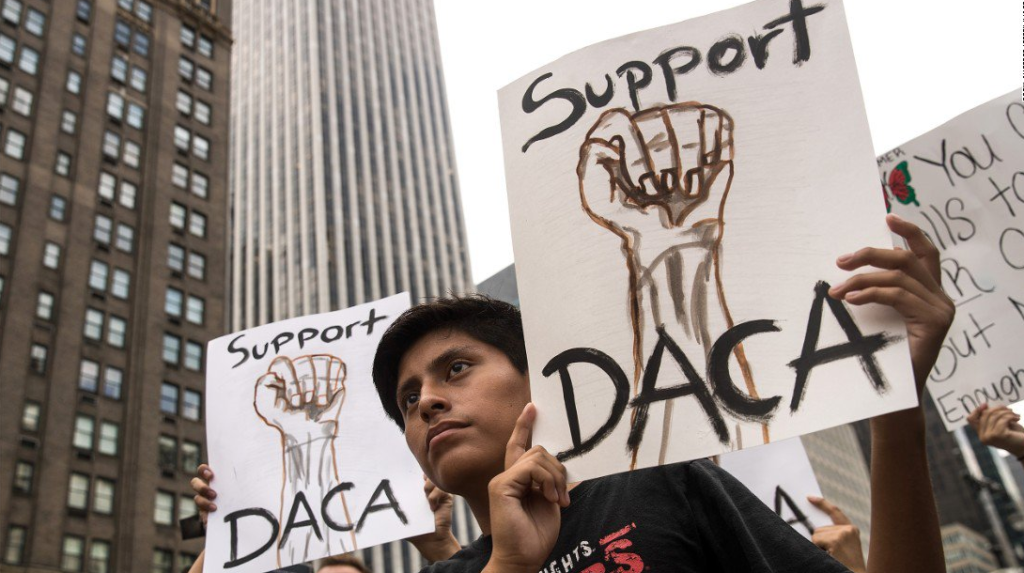 15 States Are Suing Trump Over DACA

Fifteen states and the District of Columbia filed a lawsuit on Wednesday challenging President Donald Trump’s decision to end protections and benefits for young people who were brought into the United States illegally as children.

The multistate lawsuit filed by a group of Democratic attorneys general on Wednesday to protect beneficiaries of the Deferred Action for Childhood Arrivals program argues their state economies will be hurt if residents lose their status.

The lawsuit seeks to block Trump’s decision and maintain DACA.

The lawsuit claims Trump’s decision was “motivated, at least in part, by a discriminatory motive” against Mexicans, who are the largest beneficiary of the program. It points to his statements from the 2016 presidential campaign.

The attorneys general also argue the government has not guaranteed DACA recipients that their application information will not be used “for purposes of immigration enforcement, including identifying, apprehending, detaining, or deporting non-citizens.”

New York’s Attorney General Eric Schneiderman took the lead filing the case in the Eastern District of New York. He said that 42,000 New Yorkers participate in DACA, and the end of the program will be “devastating” for them and would cause “huge economic harm” to the state.

In commenting on the suit, the U.S. Department of Justice noted that DACA was implemented under an executive order by former President Barack Obama, not through congressional action.

“While the plaintiffs in today’s lawsuits may believe that an arbitrary circumvention of Congress is lawful, the Department of Justice looks forward to defending this Administration’s position,” spokesman Devin M. O’Malley said.

Trump, who delayed the end of the program until March 5, shifted responsibility to a Congress controlled by his fellow Republicans, saying it was now up to lawmakers to pass immigration legislation that could address the fate of those protected by DACA.

But the governor of Washington, whose state joined the lawsuit, criticized Trump for distancing himself from a final decision on the program.

Trump said Tuesday he still has “great heart” for the dreamers.

“The president has tried to shirk responsibility for this, but let’s be clear, it is his hand on the knife in these people’s backs,” said Washington Governor Jay Inslee at a press conference announcing the suit. “He can’t just put it on Congress. It is his responsibility to fix this.”

Other claims in the lawsuit are based on the Administrative Procedure Act, arguing the White House did not follow the correct process in changing the policy.

Legal experts have said that court challenges to Trump’s actions could face an uphill battle, since the president typically has wide authority when it comes to implementing immigration policy.