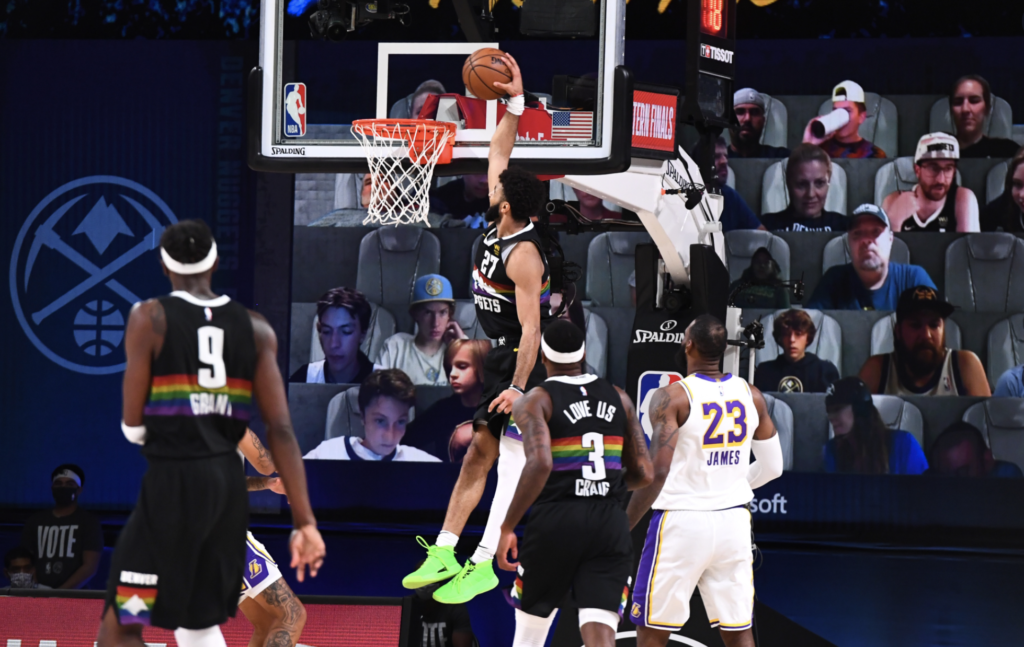 A Star Is Born In The Bubble

An unassailable truth of the NBA bubble is the resilience of the Denver Nuggets.

It was on full display once again on Tuesday as Denver bounced back from an excruciating Game 2 loss to top the Los Angeles Lakers for a 114-106 Game 3 win in the Western Conference finals.

After three quarters, the Nuggets looked ready to cruise to victory, taking a 93-75 lead into the game’s final stanza. But Los Angeles wasn’t done. Frank Vogel’s Lakers switched to a 2-3 zone for much of the fourth quarter, flustering a previously pinpoint Nuggets offense and reeling off a 19-2 run.

At one point the Lakers forced six straight turnovers, with three steals courtesy of an aggressive Rajon Rondo. They cut their deficit to as close as 101-98 with 3:53 remaining.

But the Nuggets responded with a run of their own, regaining their offensive composure to control the game’s final minutes. A pair of Jamal Murray 3-pointers including this 29-foot dagger with 53.3 seconds remaining ensured that the Lakers would not rally again.

The Nuggets got big games from their stars with Murray logging 28 points, 12 assists and eight rebounds. Nikola Jokic tallied 22 points, 10 rebounds and five assists and continued to frustrate his All-NBA Defensive Team counterpart Anthony Davis in the post.

Jerami Grant added a career playoff-high 26 points as the Nuggets beat the vaunted Lakers defense to the tune of a 54.8% shooting clip from the field.

The Nuggets also owned the boards en route to a 44-25 rebounding advantage. The Lakers had more fouls (26) than they did rebounds and Davis didn’t record his first rebound until the fourth quarter. A 6-for-26 (23.1%) effort from beyond the 3-point line didn’t help their cause.

Davis finished with 27 points, but did little elsewhere, tallying two rebounds, one assist and one steal. LeBron James led the Lakers with 30 points to go with 11 assists and 10 rebounds for his 26th career playoff triple-double.

But his effort and the Lakers rally were too little too late after the Nuggets built a 91-71 third-quarter lead for the Lakers’ largest deficit of the playoffs.

Instead of the historic NBA death knell that is a 3-0 playoff hole, the Nuggets now face a much more manageable 2-1 deficit. Now the Nuggets, who have historically rallied from a pair of 3-1 deficits in this postseason, will look to avoid the same hole with a chance to tie the series in Thursday’s Game 4.