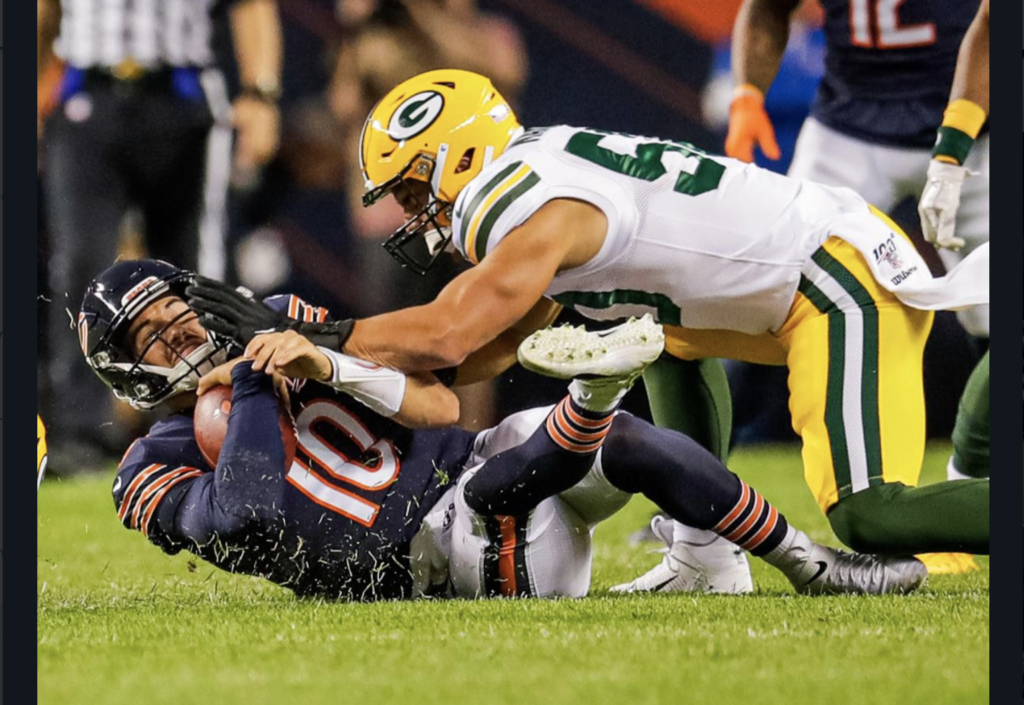 After All That Hype, Same Old Bears

Matt Nagy’s team, opening the NFL’s 100th season with expectations higher than Willis Tower, put on an offensive performance even the Chicago Staleys would have laughed at.

A 10-3 loss to the rival Green Bay Packers stung in many ways, but the offensive ineptitude Thursday night in Soldier Field had the Chicago Bears coach shaking his head.

“Obviously unacceptable,” Nagy said of his offense’s performance. “Starts with me, so this — I just told the guys in there, this is not who we are. I was proud of our defense. I thought they played their ass off tonight. Offensively, not good enough. And we’re going to fix it. Our guys know that.

“We have a locker room of high-character people. That’s why we bring these guys in because what they do is, they don’t point fingers. The defense doesn’t point fingers and say the offense should have played better. That’s not how we roll.”

How Nagy’s team rolled Thursday night looked like a Sisyphus pushing that boulder uphill for all eternity and watching it fall back down. One step forward, 1,000 back.

As with all offenses, the Bears’ struggles started with the quarterback. Mitchell Trubisky entered the season with the hope of making a Year 3 leap. There was not a stride to be seen Thursday.

“Not that good. Not that good,” a somber Trubisky responded when asked how he’d assess his play. “Definitely left a lot of plays out there. Just myself as an offense, we really couldn’t find a rhythm there. Struggled on third down, obviously. That was apparent. We’ve got to be better on first and second down, to stay in manageable situations on third down. I felt like I made some good throws here and there, made some good decisions for the most part, but I think it was just sloppy by myself and as an offense as a whole, just going through all our procedures. It was just tough. We couldn’t find a rhythm.

“It’s really frustrating because it’s very uncharacteristic of this offense, especially the way we’ve been practicing. But the type of guys we’ve got in there, obviously we had our defense, special teams battled all night to keep us in it, so we’ve just got to continue to pull together, look within ourselves and find answers to make sure we’re not feeling like this again.”

The most frustrating thing for Bears fans is that the same issues that plagued Trubisky last year reared their head again Thursday night. The 25-year-old quarterback hesitated too often, took a Bortles-esque time making decisions, didn’t always trust his reads, gave up on plays too soon and wasn’t nearly accurate enough to be successful. Trubisky’s final stat line reads 26-of-45 passing for 228 yards, zero TDs and one INT for a 62.1 passer rating with five sacks taken. It doesn’t include the at-least-three other INTs dropped by Packers defenders.

“I definitely feel like I let a lot of my teammates down and the fans down with the way I played, and I definitely felt like I could have done better,” Trubisky said.

Part of the Bears’ issue was Nagy’s play-calling. If Trubisky is going to play like he did Thursday, he must be treated like a game-manager. Calling 45 pass attempts in a one-score game isn’t a recipe for a winning Bears product.

“I didn’t help (Trubisky) at all,” Nagy said. “I didn’t help him. I’ve got to help him. And then we’ve got to get the run game going. That’s 15 rushes in 65 plays, you’re down 7-3, but we — again, that’s something that we’re going to as a staff get back together and we’re going to figure out, okay, what are we doing as coaches and how can we get better to help these kids out.”

The other aspect surely grinding on the Bears is that their defense kept Aaron Rodgers in check the majority of the night, holding the former All-Pro QB to just 203 yards passing with one touchdown and sacking him five times. Chicago allowed Rodgers to get loose on one drive out of 12 (not counting the game-ending kneels). That one drive beat them. Normally, if you hold the Packers to 10 points, you’ve got a great shot to win the game.

Not so on this Chicago night.

“In my head, I was thinking maybe we are going to put up all the points in the second half,” guard Kyle Long said of the offensive ineptitude. “Like honestly, because I’ve been a part of these games before where 12 (Rodgers) is out there and he’ll have no points in the first half and then he’ll come out and put up 50 points, or whatever it is. That’s just the way that this game has been.

“Bears-Packers, it’s always been runs — I’m not talking about running the ball, I’m talking runs back and forth like a good basketball game or something. We just didn’t really have anything come to fruition for us. We were knocking on the door. We were in the damn driveway and we couldn’t get in the front door.”

To a man, Bears players didn’t pin the loss on Trubisky’s struggles but noted the entire offense was discombobulated, with penalties and an assortment of other issues. The Bears were a woeful 3-of-15 on third downs, much of which had to do with being in long down-and-distances.

Added running back/receiver Tarik Cohen: “As an offense, your one job is to score points, and we didn’t do a very good job of that tonight. So that was very frustrating. Going out there numerous times and having drives stall, it just puts that hump on your back, makes you angry, that you’re not doing what you’re supposed to do.”

It was a disappointing start to the season for Chicago, but solace remains: The Bears lost to the Packers last year to start the season and finished with a division-winning 12-4 record. In order to defend that NFC North title, Nagy’s team will have to score more than three points from here on out.

As he said, three points is ridiculous.