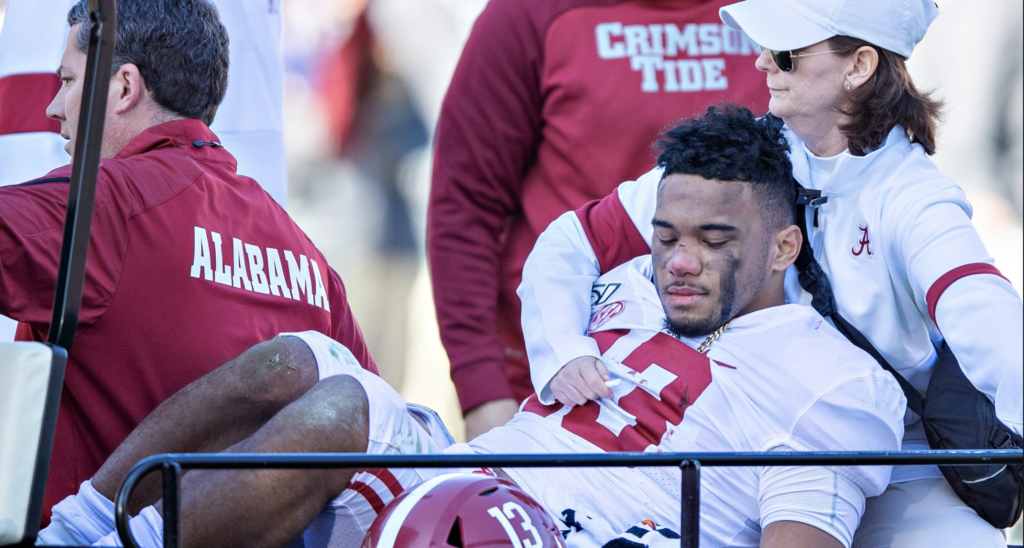 Alabama quarterback Tua Tagovailoa will miss the remainder of this season after suffering a dislocated right hip Saturday in the Crimson Tide’s 38-7 win over Mississippi State, Alabama orthopedic surgeon Dr. Lyle Cain said in a statement.

Tagovailoa also suffered a posterior wall fracture, sources confirmed to ESPN, and medical officials are continuing to evaluate his injury to determine the best course of treatment. He is expected to make a full recovery, Cain said.

Tagovailoa was injured with three minutes remaining before halftime when he was brought down by two Bulldogs defenders while rolling to his left on a third-down play. He suffered a bloody nose and couldn’t put pressure on his right leg when he was helped up by trainers. He was carted off from the field and eventually airlifted back to Birmingham for CAT scans and MRIs.

Crimson Tide coach Nick Saban said after the game that he didn’t think the injury was related to the ankle injury that made Tagovailoa a game-time decision for Saturday’s game. “It’s kind of a freak thing that you seldom see,” he said.

“He was good, at least as good as he was a week ago in terms of his ability to move,” Saban added. “I don’t think anything he did affected his performance in the first half. So the guy played, and I thought he played really well. And we hate it that he got injured. We hate it for him. We hate it for his family. I hate it when any player on our team gets injured. So Godspeed to him and his entire family, and our thoughts and prayers are with them and hope this is not so serious it has any long-term effect on his future as a player.”

Saban told ESPN’s Molly McGrath that the drive was going to be Tagovailoa’s final one of the game. Saban said Tagovailoa was still in the game to practice a two-minute drill.

“That was going to be his last series,” Saban said. “We were going to do two-minute before the half was over just for practice. First, we’ve got to block them better so he doesn’t get sacked. It’s too bad.”

McGrath reported that Tagovailoa was screaming in pain as trainers helped lift him off the cart.

Saban said the coaching staff considered putting backup quarterback Mac Jones into the game for Tagovailoa before the final series.

“We can second-guess ourselves all we want,” Saban said. “We told Mac to warm up. We were going to go two-minute before the half, and Tua wanted to go in the game. So I don’t really make a lot of decisions about guys getting hurt. … We had total confidence in Mac, and Mac did a good job when he went in.”

Tagovailoa, a Heisman Trophy contender and potential top-10 pick in next spring’s NFL draft, had surgery on his right ankle Oct. 20, a day after he was injured in the Crimson Tide’s 35-13 victory over Tennessee.

Surgeons performed a “tightrope” procedure on his right ankle, in which they drilled a hole from his fibula into the tibia and cast three tightropes through the bone and cinched it down to tighten it, according to Dr. Norman Waldrop, who was part of the medical team that performed the procedure on Tagovailoa’s left ankle following the SEC championship game last season.

Tagovailoa missed Alabama’s 48-7 win over Arkansas on Oct. 26 but returned to start against LSU last week. His mobility was limited, but he still completed 21 of 40 passes for 418 yards with four touchdowns and one interception in the Crimson Tide’s 46-41 loss to the Tigers.

“The way I look at this whole thing is: Tua’s our No. 1 quarterback, and if he’s physically able to play, we want to play him in the game,” Saban said when asked about the value of putting Tagovailoa in the game when the Tide were ahead by 28 points. “That’s what he wanted to do, and that’s what our team wanted to do. If I would have known — knowing that anything bad was going to happen, certainly I wouldn’t have put him in that situation. But we’re a team. We’re a team that’s trying to get better … to see if we can finish the season the way we want.”

Whether Tagovailoa’s injury impacts Alabama’s chances to make the College Football Playoff might not be known for a few weeks.

“If these reports prove to be true, our thoughts and prayers go out to Tua and his family,” CFP executive director Bill Hancock said to ESPN. “As for football, three weeks remain in the season, and the selection committee doesn’t project ahead.”