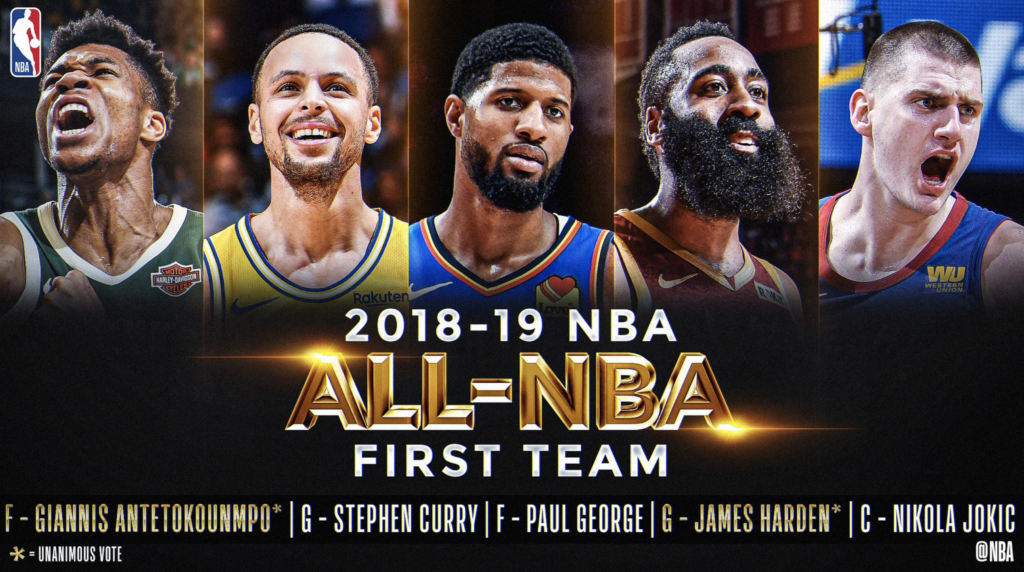 All-NBA Equals All The Money For A Few Guys

The three finalists for the NBA MVP award — Giannis Antetokounmpo, James Harden and Paul George — led the balloting for the All-NBA teams, announced by the league Thursday afternoon.

By making a second consecutive All-NBA team, Antetokounmpo put himself in line to receive the largest contract in NBA history next summer: a five-year deal from the Bucks worth $247.3 million, according to ESPN’s Bobby Marks. Antetokounmpo will be one year away from free agency next July.

LeBron James was not a first-team All-NBA selection for the first time since 2007, when he was named to the second team.

James did, however, extend his streak of consecutive All-NBA selections to 15 — tying him with Kobe Bryant, Tim Duncan and Kareem Abdul-Jabbar for the most in history — by earning a third-team nod in his first year with the Los Angeles Lakers.

The second team consists of Damian Lillard and Kyrie Irving at guard, Kevin Durant and Kawhi Leonard at forward and Joel Embiid at center.

Joining James on the third team are Russell Westbrook and Kemba Walker at guard, Blake Griffin at forward and Rudy Gobert at center.

Thursday was important for several players, as it determined whether they would be eligible for a designated veteran extension — better known as a supermax — this summer by making one of the three All-NBA teams. Lillard and Walker qualified, while Bradley Beal and Klay Thompson did not.

The Portland Trail Blazers and Charlotte Hornets now have decisions to make. Portland can offer a four-year extension to Lillard worth $191 million this summer and Charlotte can extend a five-year, $221 million contract to Walker as a free agent on July 1; figures are according to Marks.

Lillard is expected to sign the extension in July, per sources. It is unclear, after the Hornets missed the playoffs, what Walker will decide to do as an unrestricted free agent.