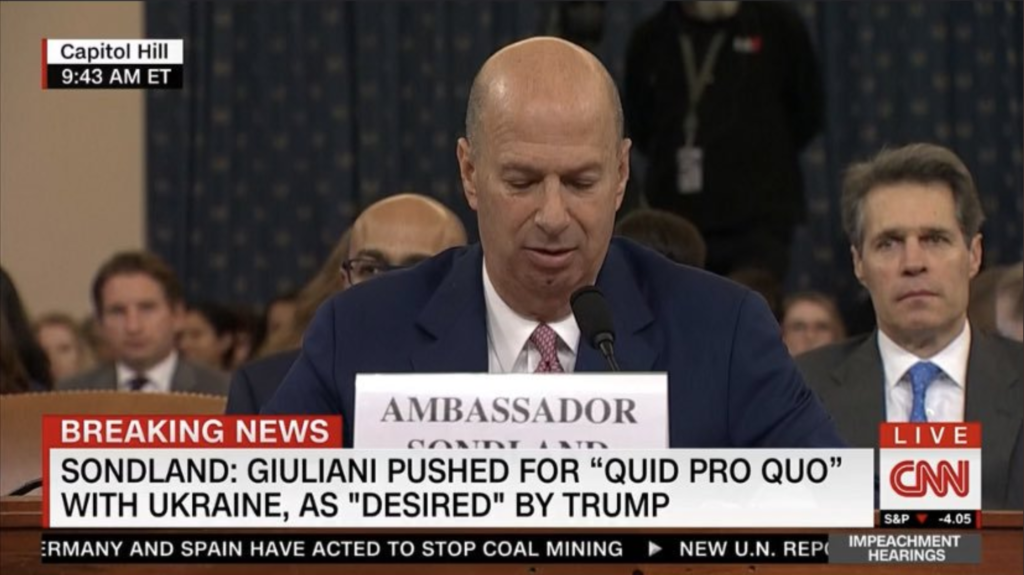 A U.S. diplomat who is a key witness in the impeachment inquiry into President Donald Trump said on Wednesday he worked with Trump’s personal attorney Rudy Giuliani on Ukraine issues on “the President’s orders.”

Gordon Sondland, the U.S. ambassador to the European Union, said in prepared remarks to the investigation that Giuliani’s efforts to push Ukrainian President Volodymyr Zelenskiy for investigations into Trump’s political rivals “were a quid pro quo for arranging a White House visit” for the Ukrainian leader.

Quid pro quo is a Latin term meaning a favor exchanged for a favor.

Sondland, a wealthy hotel entrepreneur and Trump donor, said U.S. Secretary of State Mike Pompeo was aware and “fully supportive” of their efforts on Ukraine.

Sondland was appearing on Wednesday before the House of Representatives Intelligence Committee, which is taking the lead in the impeachment inquiry that threatens Trump’s presidency. He smiled and laughed as he took his seat at the witness chair in the hearing room on Capitol Hill in the fourth day of public proceedings in the investigation.

The inquiry focuses on a July 25 phone call in which Trump asked Zelenskiy to carry out two investigations that would benefit him politically including one targeting Democratic political rival Joe Biden. The other involved a debunked conspiracy theory embraced by some Trump allies that Ukraine, not Russia, interfered in the 2016 U.S. election.

Ahead of his request that Zelenskiy carry out the two investigations, Trump froze $391 million in U.S. security aid approved by Congress to help Ukraine combat Russia-backed separatists in the eastern part of the country.

Democrats have accused Trump of using the frozen aid and Zelenskiy’s desire for an Oval Office meeting as leverage to pressure a vulnerable U.S. ally to dig up dirt on political adversaries. Trump is seeking re-election next year.

Sondland was one of three Trump allies who largely took over U.S.-Ukraine policy in May, with Giuliani also playing a key role despite holding no official government position. Career U.S. diplomats have portrayed Sondland in their testimony as a central figure in what became a shadow and “irregular” Ukraine policy operation, undercutting official channels and pressing Kiev to investigate the Bidens.

Trump has denied wrongdoing, called the inquiry a witch hunt and assailed some of the witnesses including current White House aides.

Sondland was tapped as Trump’s envoy after he donated $1 million to the president’s inauguration. In October, Trump called him “a really good man,” but after Sondland’s amended statement to House investigators this month the president told reporters at the White House, “I hardly know the gentleman.”

The investigation could lead the House to approve formal charges against Trump – called articles of impeachment – that would be sent to the Republican-controlled Senate for a trial on whether to remove him from office. Few Republican senators have broken with Trump.

Senate Majority Leader Mitch McConnell said on Tuesday it was “inconceivable” that two-thirds of the Republican-controlled chamber would vote to convict Trump.