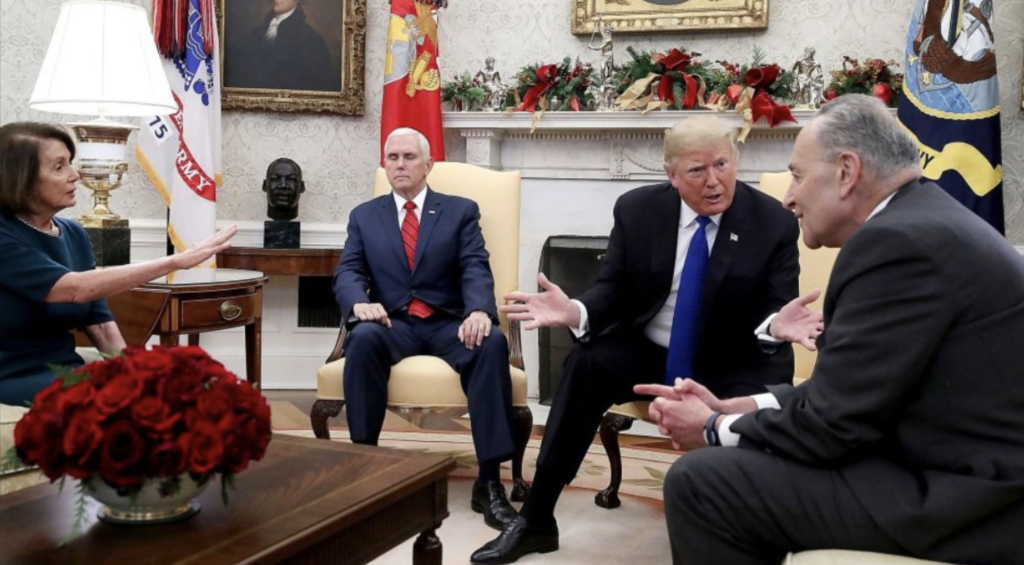 America, We Are Screwed

President Donald Trump openly fought with the top two Democratic lawmakers in the Oval Office on Tuesday about government funding, throwing into question whether a deal to avert a government shutdown was possible ahead of a deadline next week.

In a remarkable public argument, the likes of which is seldom seen before cameras, Trump brawled with U.S. Senate Democratic Leader Chuck Schumer and House Democratic Leader Nancy Pelosi about paying for a wall on the U.S.-Mexico border that they see as ineffective and wasteful.

“If we don’t get what we want, one way or the other – whether it’s through you, through a military, through anything you want to call – I will shut down the government,” Trump said as the heated argument drew to a crescendo.

“I am proud to shut down the government for border security, Chuck, because the people of this country don’t want criminals and people that have lots of problems and drugs pouring into our country,” he said before reporters left their ringside seats.

While Trump’s fellow Republicans control both the House and the Senate until next month, Democratic support is needed to pass any spending legislation.

If the impasse cannot be resolved by Dec. 21, about one-quarter of the federal government immediately would be left without funding. Money for the rest of the government already has been appropriated.

Trump has asked Congress for $5 billion for border security, while Schumer and Pelosi have offered to extend funding at current levels, around $1.3 billion. That is less than the $1.6 billion a bipartisan Senate committee approved.

While the battle over border security is contentious, the money being negotiated is a small portion of a $450 billion bill to keep agencies operating through next September.

In an interview with Reuters later in the day, Trump did not rule out a compromise on the funding. “We have to see what else is entailed,” he said.

The meeting did not last long after reporters were ushered out of the Oval Office.

But the harsh words continued during a closed meeting of House Democrats. According to an aide in the room, Pelosi said Trump’s fixation with building a wall was “like a manhood thing for him. As if manhood could ever be associated with him.”

Pelosi told reporters she had asked Trump to pray about resolving the dispute, recounting the biblical story of King Solomon asking God for wisdom.

Pelosi told reporters that later in the day that she and Trump spoke by telephone, and the president said he was reviewing the offer made by Democrats during the White House meeting.

Despite the rancor, Senate Majority Leader Mitch McConnell, a Republican, told reporters, “I’d still like to see a smooth ending here and I haven’t given up hope that’s what we’ll have.”

If there is no deal, Trump would be shuttering the very agency in charge of border security – the Department of Homeland Security. In past shutdown battles, workers deemed “essential” were instructed to work.

Other federal agencies that also would face closures include the departments of State, Commerce and Agriculture, and visitors would not be allowed into federal parks.

At the Pentagon, Lieutenant Colonel Jamie Davis said there were no plans now for the U.S. military to build sections of the border wall, though the Defense Department could under current law pay for some border barrier projects “such as in support of counter-drug operations or national emergencies.”

The rocky White House meeting was the first Trump held with Pelosi and Schumer since Democrats won control of the House in Nov. 6 elections, possibly foreshadowing battles to come next year.

Trump told Reuters he thought it would be possible to work on legislation with Democrats – unless they launch a barrage of investigations into his administration and policies.

“We’re either going to start the campaign and they’re going to do presidential harassment. Or we’re going to get tremendous amounts of legislation passed working together,” he said.

Tuesday’s fight kicked off when Pelosi told Trump that Americans did not want to see a “Trump shutdown,” touching a nerve. Trump cut off Pelosi, arguing that he could not advance a funding bill without Democratic votes in the Senate.

“If I needed the votes for the wall in the House, I would have them in one session. It would be done,” Trump bragged.

Senior White House staff watched the melee from the edges of the room.

“I don’t think we should have a debate in front of the press on this,” Pelosi said, adding, “Let’s call a halt to this.”