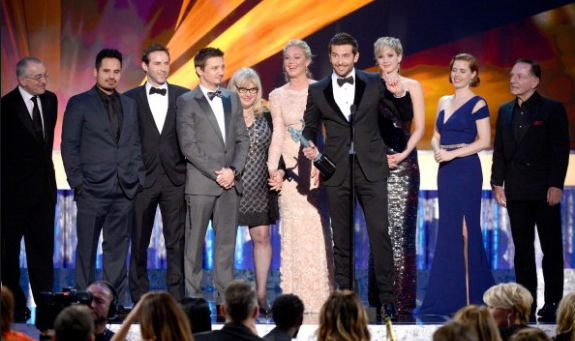 SAG Awards are About the ‘Hustle’

David O. Russell’s “American Hustle” took the Screen Actors Guild Awards’ top honor for outstanding cast on Saturday night, beating out Steve McQueen’s acclaimed “12 Years a Slave.” Because actors make up the largest branch of the Academy of Motion Picture Arts and Sciences, the SAG Awards (which last year picked “Argo”) are considered one of the best indicators of the Oscars.

Just days ago, the Academy Awards nominations set up a trio of front-runners, bestowing 10 nods on “American Hustle” and “Gravity,” and nine on “12 Years a Slave.” But though no actor was individually honored by the guild for “American Hustle,” the Abscam tale now appears to have an edge over its Oscar rivals.

Speaking for a cast that includes Amy Adams, Christian Bale and Jennifer Lawrence, Bradley Cooper credited Russell as the epitome of the actor’s director.

Saturday’s awards were a somewhat low-key affair with a few memorable speeches but no earthquakes in a rapidly solidifying award season. The night’s acting winners – Matthew McConaughey (“Dallas Buyers Club”), Cate Blanchett (“Blue Jasmine”), Lupita Nyong’o (“12 Years a Slave”) and Jared Leto (“Dallas Buyers Club”) – are each probably the favorites of their categories.

One of the night’s biggest winners was Nyong’o, who won supporting actress over Lawrence. Though “12 Years a Slave” is only her feature film debut, the Kenyan actress has been hailed for her red-carpet style and grace this awards season. Her speech was both composed and emotional – the kind of display that can turn Oscar voters’ heads.

She thanked McQueen “for taking a flashlight and shining it underneath the floorboards of this nation and reminding us what it is we stand on.” And she recalled the celebratory phone call to her father when she got the part.

The “Breaking Bad” victory lap continued as the show took honors for outstanding dramatic cast and for lead actor Bryan Cranston. For his indelible performance as teacher-turned-meth dealer, Cranston added his second lead actor SAG Award, to go with his recent Golden Globe win and his numerous Emmys.

“We have the nicest bunch of white supremacist Nazis I have ever worked with,” said Cranston, looking over his former cast mates. “I swear to you I would kill you all over again.”

Julia Louis-Dreyfus has been a mainstay at award shows recently, both for her acclaimed HBO series “Veep” (for which she won an Emmy) and the romantic comedy “Enough Said” (for which she was nominated for a Golden Globe). She won a SAG trophy for female actor in a comedy series for “Veep,” and slyly mocked the award season crush by first thanking the Hollywood Foreign Press and then the Academy of Motion Picture Arts & Sciences.

“It’s hard you know because it’s awards season and things get confusing, much like elections,” said Louis-Dreyfus.

SAG’s lifetime achievement award was given to Rita Moreno, the 81-year-old “West Side Story” actress whose career has spanned Broadway, television and music. Introduced by Morgan Freeman, the much-honored Latina legend danced to the podium before a standing ovation and let out a gleeful expletive.

Moreno serenaded the SAG audience with a few bars from “This Is All I Ask”:

“And let the music play/ As long as there’s a song to sing/ And I will stay younger than spring.”

Actor in a movie or miniseries: Michael Douglas, “Behind the Candelabra”

Actress in a movie or miniseries: Helen Mirren, “Phil Spector”