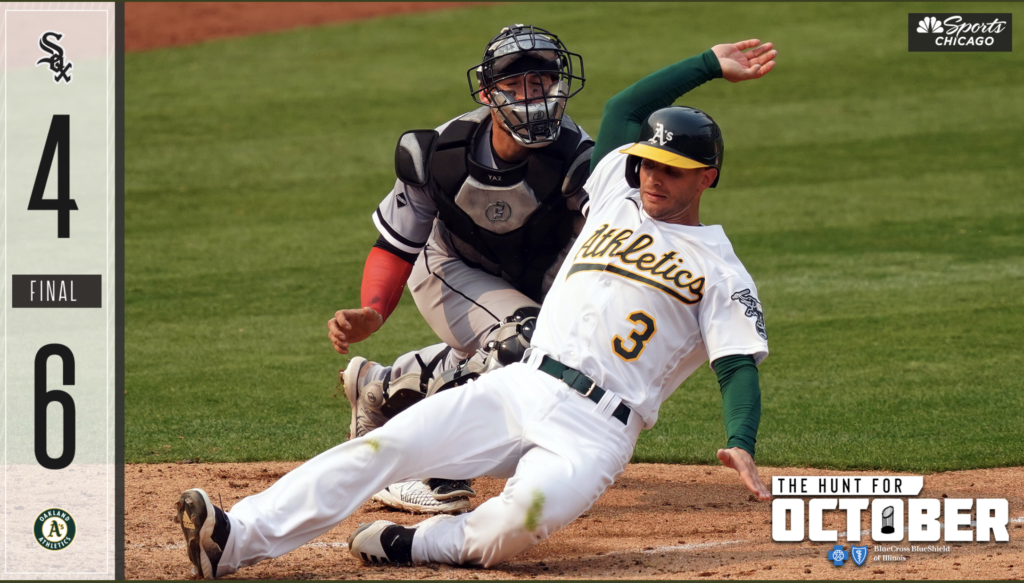 The Oakland Athletics have advanced to the ALDS. Thursday afternoon at RingCentral Coliseum in Oakland, the A’s defeated the Chicago White Sox in the winner-take-all Game 3 of their Wild Card Series matchup (OAK 6, CWS 4). The A’s are moving on to the Southern California bubble and will take on the Houston Astros when the ALDS begins Monday.

Thursday’s game featured a little of everything and a lot of pitching changes. The A’s erased an early 3-0 deficit to earn their first win in a winner-take-all postseason game in nearly five decades. This was also their first postseason win after trailing by at least three runs since Game 3 of the 1988 ALCS against the Red Sox. That was 24 games ago.

The Wild Card Series win is the A’s first postseason series win since the 2006 ALDS. They were 0-6 in their last six postseason rounds (one ALCS loss, two ALDS losses, three Wild Card Game losses). Here are five takeaways from Game 3.

And I do mean massive. White Sox rookie Luis Robert opened the scoring with a long — very long — solo homer off Mike Fiers in the second inning. It left his bat at 112.2 mph and landed 487 feet away from home plate. It is the second-longest homer in baseball this year, behind a 495-foot regular season blast by Ronald Acuna Jr.

Robert went 2 for 8 in the first two games of the Wild Card Series and really limped to the finish in the regular season, hitting .136/.237/.173 with a 34.0 percent strikeout rate in September. He is insanely talented though, and with players this naturally gifted, they’re always one swing away from making an impact. Robert certainly did in Game 3.

One by design, one out of necessary. Rookie Dane Dunning got the Game 3 start for the White Sox but his leash was very short. In fact, as soon as Tommy La Stella singled to lead off the first inning, rookie southpaw Garrett Crochet was up and throwing in the bullpen. Dunning faced four batters and allowed two hits before Crochet took over.

Mike Fiers, meanwhile, was hit very hard. He gave up a Tim Anderson infield single and a Jose Abreu double around several loud outs in the first inning, then surrendered the long Robert home run in the second. All told, Fiers faced 11 batters, allowed eight balls in play, and their average exit velocity was 94.6 mph. Yusmeiro Petit came in and stranded the bases loaded in the second.

Ultimately, Oakland’s bullpen outpitched Chicago’s, though neither’s bullpen was all that great. The White Sox were done in by walks. Nine pitchers combined to walk nine batters, including six walks in an 11-batter span at one point in the fourth and fifth innings. Three of those nine walks came around to score.

The game’s big blow was Chad Pinder’s go-ahead two-run single in the fifth inning. The White Sox gift-wrapped the A’s that rally — they loaded the bases on two walks and a catcher interference — and Pinder, who was limited to 24 games by injuries during the regular season, came through with the two-out knock.

The two starters combined to throw 2 1/3 innings and the two teams combined to use 15 relievers. Only two of those 15 relievers (Evan Marshall and Frankie Montas) recorded more than four outs, and A’s closer Liam Hendriks got the save despite throwing 49 high-stress innings Wednesday. Game 3 was a non-stop parade of relievers.