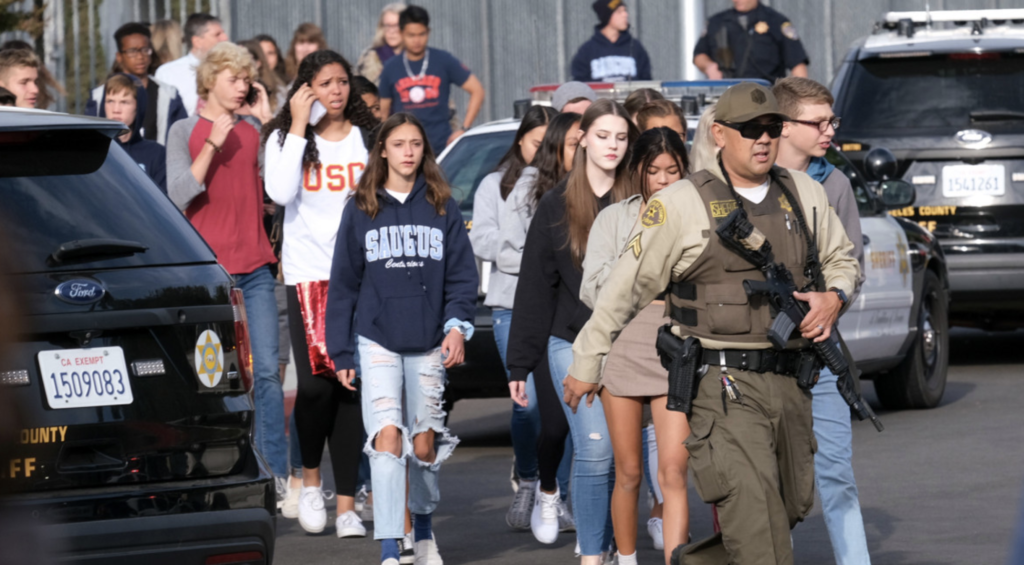 Another Day, Another School Shooting #ThisIsAmerica

Authorities said the shooting at Saugus High School that left two students dead and three wounded occurred over a 16-second period in which a classmate pulled out a gun in the quad area and opened fire.

The gunfire broke out at 7:30 a.m., when students at the school were scheduled to be in their first-period classes, said Los Angeles County Sheriff Alex Villanueva.

Paramedics rushed onto the campus, treating the wounded, and law enforcement officers searched nearby neighborhoods for a 16-year-old boy they thought had fled after the shooting. Authorities later said the suspect, identified by neighbors and sheriff’s officials as Nathaniel Berhow, was found on campus with a self-inflicted gunshot wound to the head.

Officials said he was taken to a hospital and is in grave condition. Authorities said a message referencing the shooting, thought to have been posted before the attack, appeared on an Instagram account believed to be linked to the suspect. But Instagram said late Thursday, as first reported by BuzzFeed News, that the account didn’t belong to the teenager. A company representative said via email that the account has since been disabled “for violating our policies.”

Sheriff’s Capt. Kent Wegener said the teen was standing in the quad when he pulled a .45-caliber handgun from his backpack and opened fire on other students before turning the gun on himself. It was the suspect’s 16th birthday, authorities said.

The scene at the school at 21900 Centurion Way was chaotic, with teenagers walking in a line behind armed law enforcement officers with their arms raised in the air. Many of the injured were treated in a grassy area on campus before being placed on gurneys and taken to ambulances in the school’s parking lot.

Some students remained locked in classrooms for more than an hour amid the massive police presence. Eventually, they were led off the school grounds by deputies. Some were in tears. As they walked, one student asked aloud a question on the minds of many others: “What kind of a world is this?”

The schools were briefly locked down as authorities searched for the shooter. Deputies had been centering much of their focus on the brushy area behind the high school adjacent to a creek. Law enforcement officials also searched the backyards of homes along Sycamore Creek Drive. After about an hour, authorities determined the suspect hadn’t left campus.

Thursday’s shooting came two months after six students at the high school were detained on felony charges after authorities were alerted to threats the teenagers had made online. A Hart Union staff member discovered the social media posts “regarding committing acts of school violence” and alerted authorities, according to the Sheriff’s Department.