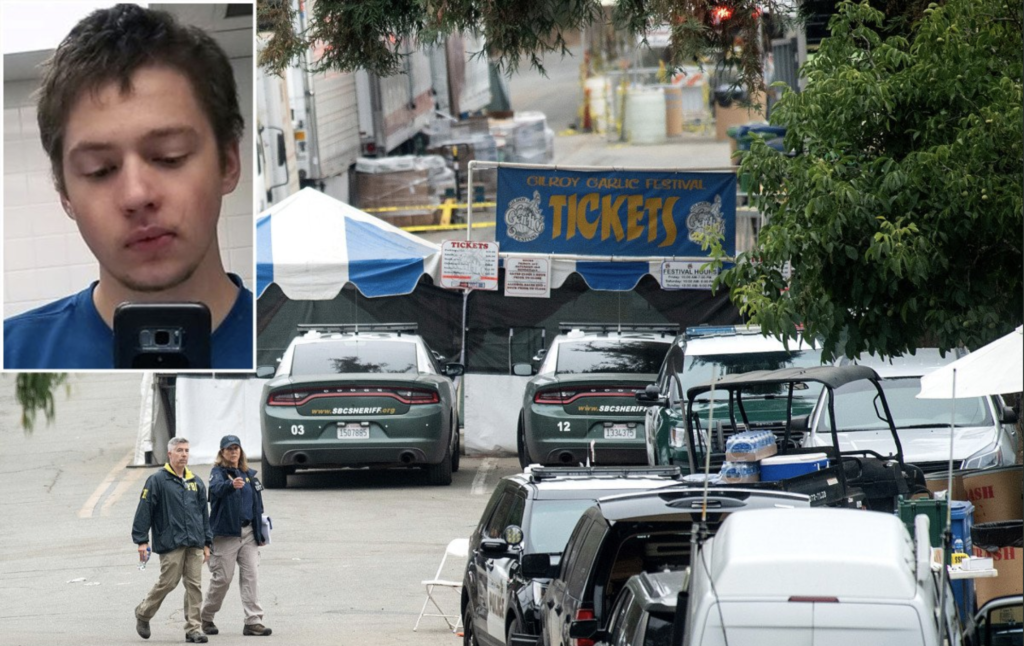 A 19-year-old California man was identified by police on Monday as the gunman who opened fire with an assault rifle at a garlic festival in Gilroy, California, killing three people and wounding a dozen others.

Santino William Legan, 19, cut through a fence at the festival on Sunday evening and shot people, seemingly at random, with an “AK-47-style” assault rifle, Gilroy Police Chief Scot Smithee told reporters. Legan was fatally shot within about a minute by police.

“It could have gone so much worse so fast,” Smithee said, noting that the popular festival, which takes place about 30 miles (48 km) southeast of Silicon Valley, is attended by thousands of visitors.

Police and FBI agents were still trying to determine a motive for the shooting and investigating unconfirmed reports by eyewitnesses that Legan may have had an accomplice.

Smithee said that search warrants had been obtained for a home in Gilroy associated with the suspect and a car that police believe he drove to the festival.

Legan killed a 6-year-old boy, a 13-year-old girl and a man in his 20s, Smithee said. Police believe Legan, who was originally from Gilroy, purchased the rifle legally on July 9 in Nevada, where he had been recently living.

At least 12 people were injured, but it was unclear how many of them were struck by gunfire. Seven of the victims ranged in age between 12 and 69 years old. One person remains in critical condition. Police had initially said that 15 people were injured.

President Donald Trump described the gunman as a “wicked murderer” during an event at the White House and asked Americans to pray for the victims.

“We grieve for their families, and we ask that God will comfort them with his overflowing mercy and grace,” Trump said.

The gunman was believed to have cut through a fence in order to evade metal detectors and other security measures at the front entrance, police said.

“Ayyy garlic festival time,” he wrote beneath a picture of people walking through the festival grounds. “Come get wasted on overpriced shit.”

Another photograph posted on Sunday showed a sign warning of a high danger of forest fires. Its caption urged people to read “Might is Right,” a racist and sexist treatise written in the 19th century.

“Why overcrowd towns and pave more open space to make room for hordes of mestizos and Silicon Valley white twats?” the caption said, referring to people of mixed race. The account was only a few days old, and was deactivated on Monday.

Police said they had determined that a 20-year-old man who posted on social media on Monday that he had “just shot up the G-festival” was not involved in the incident and was just seeking attention.

Footage uploaded to social media showed festival attendees scattering in fear and confusion as loud popping sounds could be heard in the background.

Police declined to name the shooting victims on Monday but the Santa Clara County Medical Examiner-Coroner identified the two youngest as Stephen Romero, 6, and Keyla Salazar, 13, of San Jose.

The boy’s grandmother, Maribel Romero, described Stephen as a “loving boy” who was “always kind, happy and … playful.”

His mother and his other grandmother were also shot and were being treated in a hospital, Maribel Romero told local media.

A vigil was scheduled in Gilroy for the victims on Monday evening.

Founded in 1979, the Gilroy Garlic Festival is an annual event run by volunteers and held outdoors at Christmas Hill Park. The agricultural community bills itself as the “Garlic Capital of the World.”

Weapons of any kind are prohibited, according to the event’s website, which also said anyone wearing clothing or paraphernalia indicating membership in a gang, including a motorcycle club, would be refused entry.