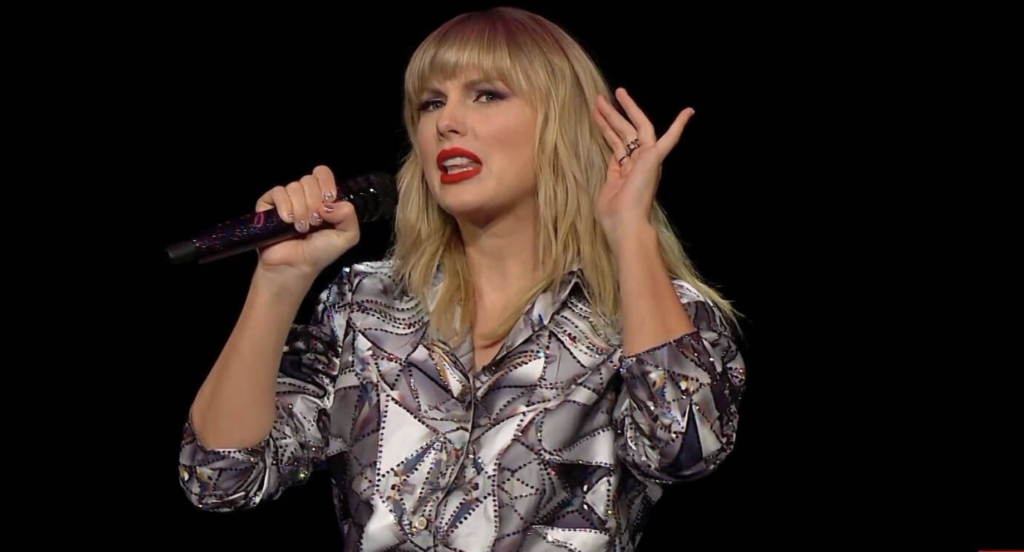 Taylor Swift is once again speaking out against Big Machine Label Group founder Scott Borchetta and Scooter Braun, alleging that they both are refusing to allow her to perform her catalog of songs when she appears at the American Music Awards to receive the Artist of the Decade Award on Nov. 24.

Taking to Twitter on Thursday to explain “what’s been going on,” Swift writes that she originally planned to perform a medley of her hits onstage, but Borchetta and Braun “claim that would be re-recording my music before I’m allowed to next year.”

The singer-songwriter also reveals that Netflix is currently creating a documentary about her life — news of the documentary had not been announced yet —  but Borchetta and Braun have also declined the use of her older music and performance footage for the project. “There is no mention of either of them or Big Machine Records anywhere in the film,” she notes.

Swift then shared that Borchetta informed her team that she can use her music only if she agrees to their conditions which include her to “not re-record copycat versions” of her songs next year and to “stop talking about him and Scooter Braun.”

In a statement on Friday morning, Big Machine said it was “shocked” to see Swift’s social media posts “based on false information.”

“At no point did we say Taylor could not perform on the AMAs or block her Netflix special,” the statement continues. “In fact, we do not have the right to keep her from performing live anywhere. Since Taylor’s decision to leave Big Machine last fall, we have continued to honor all of her requests to license her catalog to third parties as she promotes her current record in which we do not financially participate.”

Big Machine claims Swift contractually owes “millions of dollars and multiple assets” to their company and says it has been talking with her team about how to move forward, arguing that Swift’s social media posts, which quickly sparked an outpouring of support from her fanbase, has greatly affected “the safety of our employees and their families.”

“Taylor, the narrative you have created does not exist,” Big Machine’s statement continues. “All we ask is to have a direct and honest conversation. When that happens, you will see there is nothing but respect, kindness and support waiting for you on the other side. To date, not one of the invitations to speak with us and work through this has been accepted. Rumors fester in the absence of communication. Let’s not have that continue here. We share the collective goal of giving your fans the entertainment they both want and deserve.”

Following the news that Braun’s Ithaca Holdings had acquired Big Machine Label Group earlier this year — and with it the entire catalog Swift released through Borchetta’s label — the singer-songwriter took to Tumblr to share why she was upset with the deal and directly addressed Braun and Borchetta. Swift referred to the deal as her “worst case scenario” and notes that she learned of the deal “as it was announced to the world,” and that the news immediately brought her back to “the incessant, manipulative bullying I’ve received at [Braun’s] hands for years.”

Borchetta responded to Swift’s fighting words in his own post, titled “So, it’s time for some truth…,” in which he wrote that her father, Scott Swift, is a shareholder in Big Machine and was notified of a call with shareholders taking place June 25, saying that all shareholders were notified of the pending deal with Ithaca. Borchetta also argued that Swift and her attorney Don Passman went over the document in great detail and talked through the deal together, where he alleges she rejected the deal in favor of moving her business to Universal Music Group.

“Scott Borchetta never gave Taylor Swift an opportunity to purchase her masters, or the label, outright with a check in the way he is now apparently doing for others,” Passman told The Hollywood Reporter about that aspect of the dispute. Swift’s rep also denied Borchetta’s claim, telling People the singer learned of the news when she woke up to news articles.

Determined to own her music, Swift revealed that she would in fact rerecord her back catalog of songs in an interview with Tracy Smith on CBS Sunday Morning.

“I feel very strongly that sharing what is happening to me could change the awareness level for other artists and potentially help them avoid a similar fate,” Swift writes. “The message being sent to me is very clear. Basically, be a good little girl and shut up. Or you’ll be punished.”

Swift calls her new quarrel and continuing battle with Borchetta and Braun “wrong,” as she reiterates that neither Borchetta or Braun had any role in writing her songs nor helped in creating the relationship she shares with her fans.

To rectify the situation, Swift pleads that her fans share their thoughts and feelings to Borchetta and Braun: “Scooter also manages several artists who I believe care about other artists and their work. Please ask them for help with this — I’m hoping that maybe they can talk some sense into the men who are exercising tyrannical control over someone who just wants to play the music she wrote.” Among the artists Braun manages are Justin Bieber, Ariana Grande and Demi Lovato.

Apart from her fans and the public, Swift also asked for assistance from The Carlyle Group, who she says “put up money for the sale of my music to these two men.”

“I just want to be able to perform MY OWN music,” she explains. “That’s it. I’ve tried to work this out privately through my team but have not been able to resolve anything.”

Due to the circumstances, Swift admits that her performance at the American Music Awards, the Netflix documentary and other performances she plans to have up to November 2020 “are a question mark.” “I love you guys and I thought you should know what’s been going on.”