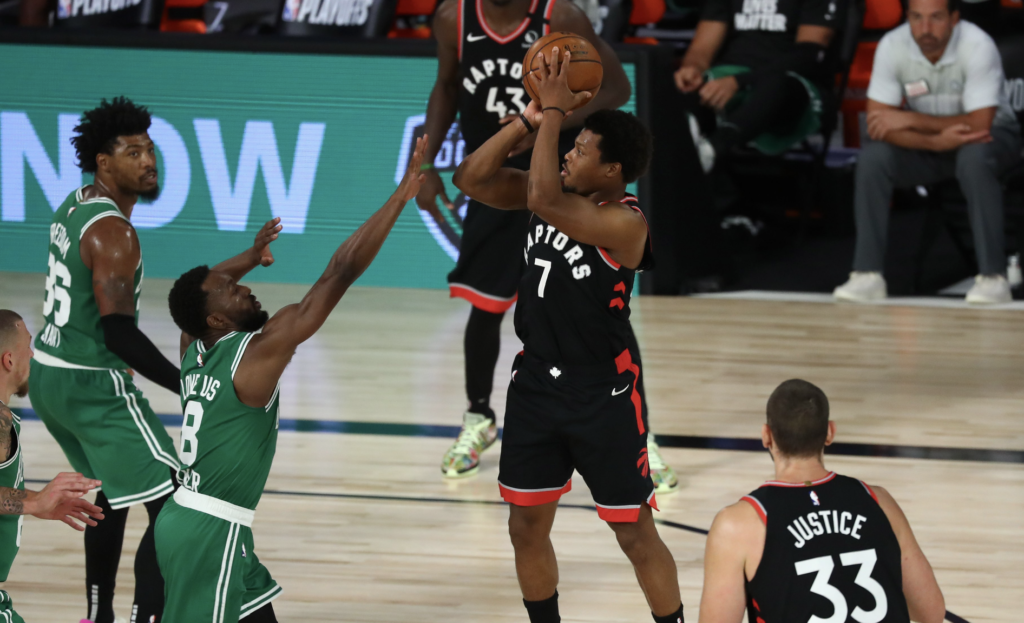 Best Game of The NBA Season

The Toronto Raptors have been outscored by 32 points through six games of the Eastern Conference semifinals. But point differential don’t mean a thing, and there will be a Game 7 on Friday (9 ET, TNT) after the Raptors’ wild, 125-122, double-overtime victory over the Boston Celtics in Game 6.

With their season and title defense on the line, the Raptors made just enough plays across 58 minutes of hectic hoops to stay alive. The Celtics led by as many as 12 points in the second quarter, the Raps led by as many as eight in the third, and the gravity of this series brought them back together for the final 19 minutes, during which neither team led by more than four.

Marcus Smart had a triple-double. Toronto started the game in a box-and-1 defense, with Fred VanVleet chasing Kemba Walker. Kyle Lowry got three stitches for a shot to the chin that he didn’t get a call on despite his typical embellishment. The Raptors scored more points on a three-possession sequence of the third quarter (12) than they did in the entire first quarter of Game 5 (11). And though it felt like a slog at times, this was the most efficient game of the series, because the 3s were falling. In fact, both teams shot exactly 19-for-47 from beyond the arc.

There have been 14 instances this season where a team made at least 10 corner 3-pointers in a game, and three of the 14 have been the Celtics against the Raptors in Orlando: Their Aug. 7 meeting (10), Game 1 (10), and Game 6 (11). There have also been 14 instances (11 in the regular season and three in the playoffs) where a team won a game in which its opponent scored more efficiently. Two of those 14 have been Toronto wins in this series (Games 3 and 6).

While the Celtics were slightly more efficient on Wednesday, the Raptors had a few extra possessions. And nearly as important as any stop or bucket in Game 6 were the three overtime jump balls that OG Anunoby won (two over Daniel Theis, one over Brown) as the 6-foot-7 “center” in the small-ball lineup that Toronto used over the final 18:22. The Celtics played their starting lineup for all of the fourth quarter and both overtimes, and nine players in the game logged more than 47 minutes.

Marc Gasol had another rough first half, but helped open the floodgates by starting the third quarter with his first 3-pointer (on his 12th attempt) of the series. Pascal Siakam continued to struggle offensively, but hit a huge face-up jumper to tie the game with less than two minutes to go in the second overtime.

Walker should probably have got a foul call on drive at the end of regulation. The Raptors should probably have had more time on the clock after Jayson Tatum fouled Anunoby on the ensuing inbounds play. Though it was the most efficient game of the series, the teams combined to go scoreless on the final seven possessions of regulation and also on five of the six final possessions of the first overtime, with the final play drawn up for a Norman Powell iso.

And then, after 53 minutes of grind-it-out basketball, it seemed like neither team could miss.

If there was one thing that made sense, it was how the Raptors got their stops in those final five minutes. Before Smart missed a last-second, off-balance 3-pointer for the tie off a full-court pass from Tatum, the Raptors got four stops in the second overtime, and all four came via their hands.

Brad Stevens said before Game 6 that he deletes e-mails that include defensive metrics. And he probably didn’t need any e-mails to tell him that Toronto was near the top of the league (ranking second) in both steals and deflections per game. Stevens noted early in the series that the Raptors’ arms would swipe at the ball “every time you drive it.” And those arms certainly weren’t going to stop swiping with the season on the line.

A minute and 15 seconds into the second OT, the Celtics were up four and Brown had the ball in the open floor, dribbling up the right side. With only the 6-1 Fred VanVleet in front of him, Brown attacked.

“I know he likes to go right, so I think I’ve cut his right off a little bit,” VanVleet said afterward. “He went left and tried to put his body on me.”

In the middle of the paint, Brown tried to jump off his left foot for a runner over VanVleet, whose “bet on yourself” mantra does not extend to trying to block shots up at the rim.

“I’m not really going to do nothing in the air with him,” VanVleet, sixth in the league with 4.2 deflections per 36 minutes, said. “I can’t get to the height that he can get to, but if he brings the basketball down, I’m able to get my hands on it.”

As Brown rose, VanVleet came down with his right arm, knocking the the ball out of Brown’s hands, a short-guy blocked shot. He followed it up with a short-guy rebound, almost in the same motion. A few seconds later, Lowry drove past Brown for a tough bucket in the paint to cap one of this game’s many momentum-shifting sequences.

On the next possession, Theis rebounded a Tatum airball under the basket. He was in position for a layup, but the ball was below his waist and Powell got his hands on it. The play was initially called a foul, but Raptors coach Nick Nurse challenged the call, and it was reversed. Anunoby then won his third jump ball of the final 10 minutes.

The Celtics were still up two the next time down the floor when Brown backed Lowry down to the right block. As Brown turned into the lane for a short jumper, Lowry, 51st in the league with 3.0 deflections per 36, slapped down on the ball. It was another short-guy blocked shot and, like VanVleet two possessions earlier, Lowry recovered it himself.

The teams traded scores for the next seven possessions, with Anunoby putting the Raptors ahead with a catch-and-shoot 3 with less than a minute to go. The Celtics then got the Raptors in rotation and Tatum drove past a Lowry close-out. But Powell, 45th in the league with 3.1 deflections per 36, came out of nowhere to cut him off. When Tatum tried to cross over, Powell got his hands on the dribble.

The ball bounced off of Lowry’s leg and right back into the hands of Powell, who drove the length of the floor, drew contact from Smart, and put in a near-impossible layup. His free throw put the Raptors up four.

Over their first 11 possessions of the second overtime, the Celtics missed just one shot that came out of their hands cleanly. That was Tatum’s step-back 3 that Siakam contested and Theis rebounded. They made their other seven “clean” shots, but had three misses that the Raptors got their hands on and the Tatum turnover that lead to Powell’s 3-point play.

This is what the Raptors do. Their aggressiveness toward the ball has, at times, been their downfall in this series, because Tatum and Walker have been willing to find the open man. Just watch the film from all those corner 3s the Celtics made on Wednesday.

But the champs ranked second defensively this season, because that aggressiveness worked in their favor more often than not. It’s most important to stay in front of the guy you’re guarding, but Nurse isn’t going to tell his guys not to use their hands if the ball is there for the taking.

“Sometimes when you’re smaller,” Nurse said, “they’ve got these guys that are trying to post you up and shoot over top of you. And once they turn around it’s kinda your last line of defense, because if they get it up, they’re going to be over the top of you.”

He laughed and finished, “Just trying to survive sometimes out there, too.”

They survived. Game 7 is Friday.