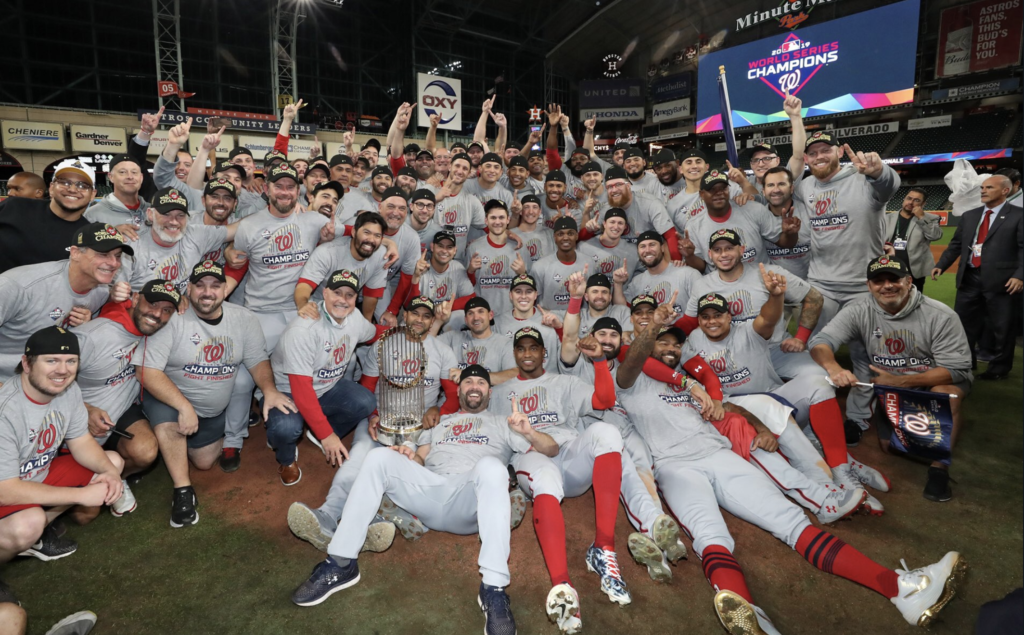 Champions of The Baseball World!

In some ways, this World Series championship serves as an “I told you so” for the Washington Nationals and their general manager, Mike Rizzo.

For the choices to hire, then stick by, manager Dave Martinez, especially in the face of a 19-31 record, the worst 50-game start to a season in baseball history for an eventual title winner.

For making midseason pickups of veterans discarded by other teams, such as Gerardo “Baby Shark” Parra, and assembling, in this “Let the Kids Play” era, a group of “Viejos” such as playoff star Howie Kendrick, to form the oldest roster in the majors.

For caring about chemistry as much as what’s quantifiable.

For the much-debated decision to shut down Stephen Strasburg all those years ago, a move meant to protect the surgically repaired right elbow that just made Strasburg a World Series MVP and the first pitcher to end a postseason with a 5-0 record.

For the philosophy of valuing old-fashioned starting pitching above all else: Each of Washington’s four wins in the Fall Classic came after sending to the mound Strasburg or Max Scherzer, whose “back from the dead” — in teammate Adam Eaton’s phrasing — return from a nerve problem near his neck got things going in a 6-2 victory in Game 7 at Houston on Wednesday night.

“Mike’s a baseball guy. He always has been,” first baseman Ryan Zimmerman said. “He leans on his scouts, on his guys that go watch games. He’s evolved, just like everyone else has, with the analytics and all the data that’s available. That information is useful. I don’t think you have to be one way or the other. I think you can kind of blend it together. And I think he does a really good job of that.

Now as the offseason officially begins, Rizzo must get back to work.

Strasburg could opt out of his contract. Anthony Rendon, who homered in the last two games of the Series, can become a free agent. The bullpen, so bad for so long in the regular season but just fine as a condensed unit in the postseason, must be rebuilt.

Zimmerman, the 35-year-old “face of the franchise,” has been around for all 15 of the Nationals’ seasons, but might not get a 16th.

He was there for the pair of 100-loss seasons that led to a pair of No. 1 overall picks, one of which turned into Strasburg. (The other? A certain now-gone outfielder by the name of Bryce Harper.) And now he’s seen the Nationals deliver Washington’s first World Series trophy since the Senators won 95 years ago.

A parade along Constitution Avenue is planned for Saturday.

“The organization deserves credit for the way they put this team together. It’s a bunch of old guys in here that they trusted. There’s not a lot of teams that were willing to put together a roster like ours,” reliever Sean Doolittle said. “There’s a bunch of guys over 30 years old and, according to the smartest people in the room, you can’t win games like that anymore. You need young, athletic, controllable talent. We’re really proud that we’re the oldest team in baseball and we just won the World Series.”

Whether it was that terrible beginning to the season or deficit after deficit in must-win games — from the NL wild-card victory over the Milwaukee Brewers to the 4-for-4 success on the road against 107-win Houston — Washington heeded their skipper’s orders to “stay in the fight.”

No team ever had won more than three elimination games after trailing in each during a single postseason. The 2019 Nationals, built by Rizzo and powered by an everyone-chips-in ethos, did it five times.

“It’s almost like we’ve done it so many times that we have to get punched in the face to kind of wake up,” Strasburg said. “We don’t quit. We never quit throughout the season, despite kind of everybody saying that we were done.”