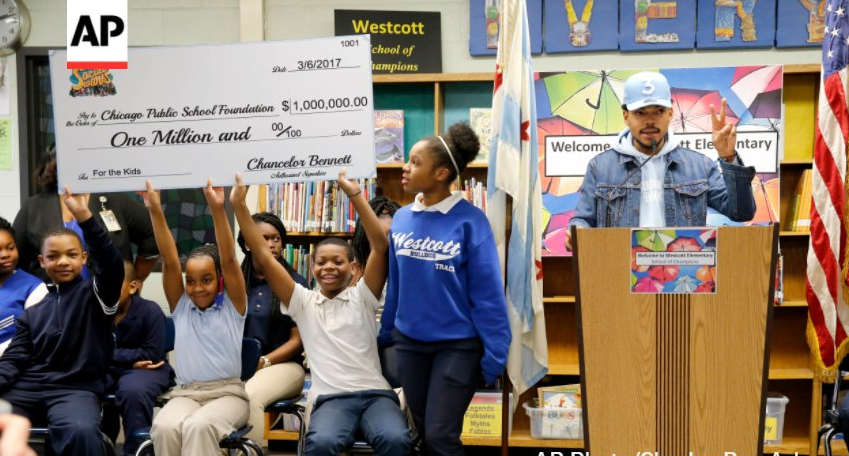 Chance The Rapper is Gonna Save Chicago By His Damn Self

Chance the Rapper’s made an intervention into Chicago Public Schools’ funding crisis when the Grammy-winner presented a $1 million check to city schools and urged Gov. Bruce Rauner to use his executive powers to help the nation’s third-largest district.

The Republican governor, a former venture capitalist, responded by noting his own philanthropy and floating Chicago school funding ideas that would face tough odds in the Democratic-controlled Legislature. Illinois has gone two years without a budget, the longest such stalemate of any state in nearly a century.

The back-and-forth came after a meeting Friday between Rauner and the artist – whose real name is Chancelor Bennett – that left the rapper visibly agitated. Chance asked for the meeting after he won three Grammys last month, including best new artist, and Rauner tweeted congratulations.

The Chicago native stopped at an elementary school near where he grew up to announce the donation to a schools’ foundation, calling himself a “public school kid.” He also accused Rauner of failing to present solutions without “caveats or ultimatums.”

At the heart of rapper’s beef with Rauner is $215 million in teacher pension relief for Chicago schools that he vetoed last year. Rauner said a broader pension overhaul was needed, part of his push for pro-business and long-term reforms. However, the school district of roughly 400,000 students had factored the money into its roughly $5.4 billion budget and had to make mid-year cuts. The district has also proposed ending the school year early to save money.

Rauner, who called the meeting a “good exchange of views,” circulated plans before Chance’s public appearance for ways to recover the $215 million; both require state legislation. One option calls for using up most of Chicago’s special taxing district funds, set aside for capital projects, for a one-time infusion. The other would attach the funding to broader pension reform.

Chicago officials rejected both, saying Illinois’ school funding formula is fundamentally unfair to the largely minority and poor school district. CPS has sued the state over the calculation and argues the district is further penalized since it’s the only one in Illinois where local taxpayers, not the state, help pay teacher pension costs.

Chance also dismissed the plans, saying he wasn’t a politician.

“It’s not my job to propose any policy or be behind anything but the kids,” he said.

“While the Rauners are passionate donors to our schools, individual contributions will never be enough to address the financial challenges facing CPS,” the statement said. “It would be helpful if CPS officials came to Springfield and joined in serious good faith discussions about the long-term stability of all of our schools.”

Rauner has blamed Chicago’s fiscal woes on years of financial mismanagement and argues that Chicago receives hundreds of millions in block grants other schools don’t.

Meanwhile, Chance deemed his donation – from the concert ticket proceeds – a “call to action” and asked other artists and corporations to follow suit.