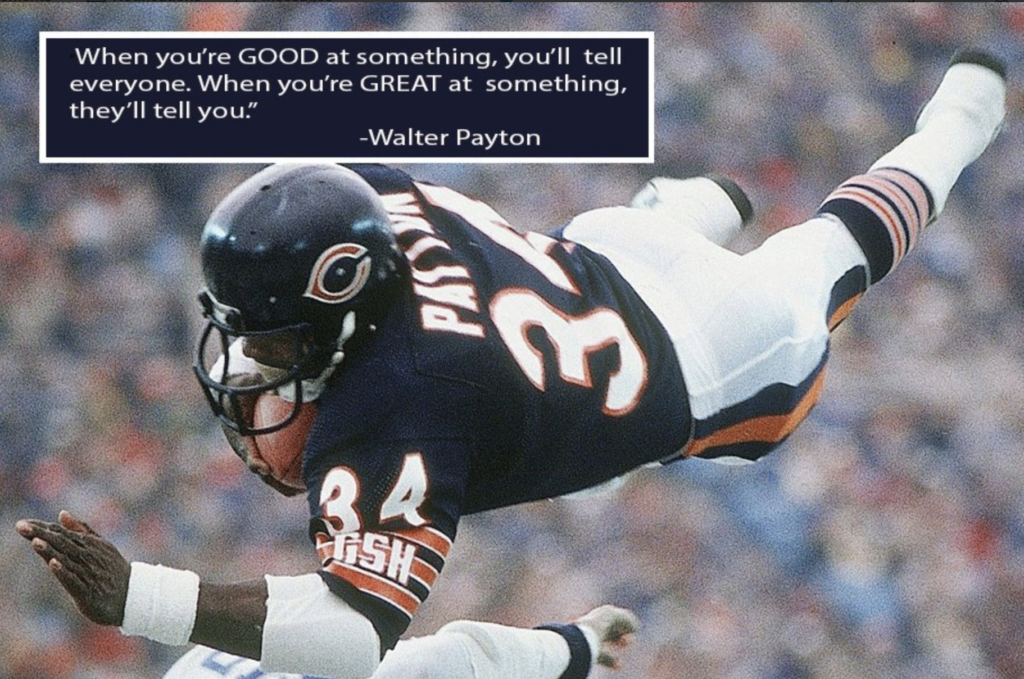 The list of the top 25 players in Bears history features a litany of Hall of Famers, including some who are considered among the best to ever play their respective positions in the NFL.

Ranked No. 1 is legendary running back Walter Payton. “Sweetness” spent his entire 13-year NFL career with the Bears from 1975-87, missing just one game and retiring as the league’s all-time leading rusher with 16,726 yards. He was inducted into the Hall of Fame in 1993 in his first year of eligibility.

Payton was voted to nine Pro Bowls, set 27 Bears records and had his No. 34 retired. He also threw eight touchdown passes and led the NFL in kickoff returns as a rookie in 1975 with a 31.7-yard average. In 1999, the NFL renamed its Man of the Year award after Payton as a tribute to his greatness both on and off the field. The Bears legend passed away on Nov. 1, 1999 at the age of 45 due to bile duct cancer.

Ranked No. 2 on the list is superstar middle linebacker Dick Butkus, who many consider the most ferocious defensive player in NFL history. The Chicago native was an intimidating and relentless force who possessed talent, aggression and hostility.

Butkus was voted to the Pro Bowl in each of his first eight NFL seasons. He was also selected as an All Pro in seven of his nine years with the Bears. Inducted into the Hall of Fame in 1979 in his first year of eligibility, the Illinois product set an NFL record that has since been broken with 25 career fumble recoveries.

Running back Bronko Nagurski is ranked as the third best player in Bears history. A bruising ballcarrier who was also a threat to pass, Nagurski helped lead the Bears to three NFL championships in eight seasons. He was a four-time first-team All-Pro selection and was named to the NFL All-Decade Team for the 1930s.

Star quarterback Sid Luckman is No. 4 on the list. Luckman not only led the Bears to four NFL titles during 12 seasons with the team from 1939-50, but he played a key role in revolutionizing pro football by helping to introduce the “T” formation.

Luckman was voted All-NFL five times, led the NFL in touchdown passes three times and was named league MVP in 1943. He was selected to the NFL’s All-Decade Team for the 1940s and threw a league-record seven TD passes in a 1943 win over the Giants.

Running back Gale Sayers is fifth on the list. The “Kansas Comet” set 23 Bears records and seven NFL marks during his career and was the youngest player ever inducted into the Hall of Fame at age 34 in 1977. In winning the NFL Rookie of the Year Award in 1965, Sayers set a league record with 22 touchdowns and tied another mark by scoring six TDs in an unforgettable performance against the 49ers.

Tight end Mike Ditka is ranked No. 6. Before he became “Da Coach” in the 1980s, Ditka was one of the NFL’s greatest tight ends. Ditka was voted to five Pro Bowls in six seasons with the Bears from 1961-66, catching 316 passes for 4,503 yards and 34 touchdowns. He remains the Bears’ all-time leader in all three of those categories among tight ends and was the first tight end inducted into the Hall of Fame in1988.

The rest of the top 10 is rounded out by middle linebacker Bill George at No. 7, center/linebacker Bulldog Turner at No. 8, defensive end Doug Atkins at No. 9 and guard Danny Fortmann at No. 10.

Check out the full list of the top 100 players in Bears history as ranked in the Chicago Bears Centennial Scrapbook.