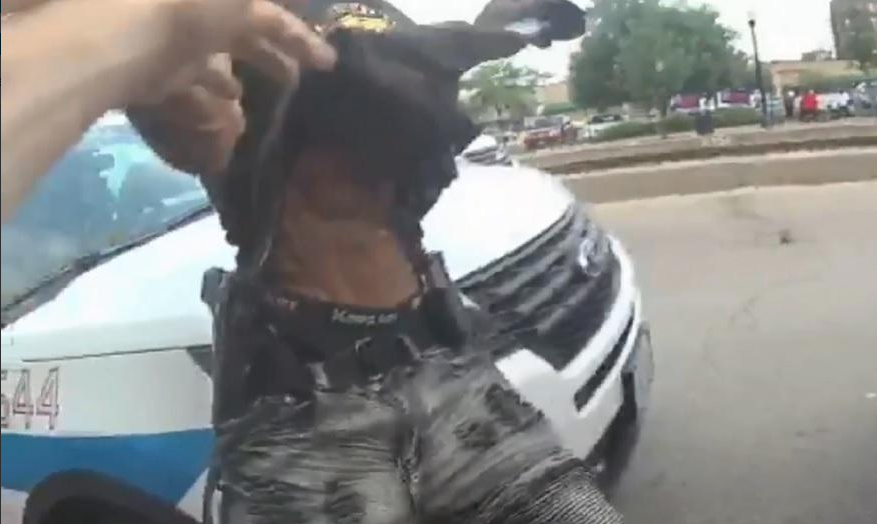 Video of confrontation between police and Mr. Augustus at 71st and Jeffery. pic.twitter.com/Qd9q9IXNdS

Police in the nation’s third-largest city released video Sunday that showed a man who was shot to death by an officer a day earlier had a firearm and tussled with officers before the shooting.

Chicago Police Superintendent Eddie Johnson decided to quickly disseminate the body camera video in the face of angry protests after the shooting. Dozens of protesters took the streets Saturday, with some demonstrators blasting the police “murderers” and a few slinging bottles and rocks at the officers.

The suspect was identified by authorities as Harith Augustus, 37, a barber in the city’s South Shore neighborhood who was shot by police early Saturday evening not far from where he worked.

Johnson said that department officials met with the Augustus’s family Sunday and showed them the video before making it public.

“The family wants to ensure there is a just investigation, but they also want to make sure this city doesn’t overreact,” Johnson said.

Johnson said Augustus had a valid firearms license but did not have a concealed-carry permit.

The decision to make video public less than 24 hours after the incident was a notable departure from police department policy of officer-involved shootings. The department for years has faced scrutiny for disproportionately using deadly force in black and Latino neighborhoods. In 2016, the city adopted a policy to release video and audio recordings within 60 days of a use-of-force incident.

Johnson said he released the video to dispel inaccurate information circulating on the street that he said sparked the violent protests.

“We can’t have another night like that,” Johnson said. “If we don’t get in front of things, the narrative will spin out of control.”

Police did not release the name of the officer who fired the weapon but described the person as a “probationary officer” who had completed the police academy and was with the department less than two years.

Protests continued Sunday evening. A few dozen demonstrators who gathered near the scene of the shooting were unmoved by the police video.

As police officers stood nearby watching the crowd, activist William Calloway slammed the police department as a dangerous element terrorizing the city’s poor and predominantly black and Latino enclaves like the South Shore neighborhood where Augustus was shot.

“Chicago police is the biggest gang in Chicago,” Calloway said.

“The loss of this young father’s life is a tragedy. No amount of inquiry or pursuit of justice will bring the little girl’s daddy back,” Jackson said. “My heart is broken for the child and her family. My soul is sick for the city.”

The Civilian Office of Police Accountability, which investigates officer-involved shootings, said it was analyzing the video.

Police said in a statement that officers on foot tried to question a man “exhibiting characteristics of an armed person” – in this case a bulge in the man’s waistband they suspected was a weapon. The man pushed the officers away and was shot when he appeared to reach for his weapon as he fled, Waller said.

Jackson demanded a thorough and transparent investigation. He said trust has been destroyed in minority communities by “bullies with badges” in Chicago and across the nation.

“I’m not talking about all police officers. Most officers do their jobs – and risk their lives –  every day to protect the public to the best of their abilities,” he said.

But he said that too often good officers allow bad ones to “poison the barrel” by looking the other way and staying silent when they see other officers brutalizing members of the public.