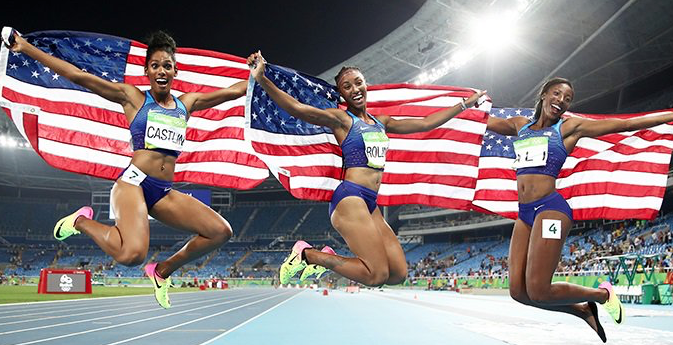 The sweep by the U.S. women marked a significant first in Olympic history.

Wednesday night thus made for the first medals sweep for American track and field women.

“What? Oh, my goodness!” Ali said when told of the historical significance.

To be sure, American women have gone 1-2-3 at previous editions of the Games — as far back as 1904 (again), in archery, and in other disciplines.

But, remarkably, never before had the American women gone gold, silver, bronze in track or field.

Making it all the sweeter, as Rollins would say: “We are genuinely friends.”

The victory also made for the first gold medal for the 2016 U.S. team on the track. The prior four came in field events: Michelle Carter, women’s shot put, Jeff Henderson, men’s long jump; Christian Taylor, men’s triple jump; and just before the hurdles, Tianna Bartoletta in the women’s long jump.