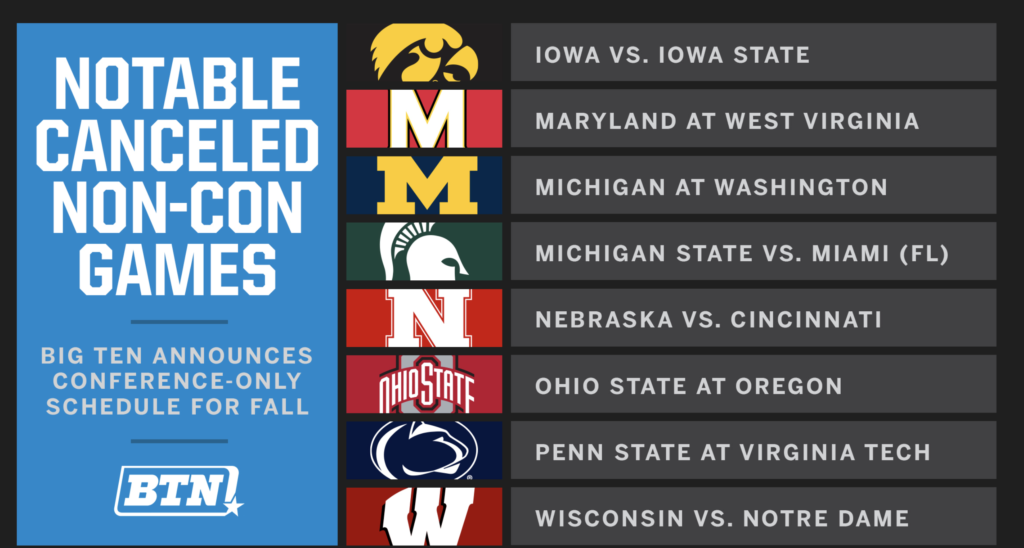 College Football is in Trouble

The Big Ten on Thursday announced it will go to a conference-only season for all fall sports, including football, amid “unprecedented times” during the coronavirus pandemic.

“We are facing uncertain and unprecedented times, and the health, safety and wellness of our student-athletes, coaches, game officials and others associated with our sports programs and campuses remain our number one priority,” the Big Ten said in a statement.

“… By limiting competition to other Big Ten institutions, the Conference will have the greatest flexibility to adjust its own operations throughout the season and make quick decisions in real-time based on the most current evolving medical advice and the fluid nature of the pandemic.”

The Big Ten is the first of the Power 5 conferences to make this type of a major change to its fall sports. The SEC on Thursday said it continues to meet with campus leaders “to determine the best path forward” for fall sports, and Big 12 commissioner Bob Bowlsby said in a statement that he has been advised to “move ahead slowly” and plan “for all available scenarios.” Meanwhile, the ACC has already said it would delay all fall sports until at least Sept. 1.

SEC league officials and athletic directors are scheduled to meet Monday but don’t expect to make any decisions on the fall schedule until the end of July, sources confirmed to ESPN. SI.com was first to report the meeting.

“We will talk concepts, just like we have since the beginning, and those concepts have to be more serious given the shifting landscape,” an SEC AD told ESPN. “But everything remains fluid, and no one believes right now that we have to [shorten the season to just league games] like the Big Ten did.”

The Ivy League on Wednesday ruled out playing all sports this fall.

If college football can be played this fall, Big Ten presidents and athletic directors preferred the conference-only model, which will eliminate some long-distance travel and help ensure that teams are being tested for the coronavirus universally, multiple sources inside the league and around college football told ESPN.

The new conference-only schedules for all fall sports will be released at a later date, the Big Ten said. The conference also said it would continue to evaluate other sports.

“I’m hopeful that’s where we end up next week in locking that down,” Smith said Thursday. “We’ve talked about that, and that’s our preference.”

Smith said if they’re able to play in September but something happens later in the month or in October, “we can hit the pause button and provide a window of opportunity for our student-athletes not to be put at risk.

“We can move games,” Smith said. “… There’s a flexibility — I can’t say that enough. That’s significant.”

Big Ten presidents and ADs discussed the issues during a conference call earlier this week, and the league’s head coaches were given an opportunity to weigh in on Thursday morning.

Big Ten commissioner Kevin Warren on Friday told ESPN that “we’re also not prepared to play should the circumstances so dictate” and that the conference will continue to follow the advice of medical experts.

“If you have any issues you’re dealing with in a family, if it’s contained in a family, you have a better chance to be able to make better decisions and have flexibility,” Warren told ESPN. “That goes for a multiplicity of items, travel and scheduling. No one has ever done this. We honestly don’t know what’s going to happen. We don’t know.

“If we return to play, then if we have to miss a week or two weeks, that gives us more flexibility from a conference-only schedule than it does if we had things that required us to play at different locations across the country. Or, have athletic events that require other teams to travel to us. It may not be us; it may be them. What happens if we have a game on a schedule with a school and, all of a sudden, a school or their state says, ‘You’re on a stay-at home-order.’ It’s just to give us the best chance to be able to compete in the fall. Is this a 100% guarantee? Absolutely not.”

Smith shares that concern about a fall season taking place.

“I’m really concerned. … I’m very concerned,” Smith said. “In our last conversation, whenever that was, I was cautiously optimistic. I’m not even there now, when you look at the behavior of our country and you consider that in May we were on a downward trajectory with our [coronavirus] cases. … Now we’re, if not the worst in the world, one of the worst in the world.

“I am concerned that we may not be able to play. Which is why we took the measure we took — in order to try and have September available to us for conference games and give us the flexibility and control to handle disruptions if we’re able to start a season. I’m concerned about where we are, just across the board, relative to the management of the pandemic as individuals.”

The conference also said it was working with the Big Ten Task Force for Emerging Infectious Diseases and the Big Ten Sports Medicine Committee to finalize protocols for the upcoming fall seasons.

“I’m going to rely upon medical experts,” Warren told ESPN. “It’s the best thing I can do in this leadership position is constantly rely on the medical experts and listen to the data. I trust them implicitly. I trust our Emerging Infectious Disease Task Force. I trust our team doctors in our conference, our trainers. I trust what they have to say and understand.”

The Big Ten said all student-athletes choosing not to participate in sports during the 2020-21 academic year because of concerns about COVID-19 “will continue to have their scholarship honored by their institution and will remain in good standing with their team.”

Some Big Ten schools preferred playing only conference foes in football with one additional nonleague game — thus preserving some of the marquee non-Big Ten matchups — but there was overwhelming support for a 10-game conference-only schedule, the sources said.

An assistant coach at a Big Ten program told ESPN that his head coach instructed him to stop scouting and otherwise preparing for nonconference opponents and focus only on Big Ten foes.

“We understand that difficult decisions need to be made,” Moosbrugger said. “… If we are to solve these challenges and be truly dedicated to protecting the health and safety of our student-athletes, we need to do a better job of working together.”

The marquee nonconference matchups lost to the Big Ten decision include Michigan‘s road game at Washington on Sept. 5, Ohio State‘s trip to Oregon on Sept. 12, Michigan State‘s home game against Miami on Sept. 26 and Wisconsin‘s contest against Notre Dame at Lambeau Field on Oct. 3.

Smith said more decisions regarding the specifics of the football schedule — how many games are played, if the schedule needs to be front-loaded with division games, and how a champion might be determined — are expected next week.