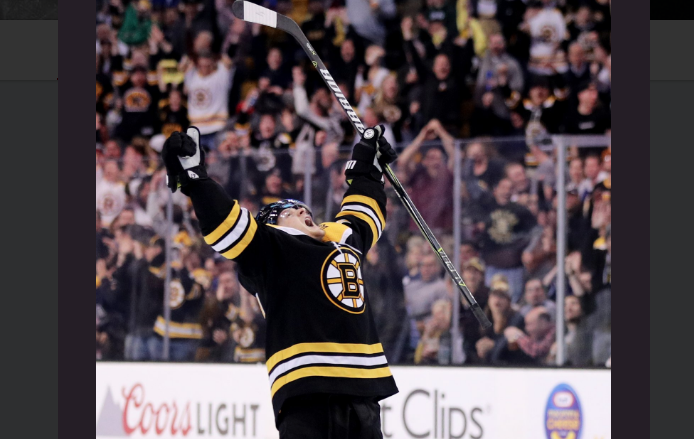 Come From Behind Win For Game 7

Jake DeBrusk scored his second goal of the game to break a third-period tie, and the Boston Bruins came from behind to beat the Toronto Maple Leafs in Game 7 — again — winning 7-4 on Wednesday night to advance to the Eastern Conference semifinals.

Kasperi Kapanen put Toronto ahead 4-3 with a short-handed goal in the second, but Boston scored four times in the third period to pull away. Torey Krug tied it, DeBrusk gave Boston the lead with 14:35 to play, David Pastrnak added a goal with 8:21 left to help clinch it, and Brad Marchand lofted one into the empty net with 51 seconds left to set off a celebration in the stands.

Tuukka Rask stopped just 20 of 24 shots for Boston, which will play the Tampa Bay Lightning in the second round starting Saturday.

Frederik Andersen had 29 saves for the Maple Leafs, who have not won a playoff series since 2004. They came close in the first round in 2013, when they rallied from a three-games-to-one deficit against Boston and took a 4-1 in Game 7, but the Bruins rallied to win it in overtime.

Danton Heinen scored his first NHL postseason goal, Patrice Bergeron had a goal and two assists, and David Krejci had three assists for the Bruins.

Patrick Marleau scored twice for the Maple Leafs, who won again won back-to-back games after falling behind 3-1 in the series. Game 6 came in Toronto on the night that a man drove a van onto a crowded sidewalk in the city, killing 10 people and injuring more than a dozen others.

The teams combined for five goals in the first period before Toronto scored twice in the second, taking a 4-3 lead when Kapanen beat Marchand to a loose puck and then held him off, skidding to a stop in front of Rask before poking the around his left skate.

In the third, the Bruins scored two 4-on-4 goals after matching penalties opened up the ice. Krug made it 4-4 on a slapper from the point just 1:10 in, and then DeBrusk scored the go-ahead goal when he outmuscled Jake Gardiner in the slot and put it between Andersen’s legs.

The Bruins forward slid into the boards behind the goal and didn’t even have a chance to get off his knees before he was mobbed by his teammates.

Notes: Bruins coach Bruce Cassidy, in his first full season on the Boston bench, was named a finalist for the Jack Adams Award as the NHL’s coach of the year. … Celtics Hall of Famer Tommy Heinsohn was the honorary fan banner captain, getting the crowd riled up before the game.