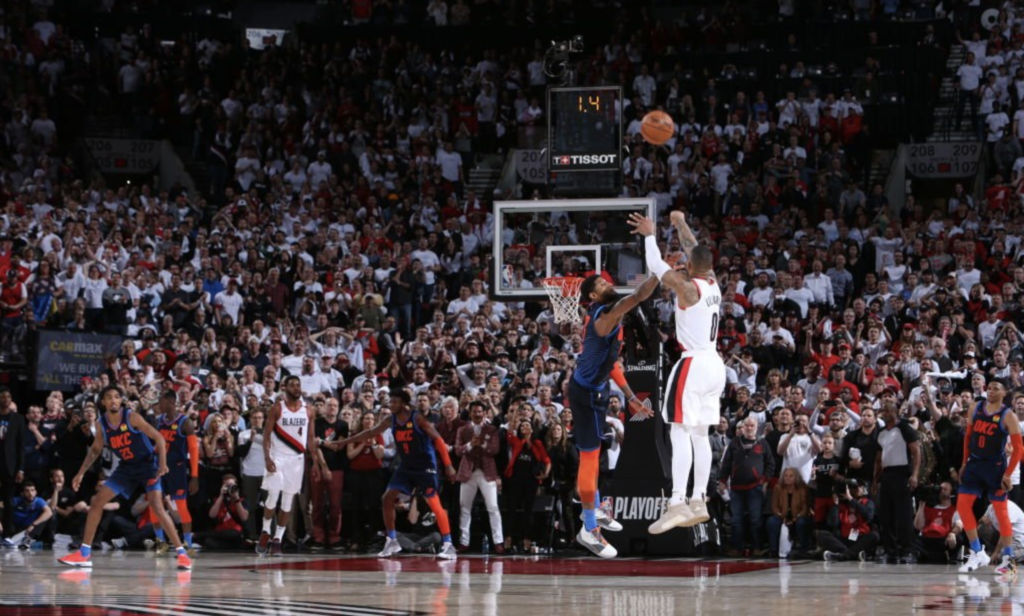 With the seconds ticking away in a tie game, his opponent’s best defender locked on him and a much-needed playoff series on the line, Damian Lillard had his moment of ascension.

The Blazers star dropped 50 points on Tuesday to power a 118-115 Game 5 victory over the Oklahoma City Thunder. He ended the game in the most Damian Lillard fashion, as the point guard stared down Paul George and sank a buzzer-beating 3-pointer from the logo to blow the roof off the Moda Center.

The win gave the Blazers a 4-1 series victory over the Thunder, their first series win in three seasons. They will face either the Denver Nuggets or San Antonio Spurs in the second round.

“Damian’s performance was probably the best performance I’ve seen in person,” Blazers coach Terry Stotts said after the game. “I’ve seen 50-point games obviously, but the way he carried the team in the first half with C.J. [McCollum] in foul trouble, the magnitude of the last shot to win a series. … He was special tonight.”

Despite Lillard’s scoring output, the Thunder actually managed to keep the game close, if not lead, for the first three quarters. As the fourth quarter began with Lillard on the bench, the Thunder opened up a 15-point cushion and looked on their way to forcing a Game 6 in Oklahoma City.

The Blazers rallied from there, as Mo Harkless and McCollum provided most of the scoring to tie the game again at 115-115 with 30 seconds left. The Thunder missed their chance to reclaim the lead when Russell Westbrook missed a layup, the final shot of an 11-for-31 shooting night for one of Lillard’s biggest rivals.

And then, Lillard’s shot went in.

“I was standing there looking at the rim and I was like ‘This is a comfortable range,’” Lillard said of a shot that was measured at an insane 37 feet.

Twitter caught fire, Blazers fans screamed in unison, Lillard’s teammates swarmed the hero of the moment and Lillard stared into the camera like it was just another day. The Thunder went home, faced with some tough questions this offseason after three straight first-round exits. The Blazers started preparing for what comes next.

“There’s been a lot of back and forth, a lot of talk and all this stuff, and that was the last word,” Lillard said once it was all over.