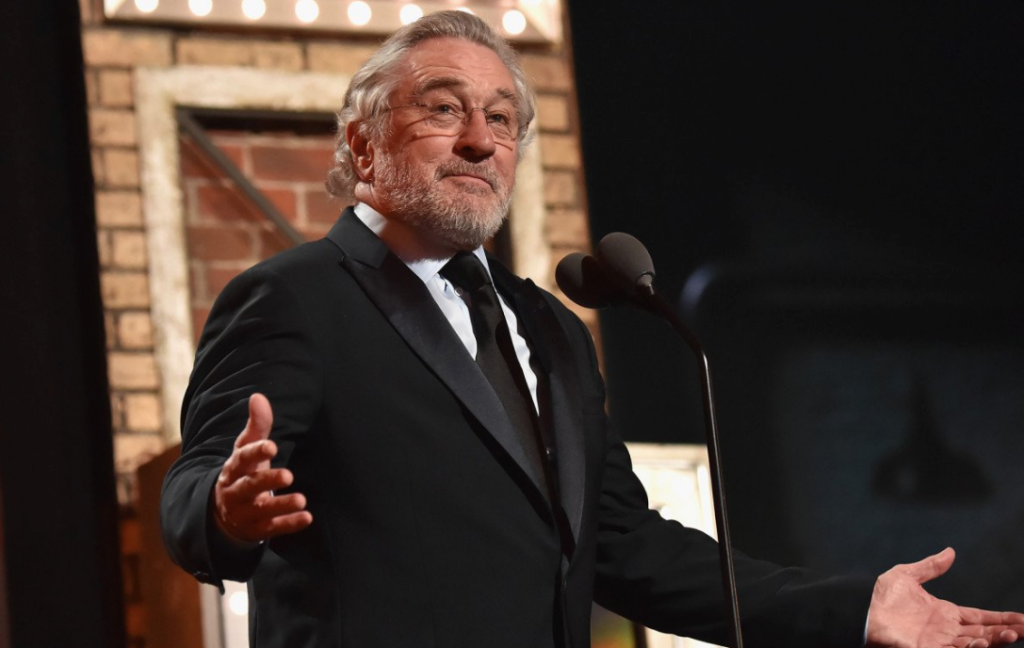 Awards shows rarely shy away from political comments, with winners often using their time onstage to address hot-button issues, and there was no exception at the 2018 Tony Awards on Sunday night.

Robert De Niro earned a standing ovation from the audience when he walked onstage toward the end of the Tonys and stated, “Fuck Trump,” which was bleeped out of the telecast. After thrusting his fists in the air and declaring “Fuck Trump” one more time, the actor introduced Bruce Springsteen onto the stage for a performance of “My Hometown.” “Bruce, you can rock the house like nobody else,” said De Niro. “Even more important in these perilous times, you rock the vote. Always fighting for, in your own words, truth, transparency, integrity in government. Boy, do we need that now.”

De Niro is a frequent critic of Trump. During a charity fundraising dinner benefiting the Fulfillment Fund in March, De Niro took the opportunity to bash Trump in a speech after praising the fund’s work. “A college education is important, but education without humanity is ignorance. Look at our president. He made it through the University of Pennsylvania, so he was exposed to a quality education, but he’s still an idiot. And he lacks any sense of humanity or compassion,” he said.

The veteran actor explained his dislike of Trump again in April when acknowledging the President’s tense relationship with the press. “America’s being run by a madman who wouldn’t recognize the truth if it came inside a bucket of his beloved Colonel Sanders Fried Chicken. When he doesn’t like what he hears, he dismisses it by saying it’s un-American and damning it as ‘fake news.’ But we know the truth. All thinking people do know the truth. Your job is difficult enough without being attacked by our lowlife-in-chief,” he told members of the press during the opening night of the 2018 Tribeca Film Festival. “That’s the new name I have for him.”

Andrew Garfield began the night by dedicating his win for best actor in a play to the LBGTQ community. “At a moment in time where maybe the most important thing that we remember now is the sanctity of the human spirit, it is the profound privilege of my life to play Prior Walter in Angels in America, because he represents the purest spirit of humanity and especially that of the LGBTQ community,” he began. “It is a spirit that says no to oppression. It is a spirit that says no to bigotry. No to shame. No to exclusion. It’s a spirit that says we are all made perfectly and we all belong. So I dedicate this award to the countless LGBTQ people who have fought and died to protect that spirit. To protect that message. For the right to live and love as we are created to.”

Garfield’s character Prior Walter is a gay man with AIDS. Following his diagnosis, his boyfriend Louis breaks up with him and he is left feeling alone and vulnerable. Throughout the play he is visited by ghosts that claim to be his ancestors, which causes him to question his sanity. Walter is believed to represent the AIDS epidemic that took place in the 1980s and depicts how it impacted the gay community.

Garfield concluded, “We are all sacred and we all belong. So let’s just bake a cake for everyone who wants a cake to be baked.”

The actor’s final comments alluded to the Supreme Court’s recent decision, which ruled narrowly for a Colorado baker who wouldn’t make a wedding cake for a same-sex couple. The court, however, did not rule on the issue of whether a business can invoke religious objections to refuse service to gay and lesbian people.

While accepting the award for best featured actor in a play, Nathan Lane praised Angels in Americawriter Tony Kushner for the play’s everlasting relevance. “I’m standing here because Tony wrote one of the greatest plays of the 20th century and it is still speaking to us as powerfully as ever in the midst of such political insanity,” he said.