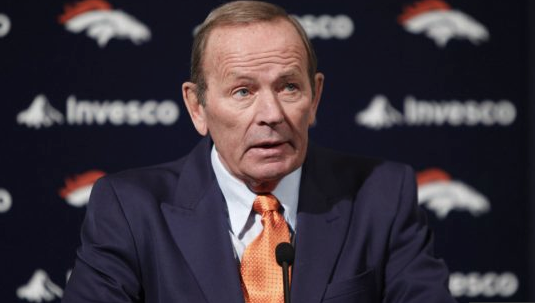 Denver Broncos owner Pat Bowlen is stepping down as he battles Alzheimer’s disease, the National Football League team said on Wednesday, adding that it was saddened he could no longer take part in the club’s daily operations.

Bowlen, 70, is one of the NFL’s most well-known owners and guided the Broncos to six Super Bowl appearances during his 30 years at the helm.

“We continue to offer our full support, compassion and respect to ‘Mr. B,’ who has faced Alzheimer’s disease with such dignity and strength,” the team said in a statement.

The team’s president, Joe Ellis, will oversee day-to-day management, while a trust will handle Bowlen’s ownership of the team.

Alzheimer’s is a degenerative brain disease with no known cure and is the most common cause of dementia in older people. Over time, it destroys one’s memory and other cognitive abilities.

Bowlen’s long-term hope is for one of his children to run the team at the appropriate time, and his succession plan will continue to be implemented, the team said.

With more than 300 victories, including six American Football League championships and back-to-back Super Bowls victories in 1997 and 1998, the team said Bowlen had established a “culture of winning” that is behind the Broncos’ success.

Ellis, who has worked with Bowlen for almost three decades, was also named as the Broncos’ chief executive officer and adds those responsibilities to his role as team president.

In a statement provided by the Broncos, Bowlen’s wife said he had decided to keep his illness private because he believed the attention should not be on him.

“Pat has always wanted the focus to be solely on the Denver Broncos and the great fans who have supported this team with such passion,” Annabel Bowlen said.

“Alzheimer’s has taken so much from Pat, but it will never take away his love for the Denver Broncos and his sincere appreciation for the fans,” she added.