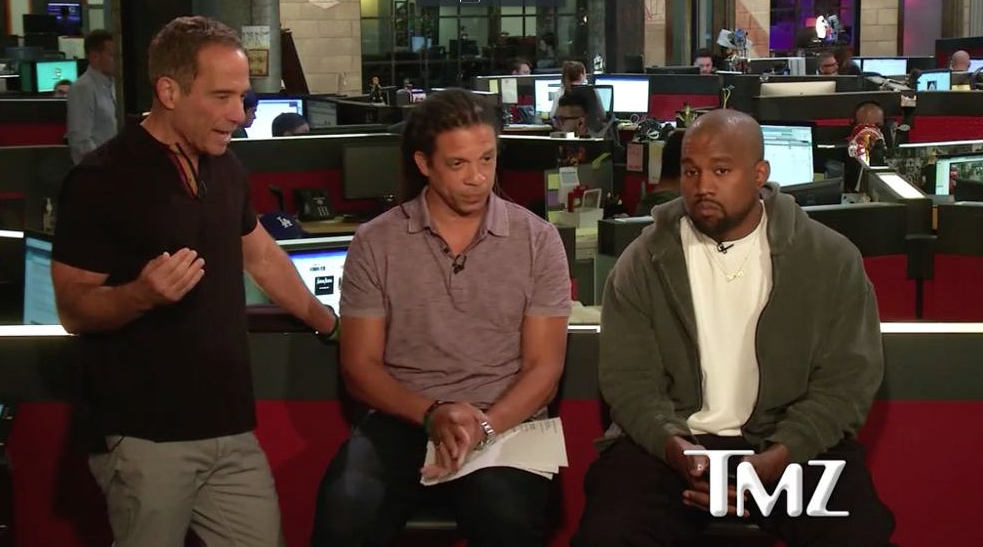 Kanye West has a lot to talk about. After releasing a behind-the-scenes visual of “Ye vs. the People” and his nearly two-hour interview with Charlamagne Tha God on Tuesday (May 1), West took a break from his Twitter spree to crash the TMZ newsroom to explain his latest antics — and things got intense.

TMZ’s Harvey Levin questioned Kanye about his choice to rock the “Make America Great Again” hat, which Ye said was just “a feeling I had.”

“People were taught how to think, we’re taught how to feel. We don’t know how to think for ourselves. We don’t know how to feel for ourselves. People say, ‘Feel free,’ but they don’t really want us to feel free and I felt a freedom,” he said. He later admitted, “I just love Trump, that’s my boy,” and said that hip-hop has long referenced the former reality star in music but ever since he took office, everyone is against him.

Then, Kanye offered his thoughts on slavery. “When you hear about slavery for 400 years — for 400 years? That sounds like a choice,” he said. “Like, you were there for 400 years and it’s all of you all?” Ye told the TMZ Live reporters that “we’re mentally imprisoned.”

Kanye’s speech didn’t go over well with TMZ staffer Van Lathan, who called out the rapper during the office visit for his “absence of thought.”

“The reason why I feel like that is because Kanye, you’re entitled to your opinion, you’re entitled to believe whatever you want, but there is fact and real-world, real-life consequence behind everything that you just said,” Lathan said. “While you are making music and being an artist and living the life that you’ve earned by being a genius, the rest of us in society have to deal with these threats to our lives. We have to deal with the marginalization that has come from the 400 years of slavery that you said for our people was a choice.”

The reporter continued, saying, “Frankly, I’m disappointed, I’m appalled, and brother, I’m unbelievably hurt by the fact that you have morphed into something to me that is not real.” The video shows West walking over to the reporter to apologize for hurting him.

At one point during his visit, Kanye revealed that he got liposuction and became addicted to the pills he was prescribed after his operation. “I was drugged the fuck out, bro, I was drugged out. I was on opioids. Two days after I got off of opioids — I was addicted to opioids — I’m in the hospital,” he continued. He stood up and demanded attention from the reporters in the room and confessed: “I was addicted to opioids. I had plastic surgery because I was trying to look good for y’all, I got liposuction because I didn’t want y’all to call me fat like y’all called Rob at the wedding and made him fly home before me and Kim got married.”

Ye also told the room that the reason he went on his Twitter rants following his visit to Trump Tower in 2016 was because he went from taking two pills a day to being prescribed to take seven pills.