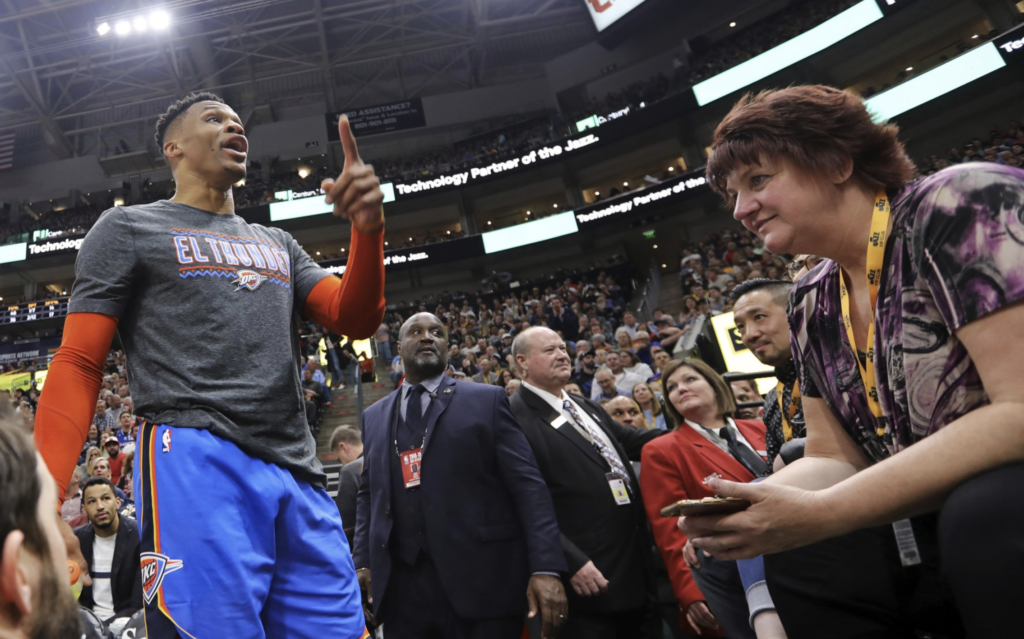 NSFW: Russell Westbrook got into a verbal altercation with a fan in Utah: “I'll f--- you up. You and your wife.”
(via @E_Woodyard) pic.twitter.com/vGZCmPktqe

F*cking With Westbook Is A Foolish Move

The Utah Jazz have permanently banned a fan who was at the center of a verbal altercation with Russell Westbrook on Monday night. The team said Tuesday the ban is effective immediately and includes all arena events. The NBA star is also facing a fine by the league.

“The Utah Jazz will not tolerate fans who act inappropriately. There is no place in our game for personal attacks or disrespect,” the team said. “The ban is based on excessive and derogatory verbal abuse directed at a player during the game that violated the NBA Code of Conduct.”

The team’s president also weighed in.

“Everyone deserves the opportunity to enjoy and play the game in a safe, positive and inclusive environment,” Utah Jazz’s president Steve Starks said. “We all have a responsibility to respect the game of basketball and, more importantly, each other as human beings.”

The incident broke out Monday night during the first half of the Oklahoma City Thunder’s win against the Jazz in Salt Lake City. Westbrook threatened the fan, who was later identified as Shane Keisel. Westbrook said he was triggered by comments he considered “racial” and “inappropriate.”

A visibly angry Westbrook was caught on camera hurling expletives directed at Keisel, telling him that he was going to “f*** up” him and his wife. Westbrook said Keisel told him to, “Get down on your knees like you’re used to.” He believed it was “racial” and “inappropriate,” and he made a point about players’ safety.

Keisel claimed he didn’t use any insults at Westbrook, but he took issue when Westbrook went after his female companion.

“He can threaten me all he wants, but don’t threaten a woman,” he said. “Her first NBA game ever. Welcome to the NBA, Jen.”

Westbrook addressed that part of his tirade: “As for beating up his wife, I’ve never put my hand on a woman. I never will. Once he said the comment, his wife repeated the same thing to me. That’s kinda how that started.”

Following the announcement from the Utah Jazz, the NBA has fined Westbrook $25,000 for “directing profanity and threatening language to a fan.”