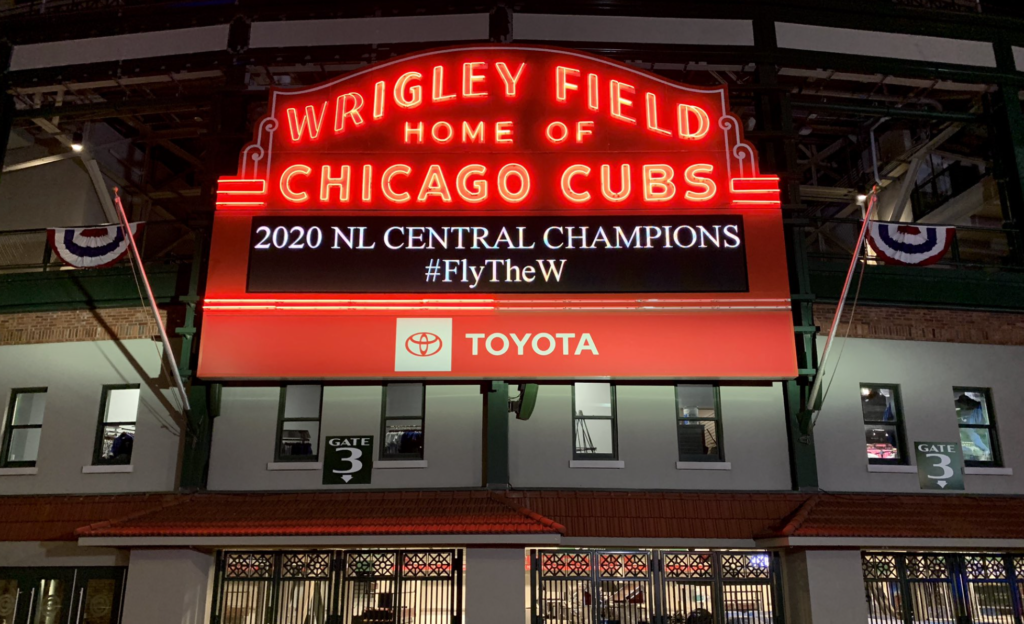 There was no raucous champagne-filled celebration for the Cubs like in the past. Given the unique nature of this season, the carpet in the visitors’ clubhouse at Guaranteed Rate Field was saved from a heavy drenching and no plastic sheeting was required to protect the lockers.

And perhaps that was fitting for this particular Cubs team, because clinching the National League Central, as they did on Saturday night, was merely the next step to the larger goal. Now, the Cubs can begin concentrating on bringing another World Series trophy to the fan base on the North Side.

“We’re very grateful to be in the playoffs,” Cubs first baseman Anthony Rizzo said. “But our expectation is to win the World Series.”

The Cubs clinched their first division title in three years even before concluding their 9-5 loss to the White Sox. The Brewers’ victory over the Cardinals in St. Louis made the Cubs the 2020 NL Central champions, locking Chicago into the No. 3 seed in the playoffs.

As the NL’s third division winner — behind the Dodgers (No. 1) and Braves (No. 2) — the Cubs will host a Wild Card Series at Wrigley Field, beginning Wednesday. The Marlins, Cardinals, Reds and Brewers are all in the mix to be the No. 6 seed that the Cubs will face.

“It’s hard to quantify what I’m feeling right now, how proud I am of these guys,” Cubs manager David Ross said. “I don’t even know what to say to all that. It’s just a unique situation and I’m just thankful to have such a good group and the support from the top down.”

The final score on Saturday was more footnote than anything, but a few elements felt symbolic.

Lefty Jon Lester was on the mound and Ross in the dugout. They both joined the Cubs as players back in 2015, when the franchise was coming out of a rebuild and beginning to embrace expectations. Kris Bryant — the ’15 NL Rookie of the Year and ’16 MVP — launched a grand slam in his return to the lineup after an injury setback.

They were, of course, all part of the historic ’16 World Series triumph, which ended the Cubs’ 108-year championship drought. Four years later, the remaining core of that team — a few approaching uncertain futures with the club — are still trying to chase down an elusive second ring.

“We don’t want to be known just for breaking the curse,” Cubs outfielder Kyle Schwarber said before Saturday’s game. “We want to keep doing this thing.”

Bryant agreed that the core of this Cubs team wants to be known for more than that one magical season.

“This year, it’s nice to be in the playoffs. I certainly think at the end of it all, a ring is going to be legitimate to whoever wins, because everybody’s going through the same situation. So, it would be kind of nice to take advantage of a weird season and put another one on the board.”

Ross understands all of that is on his players’ minds, too.

“I know it’s important to them to leave a legacy,” Ross said earlier this week. “They’re already leaving kind of a legacy that they should be really proud of, where they’ve taken this organization.

“I know they want to finish with a push and finish strong. It’s a group that’s going to be connected for the rest of their lives.”

The Cubs won the division in ’16 and did so again in ’17, but that was the last time Chicago was able to raise a Central flag.

When a young, upstart Cubs squad won 97 games in 2015 and began their climb to baseball’s mountaintop, the players hoped a string of titles was coming. They reached the NL Championship Series three years in a row (’15-17), but the Cubs lost in the NL Wild Card Game in ’18 and did not reach the playoffs last season.

“Back in 2015, we were happy to be in the playoffs,” Rizzo said. “Since ’16 and on, it’s World Series. Not making the playoffs last year, losing a Wild Card Game the year before that, this one feels good.”

It was another box checked for the Cubs. They hope getting fitted for a ring comes later.

“That should be the goal,” Lester said. “Obviously, the divisions are kind of the step going forward, right? You win the division and then you move on.”