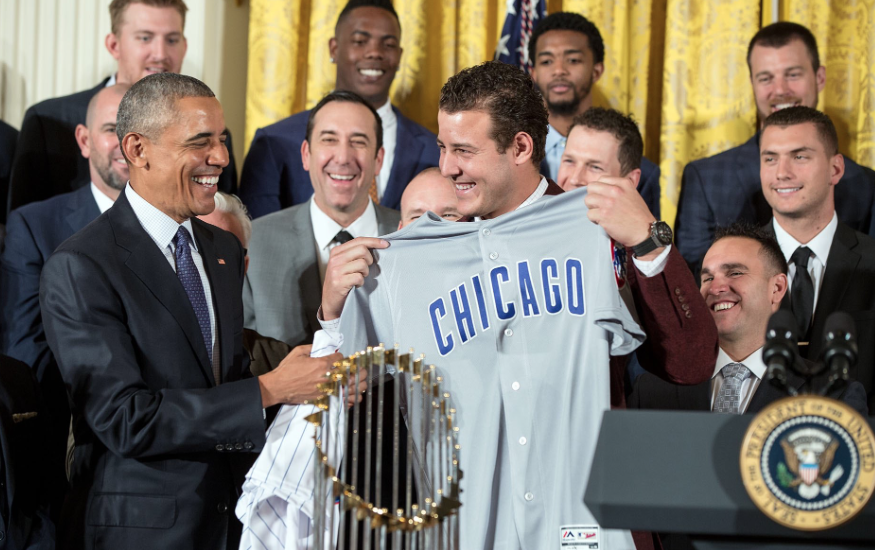 Flying The W at The White House

President Barack Obama was briefly a Cubs fan on Monday, and he helped celebrate the team’s first World Series championship in 108 years. It helped the Cubs that first lady Michelle Obama was in their corner.

The Cubs were feted at the White House by the president, who is a noted White Sox fan, but he knows the impact the North Siders’ championship has had on people, including his wife. Michelle Obama had never attended one of the White House celebrations for a sports team until Monday.

“She remembers coming home from school and her dad would be watching the Cubs game, and the bond in the family and the meaning that the Cubs had for her in terms of a connection with her father and why it meant to much to her,” Obama said. “I almost choked up listening to her. It spoke to how people feel about this organization.”

The first lady’s favorite Cubs player? Jose Cardenal. He was part of the Cubs’ traveling party, and he received a huge hug from Michelle Obama.

Generations of Cubs fans can relate to her feelings.

“It really was an amazing moment when the entire organization was waiting for a while, and the president and first lady bounded into the room with tremendous energy and gave really heartfelt remarks,” Cubs president of baseball operations Theo Epstein said. “You could tell this visit had a lot of personal meaning to them.

“She was really moved by the championship, and it was a great moment for all of us,” Epstein said.

With Obama about to leave office, Epstein offered him a midnight pardon.

“We welcome you with open arms today,” Epstein said as the Cubs presented Obama with a home and road jersey, a No. 44 from the Wrigley Field scoreboard and a lifetime pass to Wrigley Field. Cubs board member Laura Ricketts gave the pass to the president, who said the gifts were some of the best swag he’s ever gotten.

The Cubs also presented Obama with a “W” flag autographed by the team, and Epstein said they hoped he would install that at his new library.

“Mr. President, thank you for the dignity and integrity as you’ve served this country for the last eight years,” Epstein said, “and for your service to Chicago and Illinois before that, and for hosting us here today. And we look forward to seeing you at Wrigley Field.”

Hall of Famer Fergie Jenkins was in the crowd and yelled out that Obama should wear a full Cubs uniform, but the team didn’t want to push it.

“Even though it will be hard for me, Fergie, to wear a jersey, do know that among Sox fans, I am the Cubs’ No. 1 fan,” Obama said.

In his remarks, Obama noted that he and catcher David Ross have a lot in common in that they’ve both been on a year-long retirement party. The president called Joe Maddon “cool,” which the manager appreciated, and he also singled out “my fellow 44, Anthony Rizzo.”

Obama did get a couple zingers in, saying to the Cubs, “It took you long enough.”

“I’ve made a lot of promises,” Obama said. “Even I was not crazy enough to suggest that during these eight years we’d see the Cubs win a World Series.”

Obama has hosted several Chicago sports teams during his two terms, including the Stanley Cup-champion Blackhawks and the Jackie Robinson West Little League team. He presented Mr. Cub, Ernie Banks, with the Presidential Medal of Freedom in 2013, and he hosted the 1985 Super Bowl-champion Bears, who never had the chance to go after their win. Being a White Sox fan, Obama also has hosted his favorite baseball team, who presented him with a jersey in 2009.

Besides Jenkins, Hall of Famers Ryne Sandberg and Billy Williams also were part of the Cubs’ contingent, along with Dexter Fowler and Aroldis Chapman, who have signed with the Cardinals and Yankees, respectively. The Cubs’ party included nearly everyone, from the athletic trainers to the clubhouse crew.

“It’s a powerful moment, a very humbling moment,” Maddon said of the ceremony.

“I think the best part was the president talking about how sports brings people together,” Rizzo said. “No matter what’s going on in this country and the world, three or four hours of one game can rally so many people together. That was pretty meaningful.”

“This was a thrill for all of us,” Epstein said.