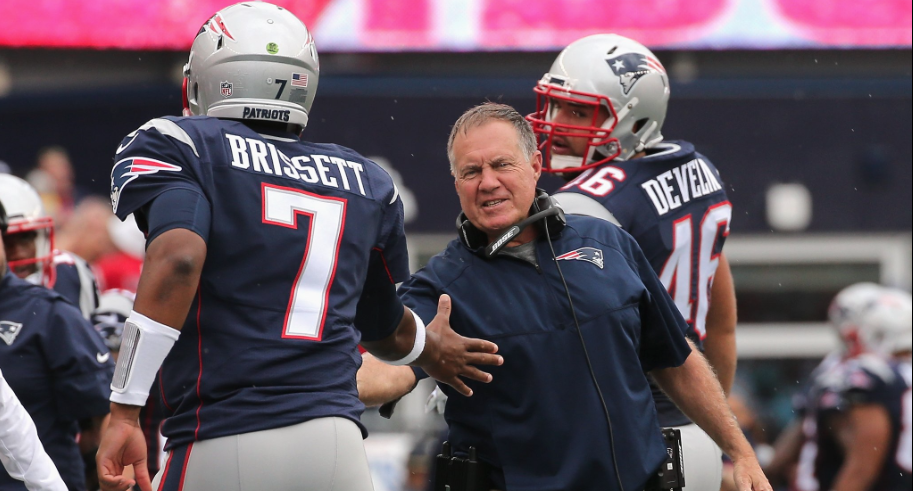 Fuck it, Bill Belichick is the GOAT!

The more assets the Patriots lose this season, the better they seem to play.

But not even one of the NFL’s top-ranked defenses could slow down a Patriots train that has barely missed a beat while getting off to a 3-0 start.

The latest exhibition was a 27-0 dismantling of the Houston Texans (2-1), a team that suddenly looked very pedestrian.

“We really asked a lot out of the team this week – they responded,” Patriots coach Bill Belichick said. “Just really proud of the way our guys competed.”

Belichick rolled the dice by not adding another quarterback to the roster during the short week, and the trust he had in rookie Jacoby Brissett proved to be spot on .

Brissett began the season as the third-string quarterback behind Brady and Garoppolo. He trotted out on the field Thursday as the first rookie start for the Patriots since Drew Bledsoe in 1993.

He didn’t have a stats-rich game, but was composed and made plays when it counted. He finished the night 11 of 19 for 103 yards, and ran eight times for 48 yards and a touchdown.

“You just always want to be ready and we have a great team, so players just welcome you no matter who is in the huddle,” Brissett said. “At any moment in the game no one wavered, no one flinched, and the results proved themselves with what our team did tonight.”

Under Belichick, quarterbacks are 6-0 in their first career start.

The Patriots have 10 days to recuperate, with only a game against Buffalo (0-2) on Oct. 2 remains before Brady could inexplicably return to a 4-0 team.

Meanwhile a Texans team that looked so promising after wins over Chicago and Kansas City, was lethargic in all three phases.

But Houston coach Bill O’Brien said it’s much too early to panic.

“Losing is horrible. I mean it’s absolutely horrible,” he said. “There is nothing really in my mind that comes out good, but what I will say is that there is a resilient team in that locker room. These guys work hard. …There is a lot of season left. We haven’t even played a division game.”