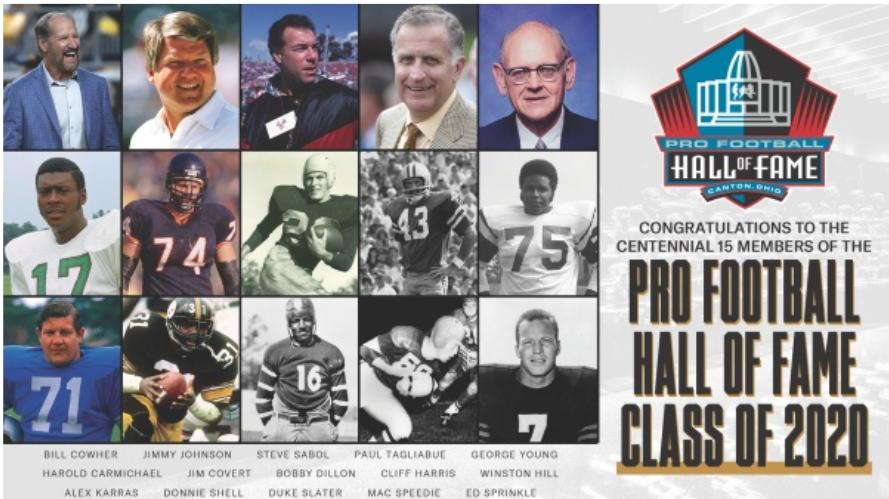 Get The Gold Jackets Ready

The Pro Football Hall of Fame Centennial Class of 2020’s remaining 13 inductees — 10 seniors and three contributors — were revealed Wednesday on Good Morning Football. They followed the previous announcements over the weekend of Bill Cowher and Jimmy Johnson. The 15 inductees will be joined by five modern-day selections announced the day before the Super Bowl during NFL Honors on Feb. 1.

Here are the members of the Pro Football Centennial Class of 2020:

They called him “Jimbo,” and in the shadow of one of the most famed defensive teams of all-time, Jim Covert was an offensive standout who paved the way for all-time great Walter Payton when the Bears won Super Bowl XX. A two-time All-Pro selection, Covert was the sixth overall pick in the 1983 NFL Draft, the No. 13 Bear of all-time in the franchise’s top 100 list and a member of the NFL’s 1980s All-Decade Team.

Protecting Joe Namath’s backside autumn after autumn, Winston Hill was a four-time AFL All-Star and four-time Pro Bowl pick. The left tackle also earned three All-Pro nods during a decorated 15-season career that at one point boasted a string of 174 starts. The Texas native was a crucial cog in the Jets winning Super Bowl III.

There are prototypical wide receivers and there is Harold Carmichael, a Philly favorite who boasted a 6-foot-8, 225-pound frame. A four-time Pro Bowler, three-time All-Pro and NFL 1970s All-Decade Team honoree, the big-bodied Eagle produced three 1,000-yard seasons and proved pivotal in Philadelphia advancing to its first Super Bowl in 1980. He ended his days with the Eagles as the career leader in every major receiving statistic and for his career had 590 catches for 8,985 yards and 79 touchdowns.

A transformative and hugely important figure in the history of football, Duke Slater was the first African-American lineman in league chronicle. A standout on both sides of the ball, Slater was a multiple-time All-Pro.

A two-way player at the onset of his NFL career, Ed Sprinkle’s reputation truly grew and remained due to his defensive prowess. Known for his hard-charging ways and aggressive play, Sprinkle helped the Bears to a 1946 NFL Championship, was a four-time Pro Bowl pick and was a member of the 1940s All-Decade Team.

A memorable voice who told the tale of autumns past to NFL fans, Steve Sabol took over as the president of NFL Films in 1985 from his father Ed, who created the company. During his time with NFL Films, Steve Sabol won more than 40 Emmy Awards and oversaw 107 Emmy wins for NFL Films.

One of the NFL alumni’s most famous faces on the big and small screen, Alex Karras was as destructive on the NFL field as he was noticeable in projects such as “Blazing Saddles” and the TV show “Webster.” Through his career with the Lions, the 1958 first-round pick was a four-time Pro Bowl pick, a three-time All-Pro and an NFL 1960s All-Decade Team selection.

A ball hawk in the Packers‘ defensive backfield for eight seasons, Bobby Dillon tallied 52 career interceptions during his days in Green Bay. He had an eye-popping nine picks in three individual seasons. For five straight years, Dillon was a Pro Bowler with three of those seasons accompanied by All-Pro accolades.

The Steel Curtain defense was loaded with talented standouts and Donnie Shell was one of them. For 14 seasons, Shell patrolled the defensive backfield, winning four Super Bowls, nabbing five Pro Bowl selections and garnering 51 interceptions. Shell’s interception total was the most all-time for a strong safety upon his retirement and is currently tied for 32nd.

One of the most respective NFL executives of his day, George Young aided mightily in the Giants winning two Super Bowls during his time as general manager from 1979-1997. Thereafter, he was the NFL’s senior vice president of football operations from 1998-2001.

Throughout the 1970s, Cliff Harris was a phenomenal constant in the defensive backfield for America’s Team. Amazingly, Dallas made it to the postseason in nine of Harris’ 10 seasons, including five Super Bowl appearances with two victories. A Pro Bowler in six straight seasons starting in 1974 and going through the final campaign of his career, Harris was a three-time All-Pro who tallied 29 interceptions and 18 fumble recoveries.

Bestowed with a fitting name for his future NFL prowess, Mac Speedie was a receiver before his time. Named to the NFL’s 1940s All-Decade Team, the six-time All-Pro led the league in receptions on four occasions and twice was led in receiving yards. In 1947 and 1949, he surpassed the 1,000-yard receiving barrier.

The NFL’s leading man for parts of three decades, Paul Tagliabue led the league into the 21st century and oversaw its expansion from 28 to 32 teams. During his time, the Jacksonville Jaguars, Carolina Panthers, Houston Texans and reborn Cleveland Browns all came to be. He also navigated the NFL’s expansion into Europe and helmed the league through the most arduous times such as the tragedies of 9/11 and Hurricane Katrina.