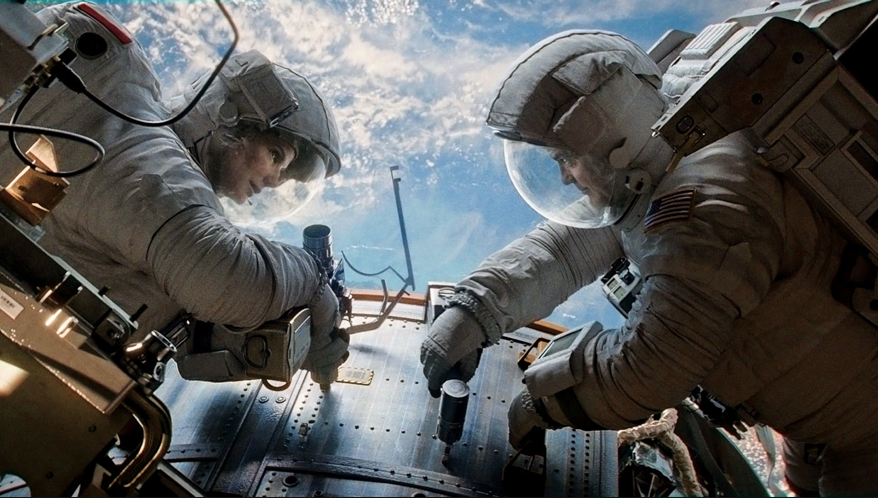 Con-men caper “American Hustle” and space thriller “Gravity” led Oscar nominees on Thursday with 10 nominations each, including best picture, in the race for the world’s top film prize.

Slavery drama “12 Years a Slave” received nine nominations, including in the best picture category, in a year crowded with high-quality films.

Those three films will be joined by six others in the best picture competition: “Captain Phillips,” “Dallas Buyers Club,” “Her,” “Nebraska,” “Philomena,” and “The Wolf of Wall Street.”

Members of the Academy of Motion Picture Arts and Sciences may nominate up to 10 films for best picture, but only chose nine this year. A notable exclusion was the Coen Brothers’ “Inside Llewyn Davis,” which had won some top critics’ awards.

Eight individuals in the acting categories are first-time nominees, including Chiwetel Ejiofor as the free man sold into slavery in “12 Years a Slave.” He will compete in the best actor race with Matthew McConaughey, the Golden Globe winner last Sunday for his role as the unlikely AIDS crusader in “Dallas Buyers Club.”

Meryl Streep extended her lead as the most nominated performer with an 18th nomination, this year for best actress as the matriarch in “August: Osage County.” She goes up against fellow Oscar winners Sandra Bullock as the astronaut lost in space in “Gravity” and Cate Blanchett as the riches-to-rags socialite in Woody Allen’s “Blue Jasmine.”

The Academy will hand out the Oscars at a ceremony hosted by comedian Ellen DeGeneres in Los Angeles on March 2.

14. Sound Editing: “All Is Lost,” “Captain Phillips,” “Gravity,” “The Hobbit: The Desolation of Smaug,” “Lone Survivor.”

16. Original Song: “Alone Yet Not Alone” from “Alone Yet Not Alone,” Bruce Broughton and Dennis Spiegel; “Happy” from “Despicable Me 2,” Pharrell Williams; “Let It Go” from “Frozen,” Kristen Anderson-Lopez and Robert Lopez; “The Moon Song” from “Her,” Karen O and Spike Jonze; “Ordinary Love” from “Mandela: Long Walk to Freedom,” Paul Hewson, Dave Evans, Adam Clayton and Larry Mullen.

23. Live Action Short Film: “Aquel No Era Yo (That Wasn’t Me),” “Avant Que De Tout Perdre (Just before Losing Everything),” “Helium,” “Pitaako Mun Kaikki Hoitaa? (Do I Have to Take Care of Everything?),” “The Voorman Problem.”