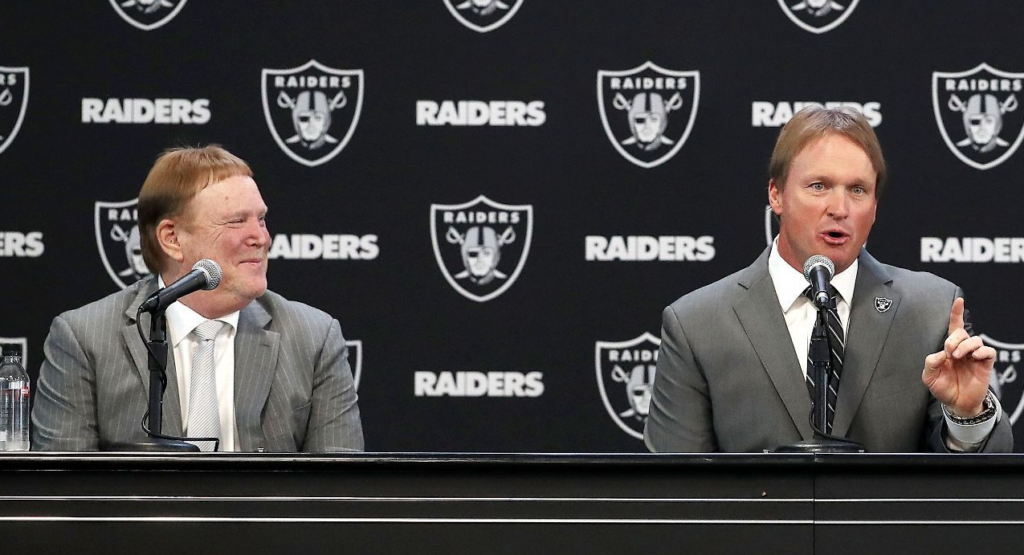 Gruden Returns To Oakland and He Better Win

The Commitment to Excellence returned to Oakland.

“Once a Raider, always a Raider. Never been more appropriate than today,” Mark Davis proclaimed Tuesday as he announced the hiring of coach Jon Gruden.

“Raider Nation, this is a big f-ing deal,” the owner gleefully bellowed.

After the team played a glitzy highlight reel of Gruden’s previous stint with the Raiders, Davis introduced the once-and-future coach to a hoard of media members and former players after nearly 17 years adrift.

“I never wanted to leave the Raiders. I never thought I’d be back,” Gruden said. “But here I am and I’m ready to get to work. And I just want to say that there’s really four major reasons that I am here coaching today. No. 1, I love football. I love the players that play it. I love the preparation. I love the journey. I love football. And I love the city of Oakland. I had a son here. Some of my great memories in life are in Oakland. And I want to give them two of the best years of football that I could possibly help deliver, and I love the Raiders. The brand is global — everywhere I went as a Monday Night Football analyst the Raider Nation would come out of the ground. I love the Raiders and most of all I love to win. I’m going to do everything I can — no guarantees, no promises — but I want to win…”

The Raiders famously traded Gruden to Tampa Bay in 2002, where he proceeded to beat Oakland in the Super Bowl. After seven years with the Buccaneers, Gruden was fired. He spent the past nine seasons in a broadcast booth as a color commentator for ESPN’s Monday Night Football.

Each new offseason brought speculation that Gruden might return to the sidelines. It wasn’t until Davis bowled the former coach over with a 10-year, $100 million contract that Gruden finally returned to the place he started his head coaching career.

“In my heart I feel this is the thing to do,” Gruden said when asked about why the timing was finally right. “This is what I want to do, this is the organization that I want to be a part of and I’m all in. This is something I feel deeply, strongly about and I’m going to do everything I can to hire a great coaching staff and put the Raiders back on track.”

Added Gruden: “I’ve prepared to come back. I’m ready to roll. I’m just ready to go. I’m at a point in my life where I needed another challenge.”

Gruden admitted much has changed since he last coached: The game is faster, the millennial players are a new breed, practice schedules are completely different since the 2011 CBA went into effect, etc. None of those deviations deterred the new Raiders leader.

“I have a lot to prove,” Gruden acquiesced. “I have not coached since 2008. I haven’t won a game since 2008 — I haven’t lost any either. I just want to keep that in perspective. I’ve got to hire a great coaching staff — that’s been the No. 1 criteria that I’ve tried to bring every place that I’ve been as a head coach. It’s about the people. It’s about the staff. It’s about the tempo that we establish as a coaching staff so with that said, I got a lot to prove, I know that. But the game is still decided by players between the lines and we all have to adapt every year.”

Gruden declined to get into specifics of his monstrous contract — playing coy — and joked (maybe?) that he has a no-trade clause in his deal this time. The coach also steered clear of discussing any specifics about the nature of the team he’s taking over, which is coming off a disappointing 6-10 season, but did heap praise on quarterback Derek Carr.

“He has a great arm talent. He’s athletic. He’s got natural leadership skills. He’s young. He’s in his prime,” Gruden said of Carr. “He’s healthy now. He’s I think been in a lot of different systems — he’s played for a number of different [coaches] or has not [had] a lot of continuity around him that way. I think he’s got a huge upside. I think with Greg Olson and the system we’re going to put in place, it’s going to demand a lot from him and I think that’s what is going to unlock the greatness in him. [I’m] very, very excited to have him as our quarterback.”

The excitement and resolve with which Gruden spoke underscores the reasons he’s been sought after as a coach despite almost a decade away from the sideline. The ability to make players want to run through walls for him is an underrated talent. Gruden’s beaming style had Davis proclaiming “this is the best day of my life.”

The last time Gruden patrolled the sideline was one of his worst as a Raider: An overtime loss to the New England Patriots in a snowy Foxborough, in what would be known as the “Tuck Rule Game.”

The 54-year-old coach said the bitterness of that loss, followed by the trade to Tampa, compelled him to return to Oakland to finish the job.

“There is unfinished business,” Gruden said matter-of-factly. “And as a coach, I was traded. I’ve been fired. I’ve missed the game terribly. But I’ve really missed the Raiders. For my career to end on that night in New England. It still ticks me off. I’m so thrilled to be back here. I hope people understand the emotion inside of me. I feel unfished business. I also feel a lot of loyalty, and I feel a lot of responsibility to get the Raiders going again. It’s been a while since we consistently performed at a high level and that’s really all I care about. I’m going to do everything I can to help this team get right again.”