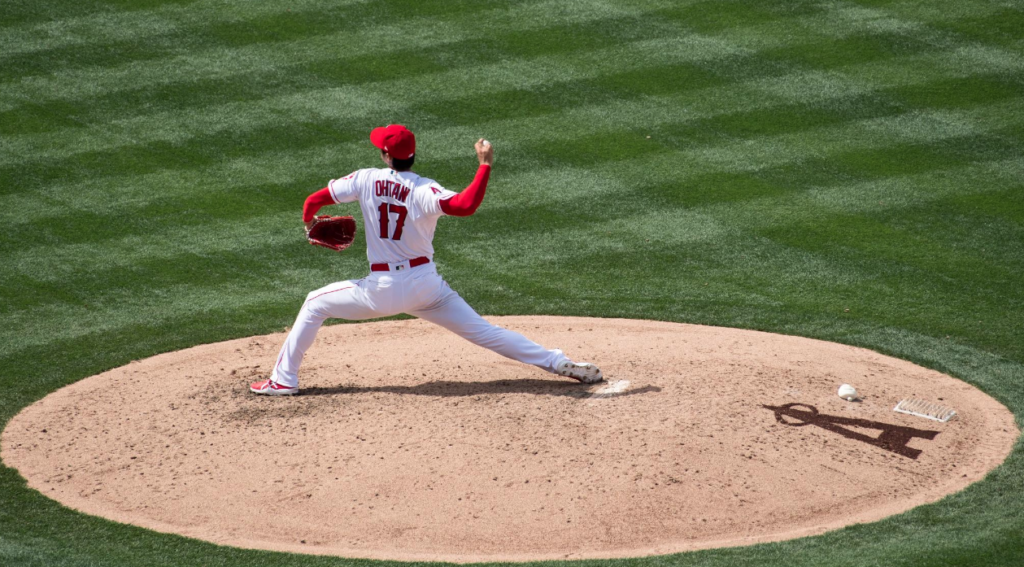 Shohei Ohtani seemed to be the only person in Angel Stadium who wasn’t incredibly impressed while he mowed down the Oakland Athletics’ first 19 batters in order.

But when Ohtani finally yielded a hit and then struck out Matt Olson with two runners on to end the seventh inning, he gave a fist pump and a celebratory scream at the ground while the crowd rose for a standing ovation.

Even the two-way Japanese sensation realized his first home pitching start was a thrilling moment in his increasingly incredible rookie season.

Ohtani threw seven shutout innings of one-hit ball in his home debut on the mound, propelling the Los Angeles Angels to a 6-1 victory Sunday.

Marcus Semien’s clean one-out single to left broke up Ohtani’s bid for a perfect game, but he finished the inning with his 12th strikeout. Mixing 99 mph fastballs with precipitous breaking pitches and tremendous professional cool, Ohtani (2-0) was too much for Oakland — until the seventh, when he showed resilience too.

“I wanted to keep a clean zero on the board,” Ohtani said. “One hit would [mean] two runs, and it’s a huge difference. I wanted that strikeout, and I got it.”

Ohtani struck out the side twice during the latest feat in a series of early-season superlatives by the 23-year-old prodigy. He won his pitching debut in Oakland last weekend with six strong innings, and he homered in three consecutive games in Anaheim between starts in his attempt to become the first regular two-way player in decades.

“Especially with how my spring training went, I wasn’t really imagining [the start of the season] to be this good, to be honest,” Ohtani said. “I feel better every day. I feel like I’m getting used to everything more and more each day. But it’s just the first week.”

He was sharp from the beginning on a gorgeous day in Orange County, striking out the side in the first inning on 15 pitches. Ohtani struck out the side again in the fifth inning, and he fanned every Oakland batter except Jonathan Lucroy at least once.

“He got off to a good start, the crowd got into it [and] he got a little bit of a generous strike zone, all of that,” Oakland manager Bob Melvin said. “But the bottom line is, he pitched really well.”

Jed Lowrie drew a four-pitch walk after Semien’s single, but Ohtani ended the threat by inducing Khris Davis’ weak groundout before fanning Olson. He left the mound to the last of several standing ovations from his enthralled new fans in the sellout crowd — an unheard-of gathering at Angel Stadium in April.

“It’s a rare kind of talent to do it both ways, and it’s great to watch,” Angels second baseman Zack Cozart said. “It didn’t look like [the A’s] had a chance up there, the way he was throwing.”

Teammate Ian Kinsler snickered, while Cozart added: “People thought he should be in the minor leagues, apparently, to start the year.”

Mike Trout and Ryan Schimpf homered, and Albert Pujols had an RBI double in the Angels’ seventh win in nine games.

Kendall Graveman (0-2) gave up five hits and four walks while failing to get out of the fourth inning for the A’s, who have lost seven of 10. Matt Joyce homered in the ninth for Oakland.