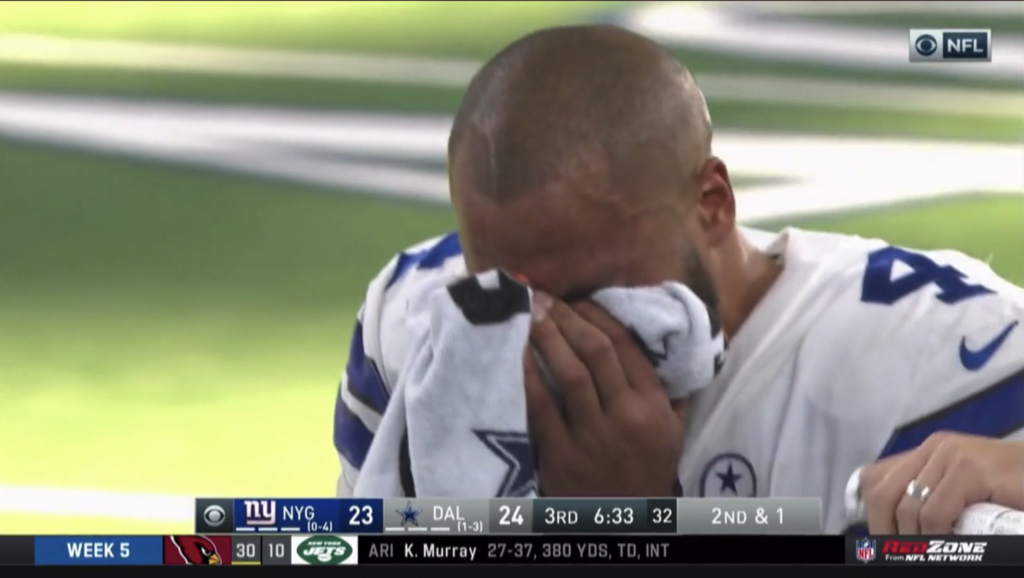 Cowboys quarterback Dak Prescott underwent successful surgery Sunday night after suffering a compound right ankle fracture and dislocation in the third quarter of Dallas’ 37-34 win over the New York Giants, the team announced. He is expected to be released from the hospital Monday.

On what appeared to be a designed quarterback draw play on a first-and-10 from the New York 27-yard line, Prescott picked up nine yards but his lower right leg twisted awkwardly on a tackle by the Giants’ Logan Ryan.

Prescott was carted off the field as many of his teammates offered him encouragement, shedding tears as he exited. The Cowboys later announced he was transported to a local hospital.

“I feel terrible for him,” coach Mike McCarthy said. “He was having a tremendous year. He has made such an impression on me and clearly a leader on this football team. No doubt he will bounce back.”

Jerry Jones said in a statement Sunday night that the organization has “no doubt” that Prescott will return “to the position of leadership and purpose that he brings to our team.”

Prescott’s injury — which is expected to sideline him the rest of the season — reverberated throughout the locker room following the game.

Running back Ezekiel Elliott said, “It sucks. It sucks. I know we won. But it sucks to lose Dak, our leader.”

Rookie wideout CeeDee Lamb told reporters he reached out to Prescott immediately after the game.

“I appreciate everything he’s done for me,” Lamb said. “I can’t thank him enough. I told him we’re gonna hold it down until we get to see him on the field with us again.”

Linebacker Jaylon Smith said, “Devastating when you lose your No. 1. I know how it feels. I’ve experienced it myself. I know Dak is a fighter. Just looking forward to hearing his voice … When that happened, everything was about 4. It was about getting that win for him.”

Prescott had been off to a remarkable start to the season in passing for more yardage than any QB in NFL history over a four-game span (1,690). The 27-year-old Pro Bowler is playing on Dallas’ franchise tag after he and the team were unable to agree to terms on a long-term deal in the offseason.

Andy Dalton replaced Prescott with the Cowboys holding a 24-23 lead and led the offense on a game-winning drive in the closing seconds.

“First and foremost, the worst thing that happened today was the Dak injury,” Ryan said to open his postgame press conference. “I mean, bigger than football. I feel terrible.”

Hall of Famer and Cowboys great Troy Aikman was one of many from the NFL community to send their well wishes to Prescott on social media.