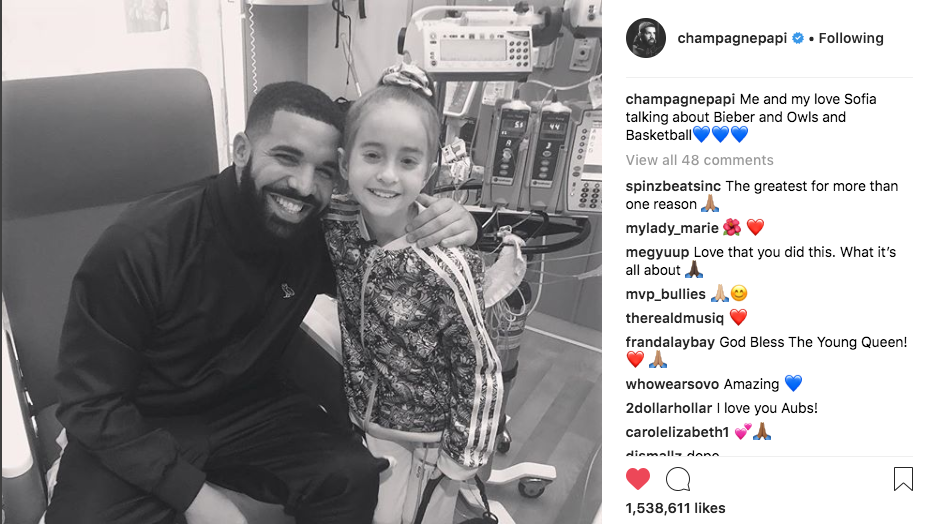 If You Can’t Salute Drake For This, You’re A Hater

It was a birthday wish come true for eleven-year-old Sofia Sanchez.

The youngster, who is awaiting a heart transplant at Lurie Children’s Hospital in Chicago, got a surprise visit from singer Drake on Monday afternoon. The visit was prompted by a YouTube video Sofia posted earlier in the week in which she invited her superstar idol to stop by. In her video, Sofia, tethered to a portable IV pump, and her cousin performed “The KiKi Challenge” in the hospital hallway.

A video snippet of the visit, released by the hospital late Monday, shows a smiling Drake arriving at her bedside and remarking, “You asked me to come, and I’m here.”

The superstar rapper was in town for concerts over the weekend at the United Center, including Saturday, the same day Sofia celebrated her 11th birthday.

According to a spokesperson for the the hospital, Sofia and Drake “bonded over Justin Bieber, basketball and Drake’s two dogs.” They also took selfies and sang her favorite Drake song, “God’s Plan.” The spokesperson added that Sofia said meeting him “was a miracle” and the “best birthday gift ever. ”

Drake released images of their visit via his Instagram account Monday afternoon, noting “Me and my love Sofia talking about Bieber and Owls and Basketball.”