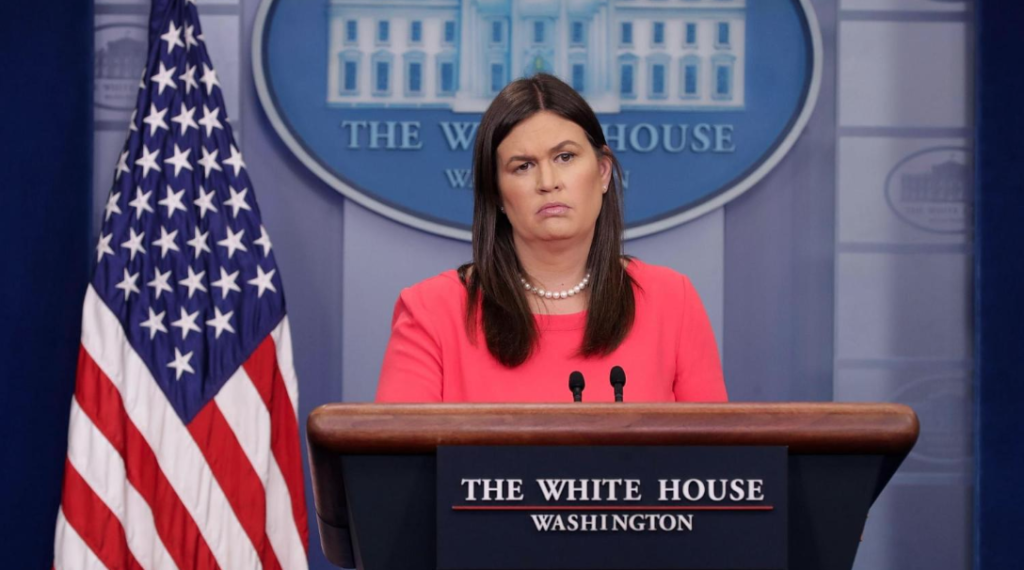 White House press secretary Sarah Huckabee Sanders was asked to leave a restaurant in Virginia Friday night by the business owner because of her connection to President Donald Trump, Sanders acknowledged Saturday on Twitter.

“Last night I was told by the owner of Red Hen in Lexington, VA to leave because I work for @POTUS and I politely left,” Sanders tweeted. “Her actions say far more about her than about me. I always do my best to treat people, including those I disagree with, respectfully and will continue to do so.”

The restaurant’s Facebook page was inundated with posts supporting Sanders and deriding the restaurant in Lexington, about a three-hour drive southwest of Washington, D.C. Calls to the restaurant were routed to a voicemail box that was full.

It was the second night in recent days that a member of the Trump administration was hounded from a restaurant. On Tuesday, protesters heckled Department of Homeland Security Secretary Kirstjen Nielsen as she ate at an upscale Mexican restaurant in Washington.

She, too, left the restaurant. The demonstrators jeered “End Family Separation,” referring to the policy that Trump reversed on Wednesday. The policy had required that adults arrested trying to cross the U.S. border illegally be criminally prosecuted. If accompanied by children, those kids could not be incarcerated with the adults.

Since the policy was enacted in May, border agents have separated about 2,300 children from their families.

“Bigotry,” Huckabee tweeted. “On the menu at Red Hen Restaurant in Lexington VA. Or you can ask for the “Hate Plate”.  And appetizers are “small plates for small minds.”

The brawl spilled onto Yelp, the ratings web site. Some supporters of Sanders and Trump panned the restaurant, while their opponents backed the Red Hen and one complained of death threats. Yelp stepped in and tried to referee.

“This business recently made waves in the news, which often means that people come to this page to post their views on the news,” according to Yelp. “While we don’t take a stand one way or the other when it comes to these news events, we do work to remove both positive and negative posts that appear to be motivated more by the news coverage itself than the reviewer’s personal consumer experience with the business.”

Trump’s policy reversal has sent federal officials scrambling to accommodate families arrested at the border and held before their cases are heard by immigration officials. The Pentagon has identified bases near the border where as many as 20,000 people could be held. Ft. Bliss near El Paso, Texas and the Mexican border has been identified as a likely venue for the temporary housing camps.