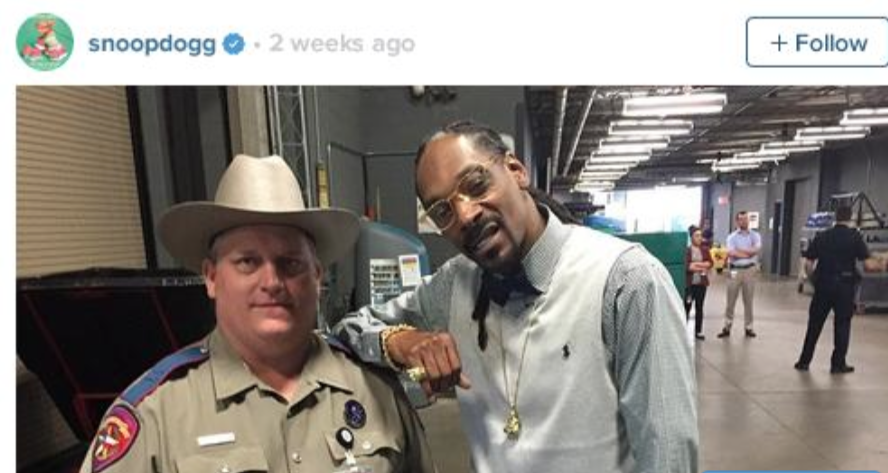 If You’re a Fan of Snoop Dogg, You Could Lose Your Job

Texas’ chief law enforcement official called Snoop Dogg a “dope smoking cop hater” before reprimanding a state trooper who posed for a picture with the rapper, according to emails made public Wednesday.

Snoop Dogg posted a photo to Instagram with Department of Public Safety Trooper Billy Spears in March with the comment “Me n my deputy dogg.” It was taken during the South by Southwest music festival, where Spears was working off-duty as extra security.

Spears is now suing DPS after being disciplined for taking a picture with a public figure who has a several convictions for drug possession.

Emails obtained by Spears’ attorney through open records laws show that the incident went all the way to DPS Director Steve McCraw, who is best known for overseeing the state’s expansive border security operations.

“Apparently he would rather work the convention while on a week’s vacation to earn additional money rather than take an additional tour on the border,” McCraw wrote. “He must not understand that he was being lampooned by a dope smoking cop hater which reflects very poorly on the department.”

DPS spokesman Tom Vinger confirmed the authenticity of the email but did not comment on its content. He referred to the agency previously saying that DPS holds employees to high standards of conduct and judgment.

The emails include a DPS supervisor explaining that Spears and other troopers have routinely taken pictures with other celebrities at SXSW. He mentions actor Robert Duvall, former NBA star Shaquille O’Neal and musicians Cee Lo Green and Rob Zombie.

Spears is seeking unspecified damages in a Travis County court. He claims his discipline was retaliation for filing a complaint several weeks earlier against a superior.