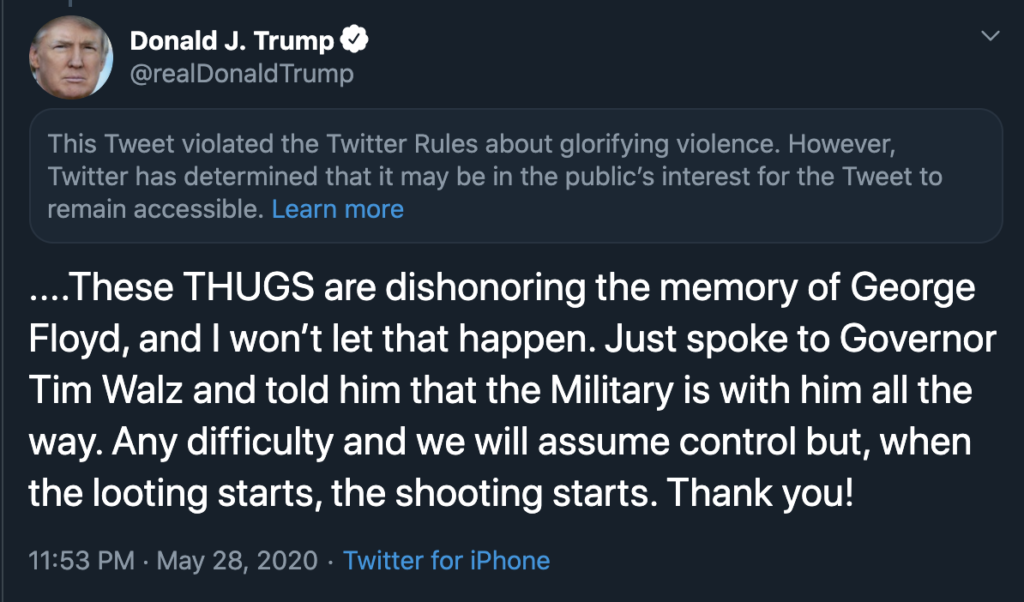 Is America Great Again Yet?

Twitter has placed a public interest notice on a tweet from U.S. President Donald Trump about continued protests in Minneapolis following the death of George Floyd, a black man, in police custody.

Trump’s tweet said: “These THUGS are dishonoring the memory of George Floyd, and I won’t let that happen. Just spoke to Governor Tim Walz and told him that the Military is with him all the way. Any difficulty and we will assume control but, when the looting starts, the shooting starts. Thank you!”

The social media giant’s notice said that the tweet “violated the Twitter rules about glorifying violence. However, Twitter has determined that it may be in the public’s interest for the tweet to remain accessible.”

Twitter’s policy of adding a warning to tweets that break its rules when it comes to major public figures, instead of deleting them outright, was unveiled in mid-2019. The notice means that other Twitter users can not like, reply to, or retweet Trump’s post. However, a retweet is still possible with a comment attached to it.

“Glorifying violent acts could inspire others to take part in similar acts of violence,” Twitter says in its “glorification of violence policy.”

Twitter’s decision to add the notice to the President’s tweet comes amid an intensifying showdown between the company and Trump who on Thursday signed an executive order aimed at removing some of the legal protections provided to social media platforms. He argued the likes of Twitter and Facebook have “unchecked power” and were stifling conservative voices.

Twitter CEO Jack Dorsey earlier in the week reaffirmed the company’s commitment to fact check information related to elections despite a fierce reaction from the Trump administration over a pair of Trump’s tweets that were flagged as misleading on the platform.