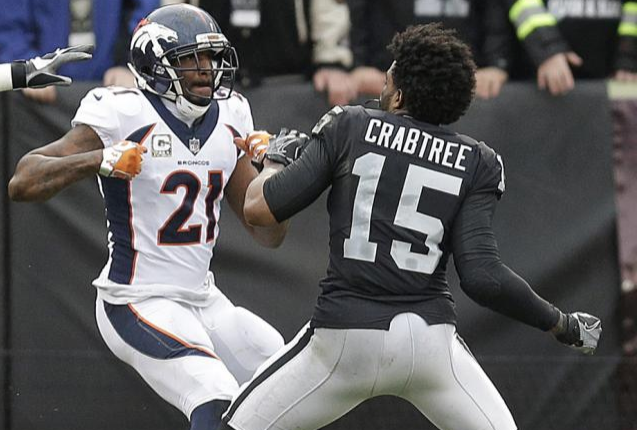 It Was A Chain-Snatchin Brawl of A Game

Michael Crabtree apparently came into the game looking for a fight.

Still upset after Denver cornerback Aqib Talib ripped a chain off his neck last season, Crabtree didn’t take long to seek revenge in his first game against the Broncos this season, leading to a full-blown brawl and three ejections on Sunday during Oakland’s 21-14 win over the Broncos.

“I guess his initiative was to come out there and fight today,” said Denver cornerback Chris Harris Jr., who said Crabtree “sucker punched” him on the previous play.

“I guess it wasn’t to play football. He came out there, just punched me in the stomach and I lost my breath.”

Crabtree has been angry ever since Talib ripped Crabtree’s chain off his neck during the regular-season finale last season. Crabtree sat out the first meeting this season in Denver with a chest injury, but sought retribution Sunday.

“We love Crab around here and we need him, but things happen,” teammate Cordarrelle Patterson said. “We all knew it was going to happen. It was just a matter of time when. Everybody was ready, prepared for it.”

On the second play of Oakland’s second drive, Crabtree aggressively blocked Talib on a running play and drove him to the ground on the Broncos sideline. Talib ripped Crabtree’s chain off his neck while they were tangled up, and a brawl ensued.

Several Broncos players surrounded Crabtree as he tussled with Talib before his Raiders teammates could come to his assistance.

“If that’s the way he wants to approach it, then I support it 100 percent,” Broncos linebacker Von Miller said. “You want to have him in there. I want to play against Crab. I want to have that type of game, but you can only control what you can control. Those guys are going to do what they’re going to do.”

Talib threw Crabtree’s helmet aside and the two then went at it near the end zone, with both players exchanging punches, even though Talib was still wearing his helmet. Crabtree’s teammate Johnny Holton joined in and grabbed Talib and then things calmed down.

“It went to another level,” Raiders quarterback Derek Carr said. “We could all feel that. It wasn’t just pushing and shoving kind of thing. I took over there and tried to get my guys out of there. It’s football. But at the same time it’s chippy. It’s a violent game. My hope is that whatever happens, it stays here.”

The three players also could be subject to further discipline from the NFL this week.

“The bottom line is we can’t afford to lose one of our top receivers and then our starting guard because he went over there and helped his buddy,” Raiders coach Jack Del Rio said. “We can’t get two guys tossed like that.”

On the previous play, Crabtree injured Talib’s Harris Jr. on a downfield block. Harris was upset after the play and yelled toward the Raiders bench. On the next play, Crabtree went after Talib.

“Aqib took that personal,” Broncos safety Justin Simmons said of the hit on Harris. “So I don’t know what happened on their side. Aqib said (Crabtree) tried to do the same thing to him. And obviously Aqib is a little more … not as genuine as Chris when it comes to that type of stuff. So he took it into his own hands.”

Meanwhile, Raiders running back Marshawn Lynch stayed out of the fray. As players on both teams fought, Lynch walked back to the Raiders sideline with his arms in the air. Lynch ran off the sideline to join a fight earlier this season against Kansas City and was ejected and suspended one game when he shoved an official.

Lynch then escorted Talib through the Raiders sideline to the tunnel to the locker room after the ejection as the crowd booed Talib loudly.

The ejection meant that Crabtree did not catch a pass in a game for the first time in his career. He had at least one catch in his first 120 games.