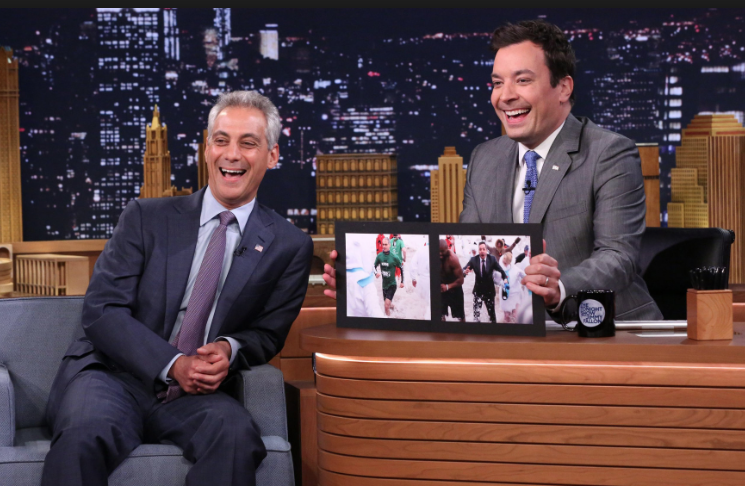 Jimmy Fallon is Bringing ‘The Tonight Show’ to Chicago

“Tonight Show” host Jimmy Fallon says he’ll keep his word to bring his show to Chicago, thanks to local students making good on their promise to read millions of words this summer.

Fallon announced Thursday on his late-night NBC show that he would make good on his deal with Chicago Mayor Rahm Emanuel to host the show from Chicago if the city’s public school students read 2.4 million books over the summer. The students did even better, according to the mayor, by reading 2.7 million books as part of his Readers Summer Learning Challenge.

The handshake wager was made in June, when Emanuel appeared on Fallon’s show in return for Fallon jumping into frigid Lake Michigan with the mayor in March during Chicago’s Polar Plunge. The comedian and former “Saturday Night Live” star took the chilly dip dressed in a business suit.

On Thursday, Fallon didn’t specify when he would host his show from Chicago, but he joked of having to pay up on Emanuel’s “friendly bet with me.”

“So congratulations Chicago, you’ve got some smart kids. You won the bet. We will be coming to Chicago,” Fallon told his television audience. “We’ve just got to figure out how to get everyone there. We have, like, 200 something people that have to go with us.

So Rahm, if you’ve got room in your house, we’ll come and hang with you.”