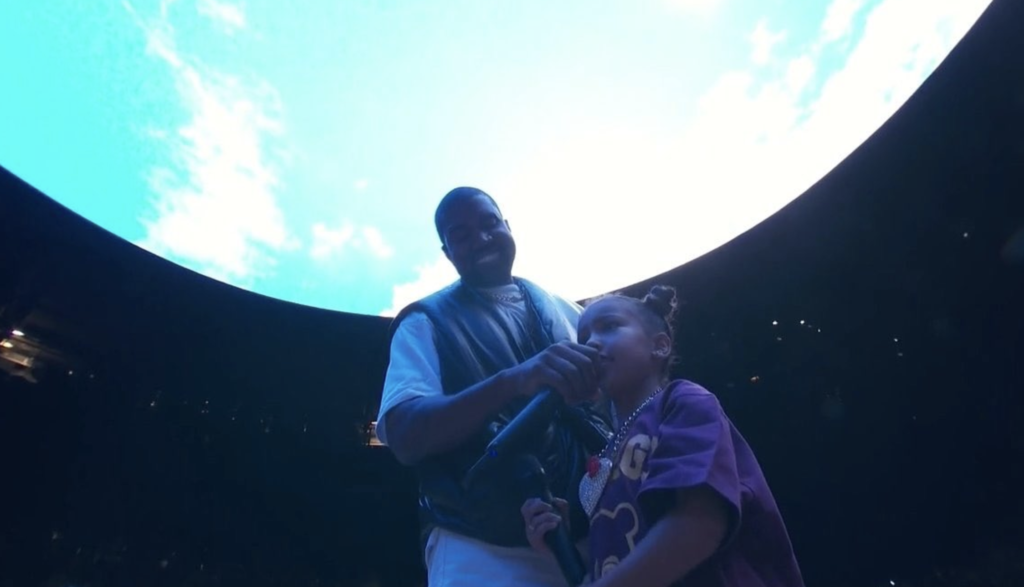 He made us wait for the coronation a little longer than promised, but Kanye West’s Jesus Is King finally dropped on Friday and has dominated cultural conversation ever since.

Yeezy is not allowing himself — or anyone else for that matter — to catch a breath. The first live performance came on Sunday afternoon (Oct. 27) at the Los Angeles Forum. Fans, friends and families gathered for a 1 p.m. start (a mere hour later than expected) to hear a number of Jesus Is King songs performed live for the first time.

Backed with his huge Sunday Service choir (led by Jason White), assisted by his daughter North and staged at the center of the arena with plants and trees arranged all around, it was an afternoon that underlined how serious the Chicago artist is about his mission to spread the gospel, and how serious he is about making sure that gospel sounds as uplifting as possible.

Skepticism about Kanye’s new material and his new motivations are, of course, abound. Kanye is no different to anyone else pursuing piety; it’s a road beset with inconsistencies, contradictions and criticisms — both valid and vicious. But on the way, there are supernatural moments of joy and serenity that make it all worthwhile, and Sunday Service is where Kanye summons most of them. Here are five standout moments from the show.

Undoubtedly one of Jesus Is King‘s biggest grooves, “Follow God” was fleshed-out and given a new lease of life early in the set. Kanye’s words and rhymes rushed by in such a thrilling blur that he performed his verses of spiritual devotion twice, with either side of the Sunday Service choir singing the gospel loud enough for heaven to hear.

It was when Kenny G was called to the stage that L.A. knew God was truly in the house. Just the mention of his name was enough to send the Forum into a frenzy, and the Seattle sax machine was front and center during a sensational extended version of Jesus Is King standout “Use This Gospel.” Kanye watched adoringly as Kenny blew several solos, while No Malice and Pusha T dropped their verses, making the Clipse reunion real (“reunited in Jesus’ name,” noted Kanye). The entire crowd also got into the spirit, rapturously adding their voices to the song’s main refrain and creating a moment of pure, unbridled joy.

Among the dozens-strong choir was longtime Kanye-collaborator Francis Farewell Starlite (aka Francis and the Lights), who stepped forward to the piano to deliver a tender and beautiful version of his recent track “Take Me to the Light” (which also features Bon Iver). He’s a talent that is used sparingly by Kanye, but whenever called, Francis never fails to illuminate.

Kanye has spoken of his interest in revisiting parts of his catalogue with a more sanctified mind, and these two cuts from The Life of Pablo turned out to be early examples. “Fade” in particular enjoyed a more wholesale revamp, keeping just the panicky bass line and the opening “your love is fadin’/I feel it fade” hook, and rebuilding it to a sky-scraping spiritual. Definitely no room for Teyana Taylor to flex her abs and glutes here.

“What song do you wanna hear?” asked choir leader Jason White towards the set’s end. It was a semi-rhetorical question, because in this scenario, the answer was always going to be “Jesus Walks.” Anyone peddling the lazy narrative that Kanye West has suddenly (or cynically) found God for Jesus Is King should be immediately corrected. Religion, spirituality and higher powers have always been key to his work, and the rousing rendition of this 2004 single — backed by the ever-increasing power and musical muscle of the Sunday Service group — felt like a natural climax to the show.