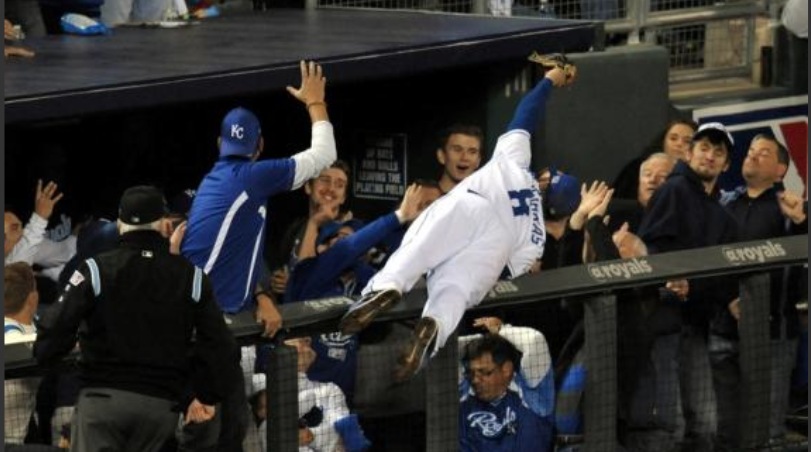 The Kansas City Royals are one win away from the World Series after a 2-1 victory over the Baltimore Orioles on Tuesday gave them a 3-0 lead in the American League Championship Series.

The Royals, who last played a part in the postseason when they won the 1985 World Series, are unbeaten in October and can wrap up the best-of-seven series in Kansas City on Wednesday.

“We are just trying to find a way to win each night. No matter what, any way we can, just find a way to win,” said Royals third baseman Mike Moustakas, who claimed a brilliant catch over the fence and into the crowd at one point.

“Our bullpen stepped up huge for us again. They have been doing it all year for us. Any time those guys get in the game we know they are going to lock it down for us.”

The Royals fell behind 1-0 in the second inning but got back on level terms in the fourth and moved ahead in the sixth before holding on for victory.

The go-ahead run came after pinch runner Jarrod Dyson trotted home on a Billy Butler sacrifice fly in the bottom of the sixth following earlier singles by Nori Aoki and Eric Hosmer.

Steve Pearce doubled for the Orioles in the second and then was driven in by J.J. Hardy in the next at bat as Hardy found the gap between right and center.

The home team’s comeback began in the fourth when Lorenzo Cain and Hosmer singled before Butler was walked to load the bases.

Alex Gordon ground out but it was enough to score Cain to knot the score at 1-1.

The Royals’ seventh straight win to start the postseason has tied the 2007 Rockies for the MLB record.

Kansas City are one win away from a trip to the World Series and Moustakas said they would try to keep the emotion in check ahead of Game Four.

“We are trying not to think too far ahead. We have to go out and beat this team again, they are a great team but we just have to find another way to beat them,” he said.