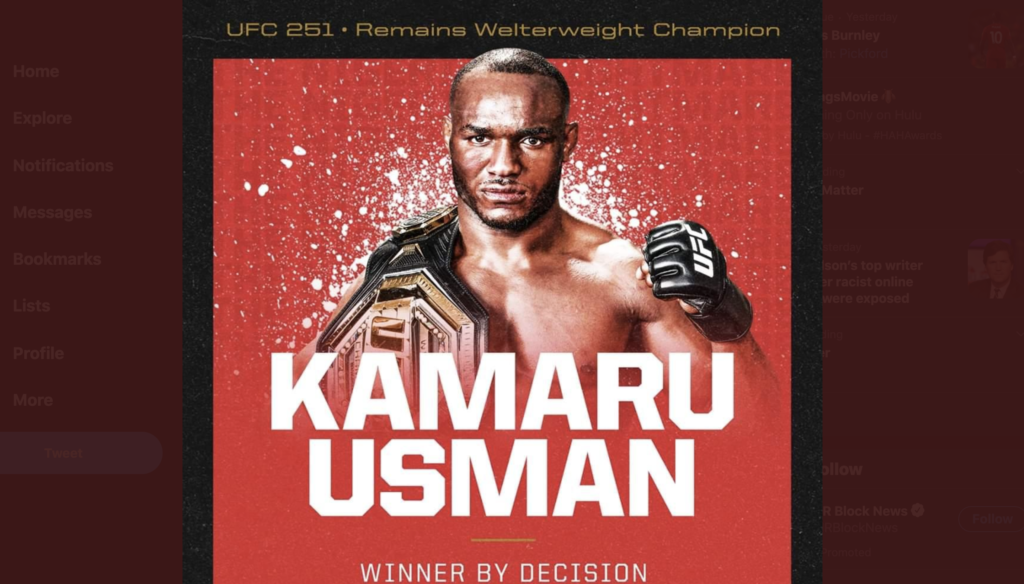 Welterweight champion Kamaru Usman retained his title with a unanimous decision victory over Jorge Masvidal at UFC 251 which was held on ‘Fight Island’ in Abu Dhabi.

The emirate’s Yas Island has been transformed into a closed-off fight zone able to stage four UFC events in July after UFC President Dana White secured it.

Masvidal was drafted in at six days notice to face Nigerian Usman and the American could not find an answer to Usman’s powerful wrestling game.

The 33-year-old successfully defended his belt with a gritty display to earn scores of 50-45, 50-45, 49-46 from the three judges after five gruelling rounds in an “octagon in the sand” without spectators.

Authorities set up a safety zone including an arena, hotel, training facilities and a restaurant which will only be open to fighters, coaches, UFC staff and other event personnel.

There are more than 2,500 UFC personnel and Yas Island employees staying within the zone, with all local staff having been in quarantine for 14 days.

Usman should have been fighting Gilbert Burns in the first main event of the four-event run but the Brazilian tested positive for coronavirus so Masvidal stepped in.

The 35-year-old American found a home for his strikes early on as he started the faster of the pair. He had a clear speed and accuracy advantage in the striking department and he stung the champion with multiple shots during the opening exchanges, while nullifying Usman’s early takedown attempts.

But Usman exerted constant pressure on the challenger as he denied Masvidal the time and space to throw his strikes. Usman looked to use his clinch work to wear on Masvidal, with much of the second round spent against the cage in a lengthy and gruelling exchange. The legacy of the round was a nasty cut above Masvidal’s right eye, courtesy of an accidental clash of heads.

A huge slam takedown from Usman was the biggest moment of the third round as the champion continued to smother Masvidal’s striking.

That pattern repeated through the final two rounds as Usman shut down Masvidal, who had earned his shot at the title with a trio of stoppage victories over Darren Till, Ben Askren and Nate Diaz in 2019.

Usman’s victory improved his record to 17-1 and extended his winning streak to 12 fights in the UFC.

“Jorge is a tough guy and I give him credit for that,” said Usman.

“They call him ‘Gamebred’ for a reason – he’s always game to fight. I’m just a level better. I have more tools in the toolbox.”