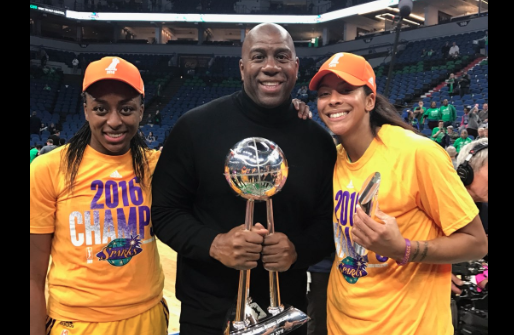 LA Sparks, Queens of the WNBA

In the final act of the WNBA’s 20th season, the Los Angeles Sparks and Minnesota Lynx put on a show that elevated women’s basketball and the WNBA to new heights.

The 2016 Finals featured the two preeminent teams in the league competing at the ultimate level game after game in a series decided by a single point scored with just 3.1 seconds remaining in a winner-take-all Game 5.

The culminating game of this incredible series featured outstanding play by some of the league’s brightest stars. L.A.’s Candace Parker had her best game of the series with 28 points, 12 rebounds and 3 steals on her way to earning Finals MVP honors.

“It was an unbelievable series,” Moore said even amid a disappointed Minnesota locker room. “So many great things came out of this series, so many great, talented athletes. Fight, will, people being resilient. Looking back, I don’t think either team should be ashamed, whoever came out on top. All season we’ve been the two to set the tone and it really was just an unbelievable end to a hard-fought series.”

There was high drama from the opening tip to the final buzzer with 24 lead changes, 11 ties and neither team leading by more than six points until a late Sparks run put them up by eight with 3:06 to play. The Lynx erased that lead in the span of 78 seconds with an 8-0 run to tie the game with 1:48 to play.

That set up a final sequence that had the Target Center crowd on its feet and fans at home on the edge of their couches and glued to the television.

“If you weren’t watching this series you missed out on some great, great basketball. This was WNBA at it’s finest,” said Penny Toler, the Sparks’ GM since 2001 who as a Sparks player scored the first basket in WNBA history.

The Lynx lost four games at home during the regular season and playoffs combined – three of those came at the hands of the Sparks. L.A. won the first and last game of the series at the Target Center by a combined three points.

In Game 1, it was Alana Beard’s buzzer-beating jumper from the corner that proved to be the difference. In Game 5, it was Ogwumike’s offensive rebound and putback that lifted the Sparks past the Lynx with the championship hanging in the balance.

“You think about the different playoff format that they implemented this year, and you couldn’t have a better series with the two top teams in the regular season competing against each other going through a five-game series, competing at the highest level,” said Minnesota’s Seimone Augustus after the game.

“We always talk about great players making great plays. Throughout the five games, you saw people rise to the occasion. Any given night there was any given player that could be the most important piece at that time.”

On a night that featured Game 5 of the National League Championship Series between the Chicago Cubs and Los Angeles Dodgers, a Thursday Night Football matchup between the Green Bay Packers and the Chicago Bears, a pair of college football games featuring Top 25 teams and a Stanley Cup rematch in the opening week of the NHL season, none could match the drama put forth by the final game of these WNBA Finals.

“This was what we needed, and I hope that we gained a lot of fans from around the world, around this country, and they really recognize how well women’s basketball is being played here in the USA,” said Augustus.

There’s someone else that turned away from the Dodgers to the Sparks and that’s the co-owner of both teams – Magic Johnson. The Hall of Famer and L.A. basketball icon was on hand for Game 4 in Los Angeles and was in Minnesota for Game 5 to watch the Sparks win the championship and celebrate with the team.