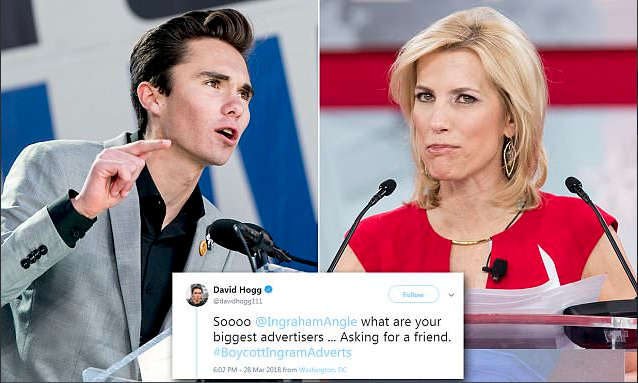 Laura Ingraham Should of Shut Up, Now The Money Is Going Away

At least six companies said on Thursday they were dropping advertisements from Laura Ingraham’s Fox News show after the conservative pundit mocked a teenage survivor of the Florida school massacre on Twitter and he responded with a call for a boycott.

Parkland student David Hogg, 17, tweeted a list of a dozen companies that advertise on “The Ingraham Angle” and urged his supporters to demand that they cancel their ads.

Hogg is a survivor of the Feb. 14 mass shooting that killed 17 people at Marjory Stoneman Douglas High School in the Parkland suburb of Fort Lauderdale. He and other classmates have become the faces of a new youth-led movement calling for tighter restrictions on firearms.

Hogg took aim at Ingraham’s advertisers after she taunted him on Twitter on Wednesday, accusing him of whining about being rejected by four colleges to which he had applied.

On Thursday, Ingraham tweeted an apology “in the spirit of Holy Week,” saying she was sorry for any hurt or upset she had caused Hogg or any of the “brave victims” of Parkland.

“For the record, I believe my show was the first to feature David … immediately after that horrific shooting and even noted how ‘poised’ he was given the tragedy,” Ingraham tweeted.

But her apology did not stop companies from departing.

Wayfair said in a statement that it supports dialogue and debate, but “the decision of an adult to personally criticize a high school student who has lost his classmates in an unspeakable tragedy is not consistent with our values.”

Replying to Hogg’s boycott call, Nutrish tweeted: “We are in the process of removing our ads from Laura Ingraham’s program.”

Responding to public pressure, Nestle wrote on Twitter that it had “no plans to buy ads on the show in future.”

Hulu said on Twitter: “We’d like to confirm that we are no longer advertising on Laura Ingraham’s show and are monitoring all of our ad placements carefully.”

CNBC cited a TripAdvisor spokesman as saying the company does not condone “inappropriate comments” by Ingraham that “cross the line of decency.”

TripAdvisor representatives did not immediately reply to a request for comment.

Expedia, which was not on Hogg’s list or another list of sponsors that Hogg retweeted, “no longer advertises on this show,” Expedia spokeswoman Maureen Thon said in an email.

Hogg wrote on Twitter that an apology just to mollify advertisers was insufficient. He said he would accept it only if Ingraham denounced the way Fox News treated him and his friends.

“It’s time to love thy neighbor, not mudsling at children,” Hogg tweeted.