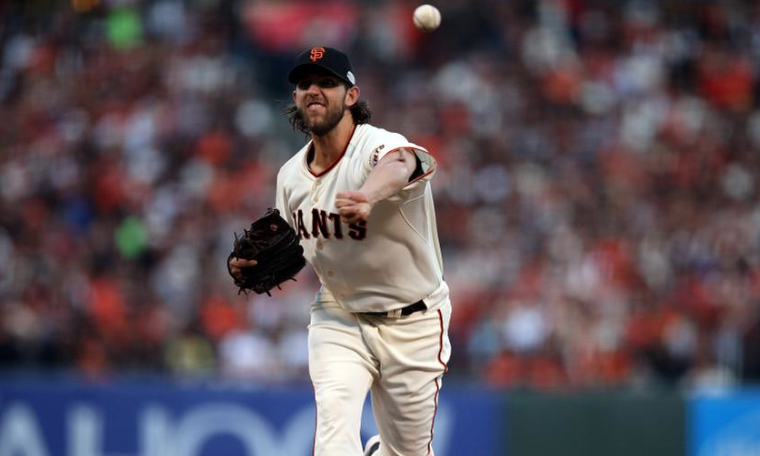 Madison Bumgarner and The Giants are One Win Away

With every pitch, Madison Bumgarner etched his place among the World Series greats.

The long, tall lefty kept slinging away and put the San Francisco Giants just one win from yet another championship, throwing a four-hitter to beat the Kansas City Royals 5-0 Sunday night for a 3-2 Series edge.

Bumgarner was simply untouchable – again. As “MVP! MVP!” chants broke out from each packed corner of AT&T Park, Bumgarner finished off the first World Series shutout in 11 years.

“You know what? For some reason, I keep getting really lucky this time of year, so I’ll take it,” Bumgarner said.

It must be more than luck.

Because by the time the 25-year-old from Hickory, North Carolina, outdid his own winning performance in Game 1, he had evoked memories of Bob Gibson, Sandy Koufax, Curt Schilling and the top October aces of all-time.

He certainly joined those names, and maybe even exceeded them.

Who else has gone 4-0 in four World Series starts with an 0.29 ERA? Throw in only 12 hits in 31 innings, along with 27 strikeouts, and that math makes him the very definition of Big Game Pitcher.

“He’s special, isn’t he?” manager Bruce Bochy said during a quiet moment in his office eating dinner. “What a stud.”

On this evening, Bumgarner fanned eight without a walk and never was in trouble as he constantly changed speeds, with no runners reaching third base. There hadn’t been a shutout in the Series since Josh Beckett’s clinching gem for the Florida Marlins in 2003 at Yankee Stadium.

The Giants’ work isn’t done. To add to the crowns Bumgarner helped them take in 2010 and 2012, they’ll need to win in Kansas City.

“We’re looking forward to getting back to our home crowd, where it’s going to be absolutely wild and crazy,” Royals manager Ned Yost said.

Hunter Pence once again was in the middle of things for Giants. He singled off James Shields in the second and scored on a groundout by Brandon Crawford, who had three RBIs.

Later, the enigmatic Pence accidentally threw his bat past the mound while striking out, and appeared to apologize to Shields. Pence added another hit in a three-run eighth, making him 9 for 19 in the five games.

Postseason star Pablo Sandoval also singled twice. Juan Perez broke it open with a two-run double off the top of the center-field fence in the eighth against Wade Davis and scored on a single by Crawford.

Since trailing 4-1 in Game 4, the Giants have responded with 15 straight runs. San Francisco won that game, putting aside concern that Bumgarner should’ve been moved up to pitch on short rest.

Bumgarner won for the fourth time against one loss in this postseason, and this blanking bookended the four-hit shutout he threw at Pittsburgh in the NL wild-card game. Durable, he’s thrown 47 2-3 innings this October, trailing just Schilling’s 48 1-3 in 2001 for the most in a single postseason, with a 1.13 ERA.

The 6-foot-5 Bumgarner definitely has an impressive whip, along with an imposing WHIP in the World Series. His walks-plus-hits ratio per inning is incredible.

About the only thing Bumgarner didn’t do well was get a hit. He takes pride in his plate prowess and launched four home runs this season, including two grand slams. Bumgarner went 0 for 4, leaving him hitless in 22 postseason at-bats.