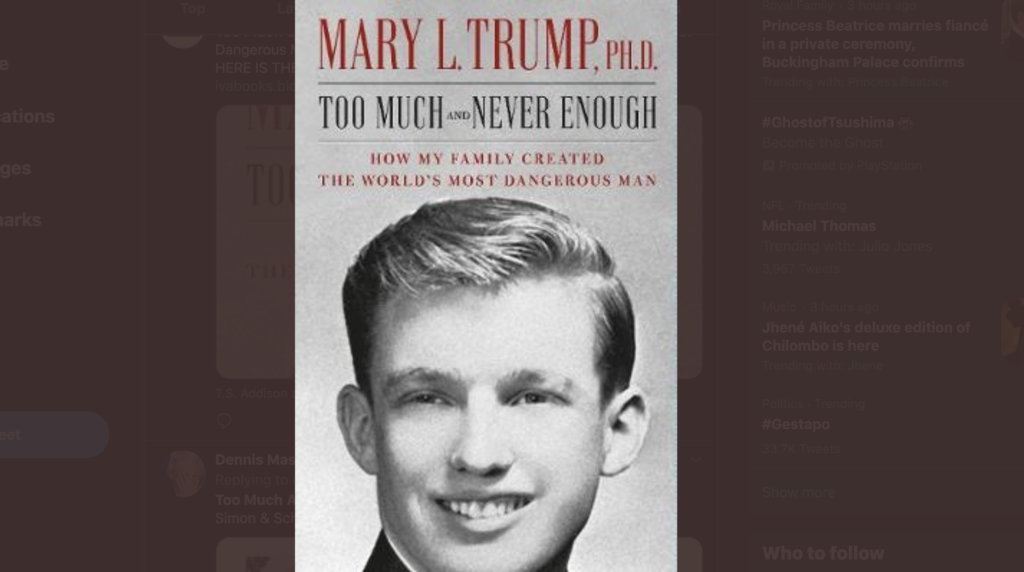 Looks like a lot of people want to read about the president’s psychological back story. “Too Much and Never Enough: How My Family Created the World’s Most Dangerous Man” by Mary L. Trump has set a first-day sales record for Simon & Schuster, the publisher announced Thursday.

The memoir about life in the Trump family and its effects on the psyche of the current commander in chief sold 950,000 copies through Tuesday, the book’s first day of sales, the publisher said in a release. That includes presale orders of all formats.

“‘Too Much and Never Enough’ has entered the national conversation in a way that few books ever do, becoming a cultural phenomenon and must-read for anyone seeking to understand the singular family dynamic that produced the most powerful man in the world today. It is at once a revealing psychological portrait and a work of historic importance,” Simon & Schuster chief executive Jonathan Karp said in a statement.

Presale and first-day sales numbers are higher now than ever before — and more important to a book’s trajectory, akin to opening-weekend box-office numbers for movies. Online pre-orders have become an essential element of publishers’ sales plans.

Previous big sellers for S&S include Bob Woodward’s September 2018 effort “Fear: Trump in the White House,” which notched 750,000 copies in presales and first-day sales combined. At the time, “Fear” was the biggest pre-seller in the publisher’s history.

Highly anticipated fiction has sold better than headline-making nonfiction in the past, with Dan Brown’s novel “The Lost Symbol” hitting 1 million in first-day sales in 2009.

And Trump simply cannot compete with Voldemort. In 2007, J.K. Rowling’s “Harry Potter and the Deathly Hallows,” the seventh and final book in the best-selling “Harry Potter” series, sold 8.3 million copies by the end of its first day on the market.