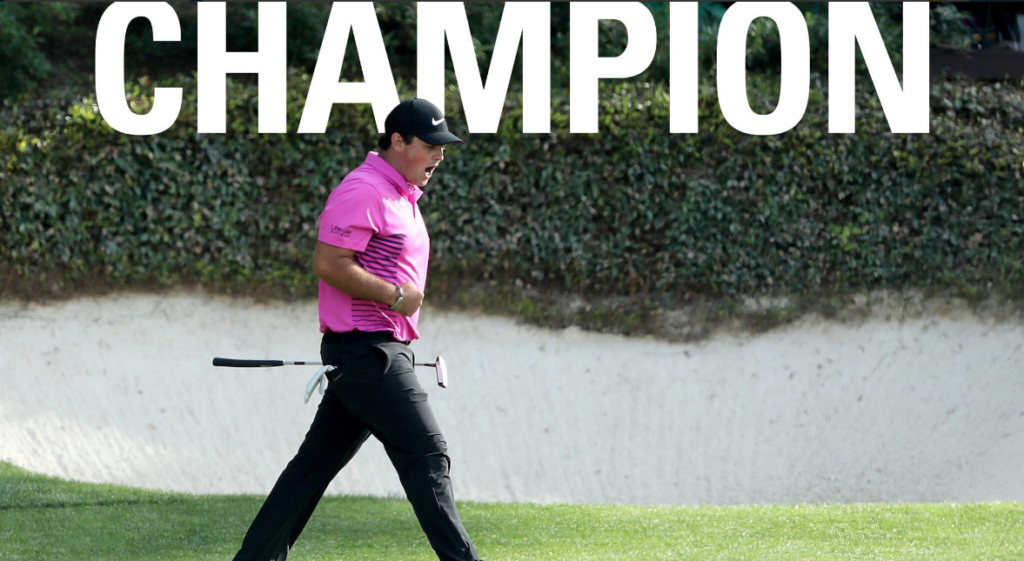 Masterful. Golf Has A New Star

Patrick Reed got some laughs a few years back when he declared himself a top five player, with little on his resume to back it up.

No one is laughing now.

Reed’s breakthrough win in the Masters didn’t officially move him into the top five — he’s now No. 11 in the world — but it certainly moved him into the conversation when the debate turns to major championships.

As well it should, after Reed handled not only the golf course but the suffocating pressure of a Sunday at the Masters to win his first major. Playing in the same group as four-time major winner Rory McIlroy, he didn’t flinch even as Jordan Spieth and Rickie Fowler made late runs at him.

The player known for a sometimes prickly attitude may have even won a few fans over in the process.

They cheered for McIlroy on the first tee, certain that he was going to overcome a three-shot deficit and win his first green jacket. But it was Reed who got the final cheers when he calmly sank a 3-footer on the 18th green for a final round 71 to win by a shot over Fowler and two over Spieth.

“I walked up to the first tee and had a really welcoming cheer from the fans, but then when Rory walked up to the tee, you know, his cheer was a little louder,” Reed said. “But that’s another thing that just kind of played into my hand. Not only did it fuel my fire a little bit, but also, it just takes the pressure off of me and adds it back to him.”

Known as “Captain America” for his play in the Ryder Cup, Reed added a far more important title: Masters champion. He did it by playing steady to protect a three-shot lead as some of the biggest names in golf tried to chase him down.

And if he wasn’t exactly lacking for confidence before, winning the green jacket should give him even more of a strut.

“He’s not scared. I think you guys have seen that previous from the Ryder Cups and the way he plays,” said Fowler, who closed with a 67. “He won’t back down. I don’t necessarily see him as someone that backs up and will let you come back into the tournament. You have to go catch him.”

Only Spieth managed to do that on a cool but sunny afternoon on an Augusta National course that was giving up birdies in bunches. Spieth, who started the day nine strokes down, briefly drew into a tie for the lead with a long birdie putt on No. 16, but Reed birdied No. 14 behind him to retake the lead and held on for the win.

Had Spieth pulled it off it would have been the greatest comeback in Masters history, but he bogeyed his final hole for a 64 that was one shot off the course record.

“I think I’ve proven to myself and to others that you never give up,” Spieth said. “I started the round nine shots back and I came out with the idea of just playing the golf course and having a lot of fun doing it and try to shoot a low round and finish the tournament strong and see what happens, if something crazy happens.”

The 27-year-old Texan also survived a late move by Fowler, whose final hole birdie forced Reed to make par on No. 18 to win. He did just that, rolling a 25-foot putt down the scary slope on the final green, then calmly sinking the putt to win.

“I knew it was going to be a dogfight,” Reed said. “It’s just a way of God basically saying, ‘Let’s see if you have it.’ Everyone knows you have it physically with the talent. But do you have it mentally? Can you handle the ups and downs throughout the round?”

McIlroy, meanwhile, will have to wait another year for a shot at the career Grand Slam after his disappointing round.

Trailing by three shots to start the final round, he closed to within one shot after two holes. That was as close as he came. McIlroy’s putter betrayed him — he missed four putts inside 10 feet on the front nine — and he was never a factor on the back nine. He closed with a 74 and tied for fifth.

“Tough day, but I’ll be back,” McIlroy said. “And hopefully, I’ll be better.”

Reed is old-school among his generation, with a brash attitude and a willingness to speak his mind. He has never been terribly popular in this state, mainly because of allegations of bad behavior while playing for Georgia that led to an early departure from the Bulldogs. He transferred to Augusta State and led the outmanned Jaguars to a pair of NCAA titles. His parents live in Augusta, but were not at the tournament. They weren’t at his wedding in 2012, a relationship Reed chooses not to discuss.

He did both on Sunday on the biggest stage in golf.