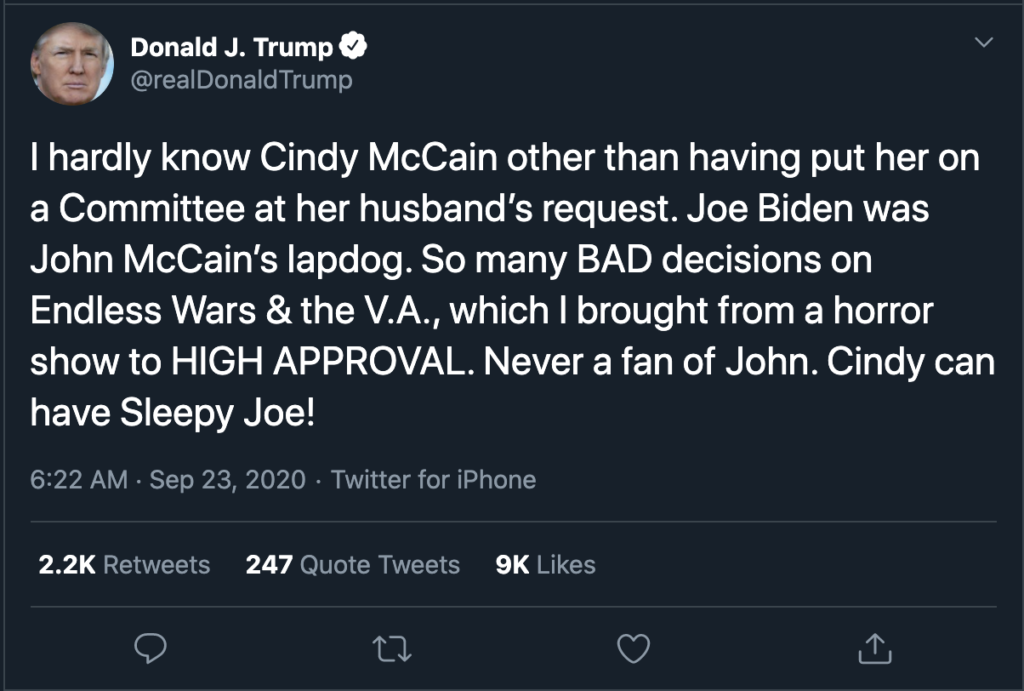 Praising Joe Biden as a longtime family friend and an ally to military families like hers, Cindy McCain, the woman Republicans wanted to make first lady in 2008, is endorsing the Democratic presidential nominee.

McCain on Tuesday avoided directly criticizing President Donald Trump, who had a stormy rivalry with her husband, the late Sen. John McCain, R-Ariz., that lingered even after his death in 2018.

Her endorsement comes just weeks before Arizonans are set to begin voting and after anonymous sources claimed to The Atlantic that Trump ridiculed McCain and others in the military throughout his term in office.

McCain declined to speak about the impact she believes Trump would have on the nation, and globally, should he win a second term.

Instead, she told The Arizona Republic in an interview Tuesday that her endorsement is in part attributable to the character she sees in Biden, a longtime friend of the family who, like her, is a parent to troops who have served the United States in the military.

The decision, she said, was not about honoring her husband’s legacy. This was about her.

“I’m like everybody else: I like a good leader and I feel like right now the president doesn’t have my back, he doesn’t take a stand on things that are really important and we have a time of crisis,” Cindy McCain said. “I’m worried that this could go further than it should. My point in getting on board with Joe is that he’s proven — he’s been there. I’ve known him for 40 years. I know his character and his leadership and his honor and his integrity and those things are very important to me.”

McCain said she will remain a registered Republican. She said Biden practices the kind of bipartisan politics her husband did: “Joe shares our values and our concerns and he cares about us. I’m a mother, I’m a business owner, I’m the mother of two military men and I want someone that understands me and understands what’s going on and knows what it takes to really make the tough decisions.”

McCain had been thinking about the decision to endorse Biden for some time. She said he did not ask for her endorsement but was “excited” when she told him of her decision a few weeks ago.

“It had nothing to do with John McCain at all; it had everything to do with how I felt and how I’m feeling, especially during these tough times,” she said, noting Biden’s respect for the military.

McCain’s endorsement, which she announced from her home in Phoenix, comes as Biden is leading polls nationally and more narrowly in Arizona, which is expected to be a critical battleground for the White House.

Biden announced the endorsement earlier in the day, telling reporters she was backing him because of The Atlantic’s article.

“Maybe I shouldn’t say it but I’m about to go on one of these Zooms with John McCain’s wife, who is first time ever is endorsing me because of what he talks about with my son and John’s who are heroes, who served their country, you know he said they’re losers, they’re suckers,” Biden said Tuesday at a fundraiser.

McCain has resisted injecting herself in partisan politics, largely avoiding the controversies that involved Trump and her husband since Trump first entered presidential politics. She has throughout her public life advocated less-partisan causes, such as ending human trafficking and aid to third-world countries.

“It is OK to look outside the box, it is OK to cross a party line and vote for someone else that’s perhaps not of your party but is perhaps a better candidate,” she said. “I hope I have an impact, I hope what I’m doing is important and I just hope that Joe wins.”

McCain’s endorsement comes weeks after she appeared in a video played during the Democratic National Convention that paid tribute to her husband and the long friendship he and Biden maintained in Washington. That video, overlaid with photos and footage of the two men, sought to remind America of the type of bipartisanship and collegiality that once defined Washington. It stopped short of an endorsement of Biden.

The McCain-Biden friendship extended from politics to their home life, where the families celebrated milestones, hosted family get-togethers and, at the end of McCain’s life at the family home in Cornville, reflected on their adventures of days past.

McCain, along with her daughter, TV commentator Meghan McCain, have been at times outspoken critics against Trump, whose feud with the late senator dates to 2015, when Trump launched his first presidential bid. The McCain women occasionally speak out against Trump, but these days, tend to only speak out in such a forceful manner when he re-airs his grievances.

McCain did not weigh in on Arizona’s closely watched U.S. Senate special election, where two well-funded candidates are vying to fill the remainder of her husband’s term.

Kelly is scheduled to appear on ABC’s “The View,” with Meghan and other co-hosts on Wednesday.

Cindy McCain told The Republic she would not be getting involved in Arizona politics this cycle or that particular race.