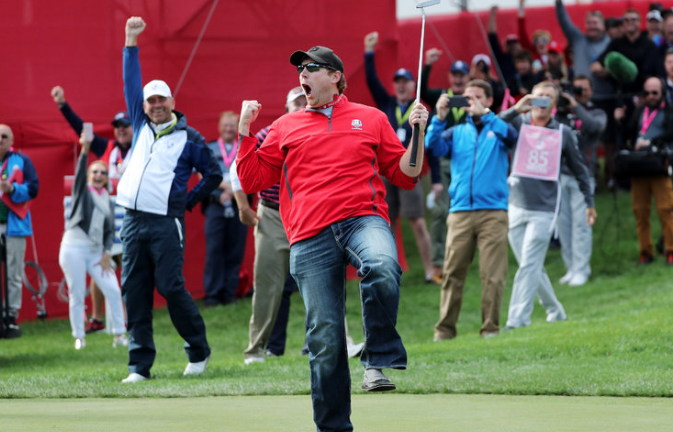 ‘Merica, Where We Talk Shit and Back It Up!

The Ryder Cup had not yet started.

But when an American heckler found himself with the opportunity to sink a putt that had flummoxed a group of European professionals during a practice round on Thursday, the rivalry at the biennial competition got an early start.

The heckler, David Johnson of Mayville, N.D., had been lobbing criticism at Rory McIlroy of Northern Ireland and Andy Sullivan of England as they missed repeated attempts at a 12-foot putt during a practice session at the Hazeltine National Golf Club in Chaska, Minn.

Johnson, expressing a common sentiment from couch-bound golf fans, yelled to the group of European golfers that he could have made the putt. So Henrik Stenson, the reigning British Open champion and a member of the European team, pulled Johnson from the crowd and gave him a chance to do just that.

As Johnson, clad in bluejeans, a red pullover and a baseball cap, weighed which of the pros’ putters he wanted to use, chants of “U-S-A” broke out among the spectators.

He was lining up his shot when Justin Rose, the fourth member of the European team present, jogged out to the green and upped the ante, laying a $100 bill beside the ball.

It was Johnson’s turn to be heckled.

“No pressure,” a member of the crowd shouted.

Johnson did not appear to feel any. Wasting little time, he hit the ball cleanly, sending it straight into the hole.

The crowd roared as Johnson gave an enormous fist pump and solicited hugs and high fives from the appreciative professionals.

“The boys were cupping out, missing it low,” Rose told the BBC. “And this guy just ripped it into the middle. Fair play to him.”

Johnson could have continued to play it cool. But during an interview that was posted to YouTube by a reporter from The St. Paul Pioneer Press, he quickly reverted to the role of star-struck fan, asking which golfer had laid out the $100 bill.

Informed that it had been Rose, he asked, “Is there any way that you could have him sign it for me?”

“Man, that was fun!” he continued. “What just happened?”