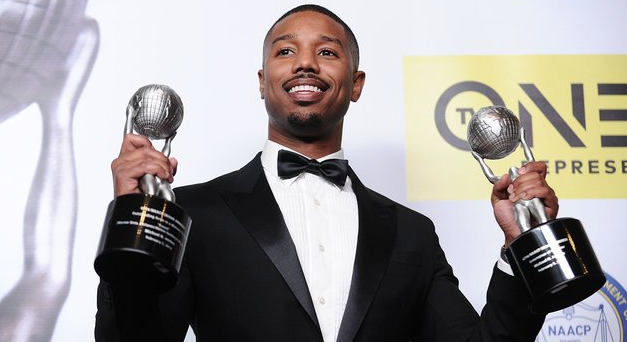 Michael B Jordan Steals the Show at NAACP Image Awards

It was a total knockout for Michael B. Jordan at the NAACP Image Awards in a ceremony that took several jabs at Hollywood for the lack of racial diversity.

The star of the boxing drama “Creed” was honored Friday as both the entertainer of the year and outstanding actor in a motion picture for his role as Apollo Creed’s son.

“I used to sneak into the Image Awards, and now I’m standing here as the entertainer of the year, which is mind-blowing,” he said.

“Straight Outta Compton,” which tells the story of the pioneering rap group N.W.A., picked up the outstanding motion picture prize.

“I want to thank the NAACP for this because without you riding for us for the last 100 years, we would not be standing here,” director F. Gary Gray said.

Image Awards host Anthony Anderson kicked off the ceremony by invoking N.W.A. for a rap about the lack of racial diversity at other awards shows.

The “black-ish” star donned a gold chain and a baseball cap with the words “Nominees With Attitude” to sing about such snubs as “Beasts of No Nation” and Jordan at the Academy Awards.

Anderson later joked during his opening monologue that he didn’t want the Academy Awards to go overboard in response to the #OscarsSoWhite controversy by honoring a movie like “Madea Goes Trick or Treating in Compton” as best picture or handing out Kevin Harts instead of Oscars.

“Hollywood needs to know that this is what diversity is supposed to look like,” a more serious Anderson told the crowd at the Pasadena Civic Auditorium.

When he walked on stage to present “Creed” as an outstanding motion picture contender, Sylvester Stallone was surprised to be greeted warmly by the audience.

“I certainly didn’t expect that,” said the “Rocky” star, who failed to recognize Jordan and “Creed” filmmaker Ryan Coogler in his acceptance speech at last month’s Golden Globes. He later returned to the stage to thank them and apologized on Twitter.

Will Smith, Jada Pinkett Smith and Spike Lee were among this year’s Image Awards attendees who said they won’t attend this year’s Oscar ceremony after a second year of mostly white nominees.

Despite several comments – both mocking and thoughtful – about the lack of racial diversity in Hollywood, it was mostly show business as usual for the 47th Image Awards, which are presented by the National Association for the Advancement of Colored People to honor people of color in entertainment.

On the TV drama side, “Empire” dominated with wins for outstanding drama series, actor and actress for Terrence Howard and Taraji P. Henson.

“We don’t need to ask for acceptance from anyone,” Henson said. “We are enough.”

Sanaa Lathan was awarded the trophy for best actress in a motion picture for her role as a terrorized lobbyist in “The Perfect Guy.”

John Legend received the NAACP President’s Award, which recognizes those who have achieved career success and public service. In his speech, the singer-songwriter lauded activists who fight for social justice.

“Despite the daunting problems, I am hopeful that our generation will demand and achieve radical change in our lifetime,” said Legend after he performed “All of Me.”

For the first time, the NAACP Chairman’s Award, which honors distinguished public service, was presented to eight recipients, including pastor Jamal Bryant, “Empire” actor Jussie Smollett and the activist group Concerned Student Collective 1950 at the University of Missouri, Columbia. The winners joined together on stage with their fists raised in the air.

Below are all of the winners for the 47th NAACP Image Awards.

Outstanding Actor in a Comedy Series

Outstanding Actress in a Comedy Series

Outstanding Actor in a Drama Series

Outstanding Actress in a Drama Series

Outstanding Actor in a Motion Picture

Outstanding Actress in a Motion Picture

Entertainer of the Year

“Welcome to Sweetie Pie’s” (OWN)

Outstanding Host in a News, Talk, Reality, or Variety Program (Series or Special) – Individual or Ensemble

“Back Together” – Jill Scott (Atlantic Records)

“Between The World and Me” – Ta-Nehisi Coates (Speigel & Grau)

“Beasts of No Nation” (Netflix)

“The Black Panthers:  Vanguard of the Revolution” (PBS Distribution/Firelight Films)

Outstanding Writing in a Comedy Series

Outstanding Writing in a Drama Series

Outstanding Directing in a Comedy Series

Outstanding Directing in a Drama Series